US Recession Watch, May 2020 - US Yield Curve Hides the Truth

From bad to worse to worst, the US economy is in the midst of an outright economic freefall. Week after week, initial jobless claims above 2 million have seen around 40 million Americans lose their jobs since the start of the coronavirus pandemic. Despite what the US Treasury yield curve has been signaling – less than a 20% chance of a recession within the next 12-months – it’s obvious that fears of a major economic contraction are well-founded. [We’ll explore why the US Treasury yield curve is no longer a viable indicator in this regard towards the end of this note.]

US Economic Data as Bad as It’s Ever Been

While the April US jobs report produced an unemployment rate below 15%, the reality is that is very likely already above 20%. In turn, market participants are expecting the worst: not just the steepest rate of contraction since The Great Recession in Q1’20; but the fastest contraction in the post-World War II era – yes, going back to The Great Depression. 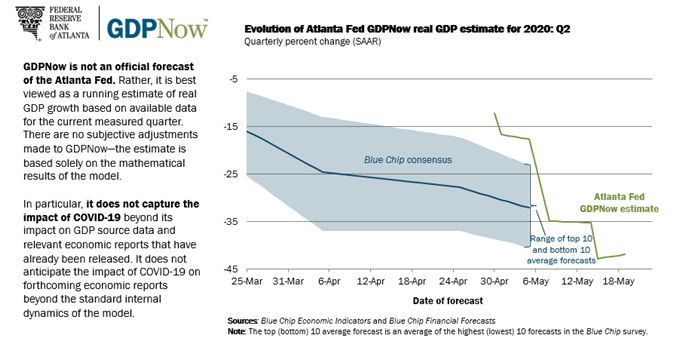 Accordingly, the Atlanta Fed GDPNow Q2’20 growth forecast has plunged dramatically in recent days, from -12% at the first estimate in early-May to -34.9% where it stands today. Banks and economic forecasting institutes have been predicting that Q2’20 will be produce an annualized GDP in the neighborhood of -20% to -40%.

The Federal Reserve has done everything that they intend on doing on the interest rate front, given recent commentary from various Fed policymakers, including Fed Chair Jerome Powell. The Fed’s various liquidity facilities have seen the Fed balance sheet balloon north of $6 trillion, easily surpassing the heights seen during The Great Recession. 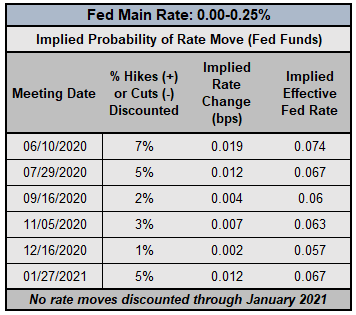 There’s been no indication that the Fed plans on moving rates into negative territory, and as a result, we’ve reached the lower bound for the time being. To this end, any suggestions by rates markets that a rate hike is coming anytime soon is a pricing quirk to be ignored.

Yet with that said, that doesn’t mean there aren’t other options besides negative interest rates: an extended forward guidance; yield curve control; or even nominal GDP targeting. There remain quite a few tools left in the Fed’s tool kit before the market may need to consider before seriously pricing in the prospect of negative interest rates from the Fed.

The US Treasury yield curve has normalized – long-end yields are higher than short-end yields – but that’s not an accurate reflection of the state of the US economy. Historically, the relatively faster rise by long-end yields compared to short-end yields occurs during times of expected economic expansion, so traders may be prone to interpret the yield curve movements as a sign that market participants believe that the worst period of uncertainty around the coronavirus pandemic is over. 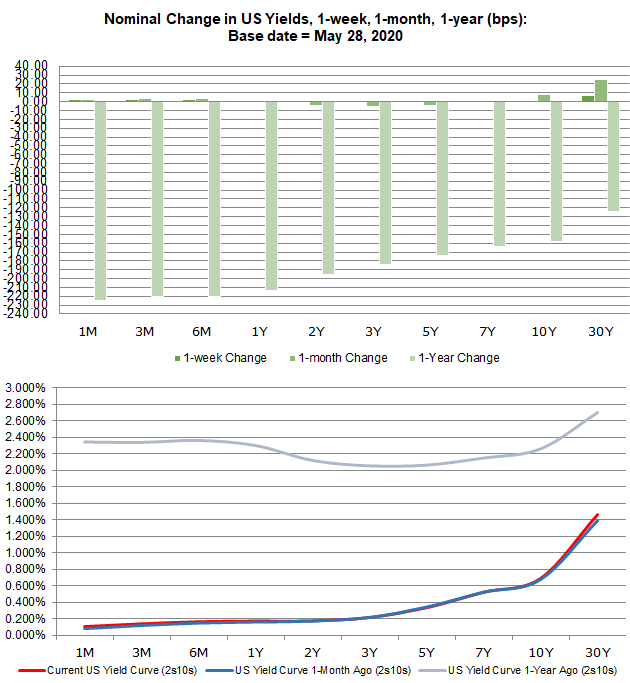 Of course, the Fed’s actions to flood the market with liquidity, ensuring the solvent companies facing cash crunches don’t get thrown out with the insolvent companies ill-suited to weather this crisis, has help depress short-end yields and artificially lead to a steepening of the US yield curve. Yet it is worth noting that the US yield curve may be offering one sign that is actually worth observing: long-end yields are viewed as a proxy for growth and inflation expectations, and they remain significantly depressed from where they stood a few months ago, nevermind a year ago. US recession odds remain artificially low, according to the relationship provided by the Treasury spreads. Efforts by the Federal Reserve to buoy risk appetite have alleviated short-term fears, in a sense that the 1-month bill yield is now the lowest on the curve (as it should be in normal circumstances). To this end, there is currently a 19.5% chance of a US recession in the next 12-months, per the NY Fed Recession Probability Indicator; a likelihood we deem to be far, far too low.

Conclusions about the US Yield Curve and US Recession Odds

The coronavirus pandemic is an economic crisis unseen in nearly any of our lifetimes (very few people today were alive during the 1918 Spanish flu), so it’s difficult to properly measure the severity of this crisis given the fact that we don’t have any experiential memory to build upon (episodic memories seem to have been ignored).

But the simple truths are that we’ve seen the sharpest drop in US growth expectations and the fastest collapse in the US labor market, ever. We can say with a high degree of confidence that the US economy is entering a recession (depression?) in the very near-term, regardless of what the Fed-distorted US Treasury yield curve is otherwise suggesting.