Working in the financial sector brings with it many positives. It can however mean that individuals spend all their time monitoring the value of markets such as the S&P 500 and commodities that individuals are dealing with, and not spend any time taking stock of their own value and what the best opportunities for them as individuals may be.

DailyFX has undertaken research on the top 20 cities in the Global Financial Centres Index (GFCI), to produce a report consisting of data on finance and graduate vacancies per location, individual roles with the most availability and the most financially lucrative cities for each of these roles. As well as focusing on the wider financial industry there are also specific reports for Trading. Take a look below at the findings from our research - “The Financial & Trading Skills Index”.

The research and data used in this study were taken and analyzed in January 2020 before the COVID-19 pandemic had impacted global financial markets. This study can be used as a reference to the foundations and change in the health of the financial job market as the world faces a historic shift. 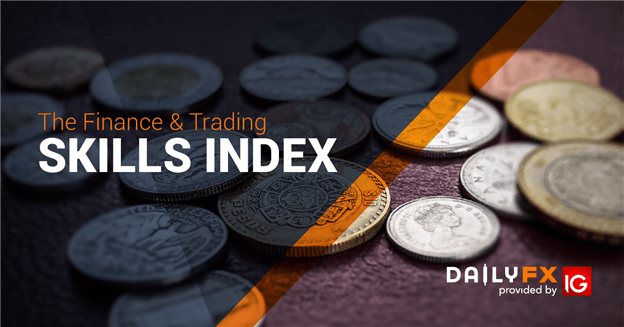 With the top 20 GFCI ranked cities, we researched the number of opportunities available in each city. This data was then broken down to view the number of roles available for Graduates or Juniors and the locations that offered the most roles. It was found that in 2019 the number of graduate roles in banking & financial institutions dropped compared to the year before, but with a predicted 3.3% rise in graduate vacancies in 2020 the data below provides clear information on which of the top 20 cities is providing the most opportunity for future and current industry professionals. 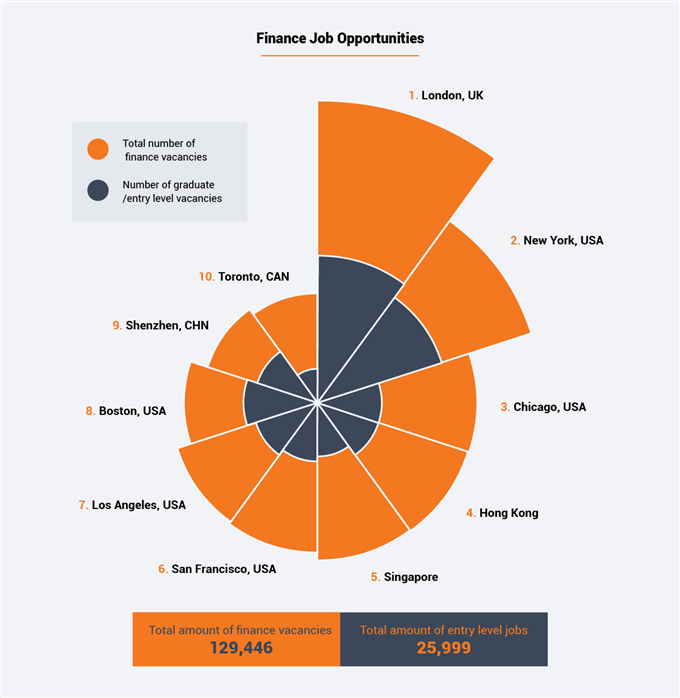 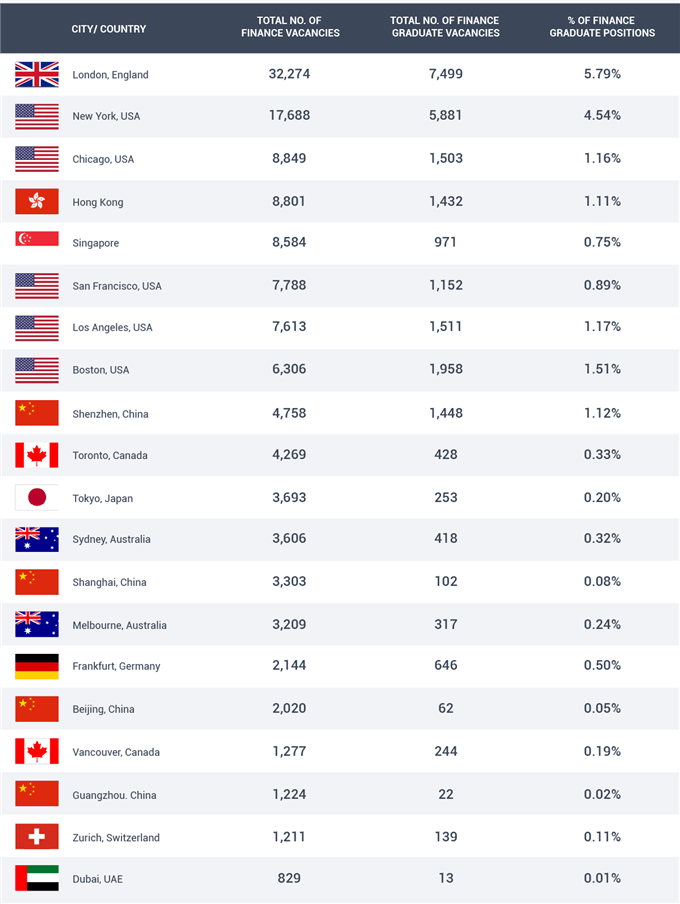 Leading the opportunity index is London, with New York joining it at the top of our findings. Both cities provide significantly more opportunities for current professionals than their nearest rivals and graduates with 5.54% and 4.54% of all vacancies at graduate level. While other locations performed well, in the majority of cases the percentage of vacancies aimed at graduates was well below 1%. Our results show that the worst location for graduates to look for a new role is Dubai with only 0.01% of all roles destined for graduates. 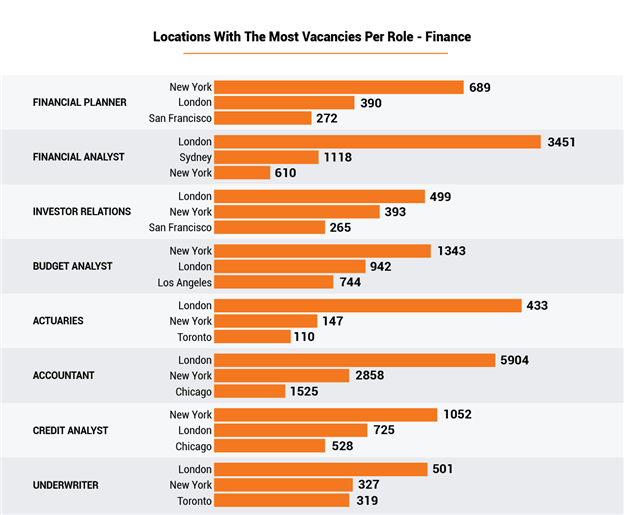 Breaking these opportunities down further DailyFX looked at the most popular roles and where they appeared most frequently. New York and London continue to appear frequently as the leading locations while the rest of the results are largely influenced by the supporting US cities Chicago, San Francisco and Los Angeles. When taking into consideration all locations researched, the individual roles of Accountant (18,972), Financial Analyst (8,104), and Budget Analyst (6,804) are the most in demand roles in the financial industry.

Perhaps surprisingly Toronto has a high demand for Actuaries (110), and Financial Analysts should head for Sydney (1,118) where there is an increased percentage of roles in comparison to the other roles and locations. These are the only occasions when a city outside of the UK & US breaks into the top three for a role.

As well as understanding the number of opportunities available, being able to balance this against the remuneration received for fulfilling the role is always an important consideration.

Yet again we see a location concentration of only four different locations, all based in the US, making it into the top three. San Francisco consistently provides the highest salary for each role with Financial Planner and Actuaries the only roles finding higher salaries elsewhere in Boston and New York respectively.

In understanding the locations where the most can be made from each role DailyFX also looked at comparing the varying salaries between roles to understand which roles are financially valued more highly than others. 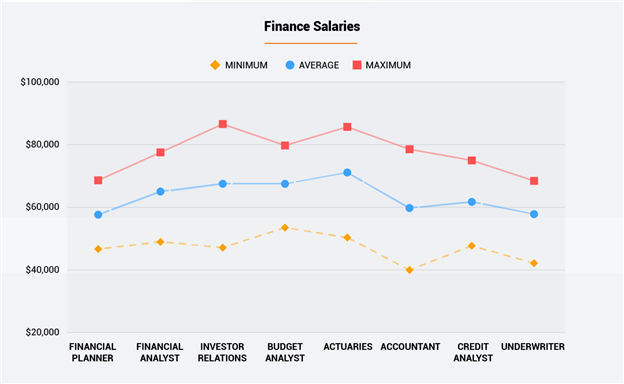 Actuaries continue to earn good equivalent salaries at all three of the comparison levels shown. Budget Analysts have the highest minimum salary of $53,501 while Investor Relations can achieve the highest maximum salary at $86,587.

One of the roles with a wide range in potential salary is Accountant. The research found that this role, which was most in demand according to vacancy data, has the lowest minimum salary of all roles analyzed at $39,942. Its maximum offered salary peaks at $78,523 but the overall average of $59,763 places it as the third lowest earning average salary.

While much of this data can be used as a guideline, many of the skills underpinning these industry roles are what many vacancies will be looking for. DailyFX undertook further research using the 20 most commonly appearing skills & experience criteria to understand how each particular skill and experience is valued in the industry. This was then used to reveal how the inclusion of each impacts the potential salary offered. 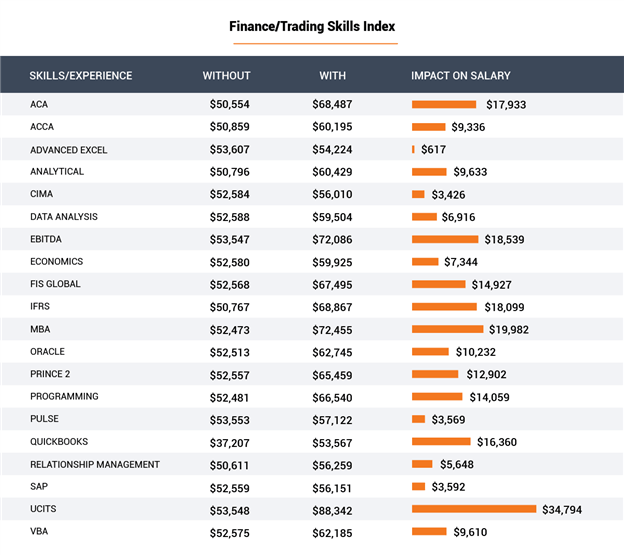 Experience with UCITS (The Undertakings for Collective Investment in Transferable Securities Directive 2009) showed the most improvement in potential salary returned at $34,794. Experience with areas such as EBITDA and IFRS were also highly beneficial, potentially increasing salaries by $18,539 and $18,099 respectively.

The findings show that while finance focused qualifications/experience is the most important, it also demonstrates that the addition of project management skills, such as Prince2, and competency with varying computer programs like Quickbooks and VBA (Visual Basic for Applications) in advanced excel knowledge can combine to make significant increases to your salary.

Following the same pattern as with the wider financial analysis, the following images demonstrate the results of the research with a trading industry focus. The following research comprises of European, Oceanic, and North American locations. 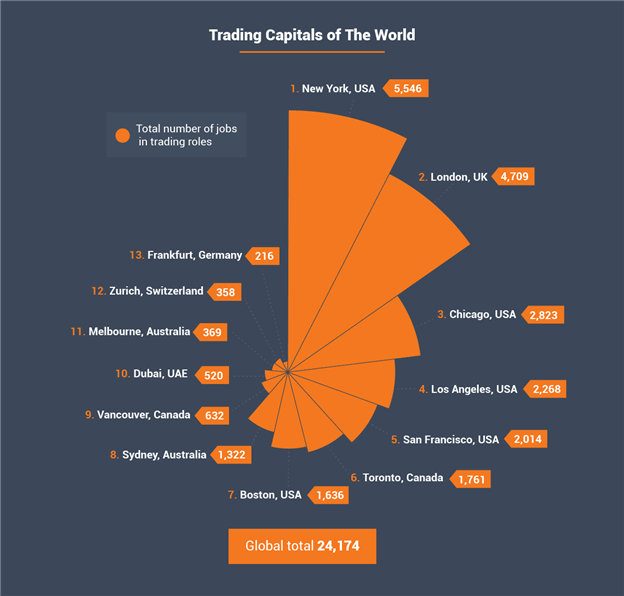 New York provides the most opportunities for those in trading roles. Combined with London they make up 42% of all trading roles available at the time of research. The US provides the bulk of the locations, 59% of the 24,174 trading roles, with only Zurich and Frankfurt providing Europe’s next best locations.

The individual roles included for the below graph are the most common roles listed. 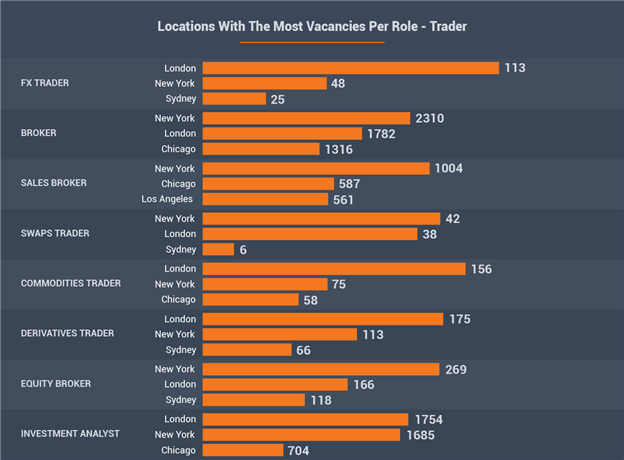 When it comes to trading London is no longer the only non-US location, as Sydney provides plenty of job opportunities for traders, especially Derivatives and FX Traders. London appears to provide the majority of roles for traders with New York and Chicago making up the rest of the top three. The most opportunities for individual roles are within Investment Analysts, FX Traders and Brokers.

The locations providing the top salaries are the top US Cities with San Francisco, Boston, Los Angeles, Chicago and New York dominating the top locations and London only appearing for Commodities Trader & Equity Broker.

Recommended by Research
Traits of Successful Traders
Get My Guide