As India approaches the expiration of extended lockdown measures this Sunday, the Indian Rupee may still face a challenging fundamental landscape. In late April, I warned that gains in INR could be short-lived if the nation extends social distancing measures. Since then, the currency has been in much of a congestion range against the US Dollar.

The nation is mulling resuming commercials flights by May 18 or perhaps sooner, but India seems to be struggling to make further inroads into lowering average case growth over a rolling weekly period. Meanwhile Markit India services and manufacturing PMI clocked in at a record-low 5.4 and 27.4 in April, down from 49.3 and 51.8 in March. Values below 50 indicate increasingly larger contractions in business activity.

According to the Centre for Monitoring the Indian Economy (CMIE), the unemployment rate is estimated to be at a record-high 27.1 percent. To help cope with the economic severity of the coronavirus outbreak, both fiscal and monetary authorities have jumped into action. Though there have been rising calls for more of the former. The government has thus far delivered on about INR1.7 trillion in stimulus, or about 0.8% of GDP.

In response, Prime Minister Narendra Modi outlined a plan to borrow INR12 trillion this fiscal year which is 54% more than what was budgeted. However, this plan could risk leaving out the corporate sector as state companies tend to account for most of local debt issuance. That may further inflate yields on domestic corporate bonds if they are perceived to be at a relatively higher likelihood to default on debt payments.

On the chart below, I have visualized the widening Indian credit spread since the beginning of this year. This is done by taking the difference between local 3-year AAA corporate bonds and the equivalent of sovereign notes. The spread is hovering around 260-basis points. Meanwhile global economic uncertainty is on the rise. As such, the Rupee may struggle in the coming weeks as the nation weighs easing social distancing rules.

How can central banks impact currencies? 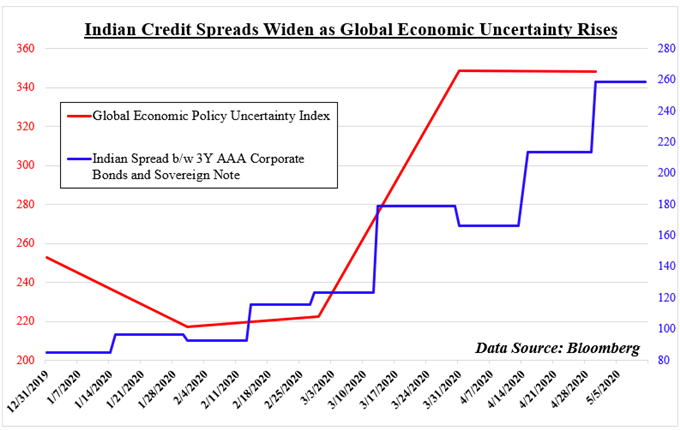 USD/INR continues to trade sideways since prices approached new highs in late March. A Rising Wedge bearish chart pattern and negative RSI divergence preceded the pair topping just under 77. Downside follow-through has since been lacking. Resuming losses entails taking out 74.94 which would expose former peaks from 2018. Otherwise, uptrend resumption may have USD/INR surpassing 77.00.