In every major crisis there comes a point at which weakening economic numbers translate into corporate scalps and the nodal Singapore energy market has reached that point. Its biggest oil trading firm Hin Leong Trading has filed for bankruptcy protection, seeking to restructure nearly $4 billion in debt.

If course, the energy sector has taken an unprecedent hit. The coronavirus has shredded energy-demand forecasts even as major producers saturate the market with cheap oil. Oil prices have collapsed to lows not seen since 2001, even after major production cuts which have so far done nothing to revive it. 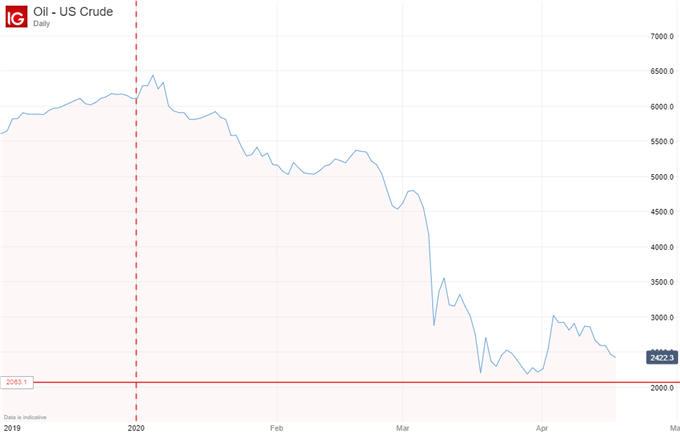 As ever contagion is on market minds.

Focus now shifts to Hin Leong’s many lenders. The Straits Times reports that HSBC is the biggest, on $600 million while three major Singapore banks (UOB, OCBC and DBS) have a combined $600 million. The Monetary Authority of Singapore has reportedly been in touch with all relevant banks and markets seem content that the company has run into trouble because of difficulties specific to it, and that its troubles won’t morph into a broader regional contagion.

However, the travails of such a huge and long-lived part of the Singapore energy market will do little for battered risk appetite, with nervous eyes likely cast over the entire energy complex as crude oil prices continue to slide. US crude futures plunged 6% on Monday as Asian trade got under way.

The flood of cheap oil unleashed by the Saudi/Russian price war that smashed prices in March will take time to work its way out into a market depressed by muted demand even though a truce has been called. With all major economies still under some form of lockdown, the markets will be on watch for any other Hin Leong’s which may be out there, along with their lenders and operational partners.

All up, the strong underlying bid for haven assets such as US Treasuries, the Swiss Franc, Japanese Yen and gold is unlikely to face a meaningful hit even though riskier assets have done better in April.