What Does Trader Positioning Say About Global Stock Market Trends?

Global equities have extended their bounce off last month’s low as investors continued broadly selling into their uptrends. These indexes include the Dow Jones, DAX 30 and CAC 40. Now, overall net-short positioning seems to be sitting at levels prior to the outbreak of the coronavirus. What can this mean for the outlook ahead? I discuss it in this week’s session on IG Client Sentiment (IGCS) – see recording above.

According to IGCS, about 27.67 percent of traders are net long the Dow Jones at the time of this writing. That is down from about a 65% upside bias when prices bottomed in March. Since then, the Dow climbed over 30 percent as traders attempted to pick the next top. From here, the combination of current sentiment and recent changes offers a stronger bullish contrarian trading bias in the index. 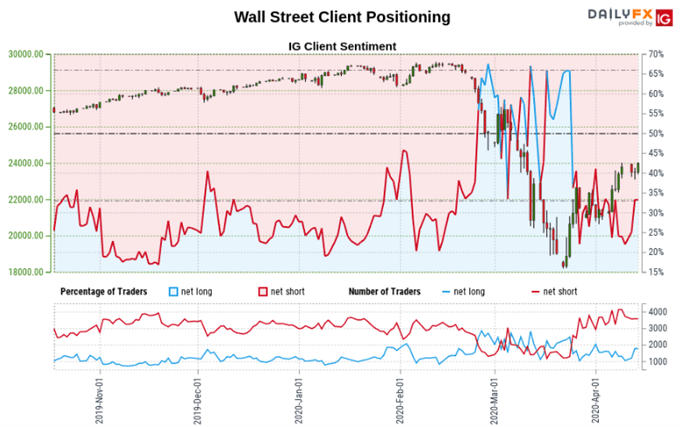 Despite the bullish outlook via trader positioning signals, negative RSI divergence persists in Dow Jones futures on the 4-hour chart below. That is a sign of fading momentum as the index approaches former rising support from 2016 and resistance at 24675. In the event of a turn lower, rising support from late March – green line – could maintain the near term uptrend.

IGCS shows about 33.14% of DAX 30 traders are net long which is down from roughly 65% upside bias in March. Since then, the German benchmark stock index climbed over 31 percent as more investors sold into the uptrend. The combination of current sentiment and recent changes produces further mixed DAX 30 trading bias. Those net long are 22.59% higher than yesterday while net short bets are up 13.32% in the same period. 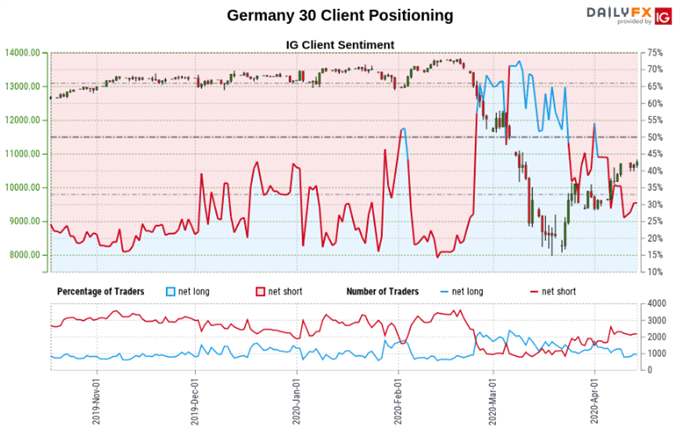 The DAX 30 broke above an Ascending Triangle chart formation. This is a continuation pattern whereby the push higher could extend the bounce off last month’s bottom. That could place the index pushing into key resistance which is a range between 100997 to 11441. Climbing above this range exposes 12275. A turn lower places the focus on rising support from March – red line below.

About 36.60% of CAC 40 traders are net long according to IGCS at the time of publishing. This is down from about a 65% upside bias when the index bottom last month. Since then, traders have been cautiously selling into the bounce as they attempted to pick the next top. From here, the combination of current sentiment and recent changes offers a stronger CAC 40 bullish contrarian trading bias. 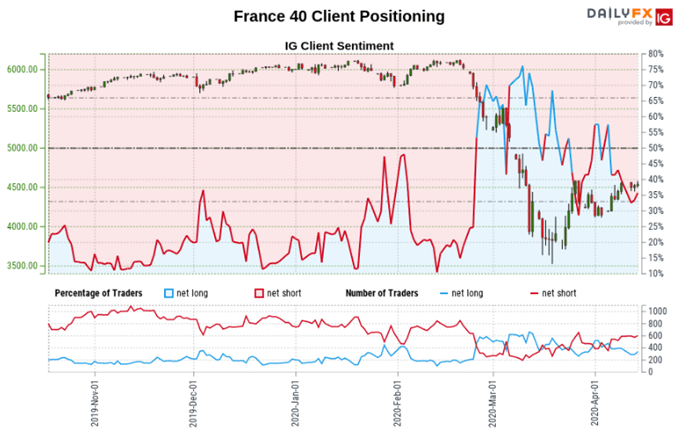 The CAC 40 has also been trading within an Ascending Triangle. Prices are still confined within the chart pattern as resistance holds at 4552. Negative RSI divergence persists which shows fading upside momentum. A turn lower places the focus on rising support from March which is also the floor of the triangle. Further gains on the other hand exposes former rising support from 2011.