Swiss Franc, US Dollar, Yen May Rise on Fear of Maket Closures

Anti-risk haven assets like the Japanese Yen, Swiss Franc, gold and government bonds hardly needed another source of support but may have found one in rising levels of chatter that markets might be closed as part of the global coronavirus response, even if the prospect of action must be small.

The Wall Street Journal reported this week that a two-week stock market closure was one measure proposed to Bank of England Governor Andrew Bailey on Monday by prominent but unnamed London fund managers.

This desire may well be understandable. Risk appetite is under severe pressure and it’s hardly surprising that on any given day many succumb to the urge to cash out, doubtless to the annoyance and inconvenience of those managers.

With hundreds of billions of dollars-worth of liquidity primed to support markets, you don’t have to look far to find those who think the bounce-back, when it comes, will be sharp. Those same managers want to be ready for it with as much ammunition to deploy as possible.

However, while market closures in response to certain massive risk events are relatively common, a two-week closure would be the sort of length only previously eclipsed by world war.

The New York Stock Exchange closed from July 31 to November 27, 1914 as what we now know as World War I began. However, seismic events such as the 9/11 terror attack and Hurricanes Gloria and Sandy (in 1985 and 2012 respectively) saw closures measured only in days.

Moreover, there’s an obvious problem with a coronavirus-related closure: no one can say how long it would have to be to do any good. If there were certainty that the contagion could be defeated in two weeks, or a month, then perhaps the closure of markets for that period might make sense. But at present any hiatus would logically need to be open ended to achieve the desired affect of relative market stability.

Such a shutdown would strike at the roots of the very system its supposedly designed to protect, denying investors the right to freely buy and sell assets at the market price.

Moreover, a two-week closure of, say the London Stock Exchange, while other major bourses remained open, might only serve to damage the city’s reputation as a financial hub and that in a post-Brexit phase in which it needs all the burnishing it can get. And there’s little sign of a co-ordinated move. The US Administration’s current stated aim is to keep markets open.

All up then it’s not so much the probability of a London market closure that worries investors, but rather the fact of being in a time when such things can be openly discussed.

Even the rising probability could prompt investors to abandon riskier markets altogether in favour of the liquid, counter-risk assets they’re already largely disposed to favor.

The Swiss Franc is another eye-catching currency market exemplar of this trend, with EUR/CHF already down to lows not previously seen since the summer of 2015. 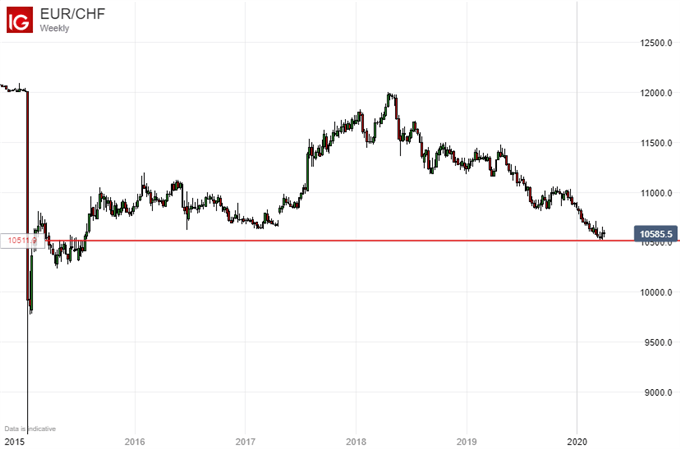 Even the perception that a prolonged market closure might be possible is likely to accelerate flow into this and other similar-profile assets, like the US Dollar or the Japanese Yen.