US Dollar May Resume Rise Amid Global Recession Fears

Global growth swooned in February. PMI data from JPMorgan and Markit Economics suggests that worldwide manufacturing- and service-sector activity shrank at the fastest pace since mid-2009, the heart of the global recession following the 2008 financial crisis at the onset of the COVID-19 outbreak.

The situation looks to have deteriorated further in March. PMIs tracking activity in the Eurozone and the US reveal eyewatering weakness. The single currency bloc posted its worst reading since at least 1998, which is as far back as records go. The US also posted record-setting weakness, dating back to October 2009.

There seems to be sufficient evidence here to make a compelling case for global recession, surprising strength in Chinese PMI figures notwithstanding. While central banks and governments have rapidly deployed colossal stimulus measures, their potency is likely to be limited until the virus is on the defensive.

Securing a peak in the outbreak and reducing new infections look like pre-requisites on this front. Indeed, deploying ultra-cheap credit and subsidized purchasing power to revive economic activity will be devilishly difficult unless the masses now sidelined by containment efforts are released from lockdown.

The latest incidence data suggests this remains elusive. The number of total cases continues to soar at breakneck pace, suggesting that engagement with the economy will remain frustratingly weak for some time yet. Indeed, the US has formally extended federal social distancing guidelines through April.

US DOLLAR MAY RESUME RISE AS GLOBAL RECESSION FEARS MULTIPLY

With this in mind, the rise across cycle-sensitive and sentiment-geared assets over the past week seems suspect. The rebound seems to have been triggered by the Fed’s move to make QE open-ended, capping a surge in US Dollar funding costs (tracked by the so-called TED spread, white line on the chart below).

Global stocks recovered alongside cycle-sensitive commodities like copper, crude oil prices stabilized despite a price war between Saudi Arabia and Russia, and the US Dollar fell as rabid demand for cash moderated. Nevertheless, the cost of USD liquidity remains near recent peaks. 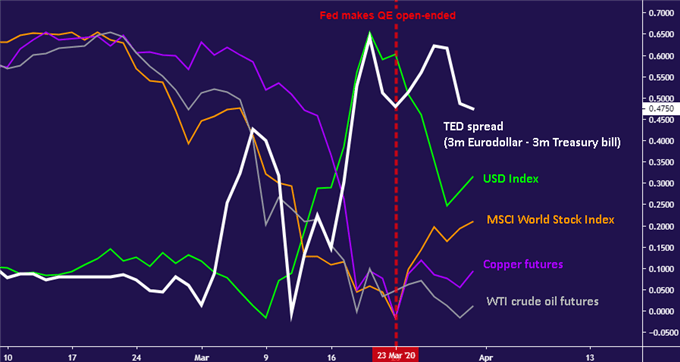 That the world’s most influential central bank – the steward of the undisputed global reserve currency which accounts for over 80 percent of global monetary transactions – has been unable to generate looser credit conditions is eye-catching. It reinforces the sense that the impact of stimulus is limited, at least for now.

In the meantime, the prospect of a deep and long-lasting economic downturn is understandably crimping credit access as would-be lenders shy away from deploying capital. This may see the premium on cash rebuild as markets move past digesting the Fed’s action, driving the Greenback higher anew.