WILL THE CORONAVIRUS CAUSE A RECESSION?

There is growing concern that the spread of the coronavirus will plunge the world into a recession as COVID-19 continues to destabilize global growth. In addition to frail fundamentals, corporate debt markets are also being squeezed with credit default swaps on sub-investment grade firms surging to their highest levels in five years. It is likely that as the virus spreads and dims the outlook, credit risks will also continue to rise.

For Europe, this came at a particularly vulnerable time – as discussed below – making the prospect of an inflationary recovery that much less likely (see chart). Later this week, a cascade of CPI data will be released out of Sweden which may paint a gloomy picture for Nordic price growth. This comes as Riksbank Deputy Governor Martin Floden is reported to have been infected with the coronavirus.

What COVID-19 has done is reveal underlying weaknesses in the financial system – like the multi trillion dollar leveraged loan market – that are now at risk of causing their own kind of contagion. Consequently, much like what was seen in 2008, the spillover from the financial sector may eventually bleed into the real economy. However, the difference between now and 10 years ago is central banks are not as well-equipped to tackle a downturn.

As outlined in my prior Nordic forecast: if “unity on the outlook and policy going forward is lacking” it could hurt crude oil prices and the Norwegian Krone. Over the weekend, Saudi Arabia and Russia failed to reach an agreement on extending output cuts meant to boost crude oil prices as the coronavirus chips away at demand. In response, the Brent oil benchmark shed over 30 percent at the start of the week. 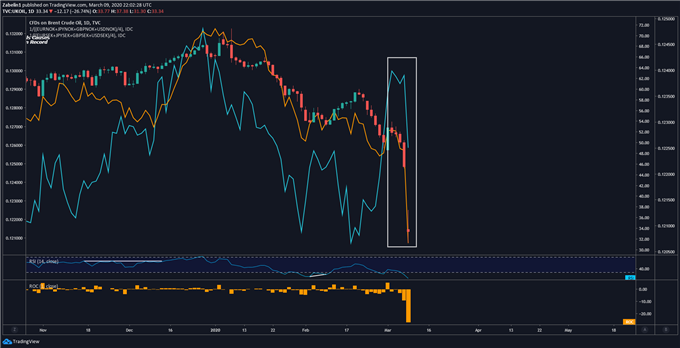 Saudi Arabia slashed its oil prices and is now looking to ramp up production, but it is unclear how long it will be able to sell crude oil at $30 or less. According to the IMF, the fiscal breakeven price for Saudi Arabia is around $80 per barrel. Consequently, it then comes down to the question of who has the most reserves and capital to spare in order to endure producing at a cost-incurring level in order to outlast their competitor.

Regardless, the attrition will likely pressure the Swedish Krona and Norwegian Krone, but particularly the latter since the economy strongly relies on the petroleum industry. NOK’s decline may also be amplified by a deteriorating fundamental environment of slowing global growth, particularly out of its key biggest trading partner – Europe.

The sentiment-linked Swedish Krona and Norwegian Krone are at risk of further liquidation as the outlook for the European economy – the primary destination for Nordic exports – wilts. Italy, the third largest Eurozone economy, has announced that it is extending a nation-wide lockdown as a countermeasure to the spread of the coronavirus.

Next to China, Italy has the highest number of confirmed cases at 9,172 with France and Germany at 1,209 and 1,176, respectively. Weaker consumption and ailing sentiment mean economic activity in the Eurozone will likely be dampened, further undermining the prospect of a regional recovery. For the outward-facing Nordic economies, this will mean weaker exports and increased urgency for easing measures.

At the start of the week, USD/NOK gapped higher and proceeded to have the largest one-day spike since 2016 as it trades at a 35-year year high, surpassing the peak of where it was during the 2008 financial crisis. The pair may continue to climb against the backdrop of a fundamentally-unsound environment as the petroleum-linked Norwegian Krone faces aggressive selling pressure. 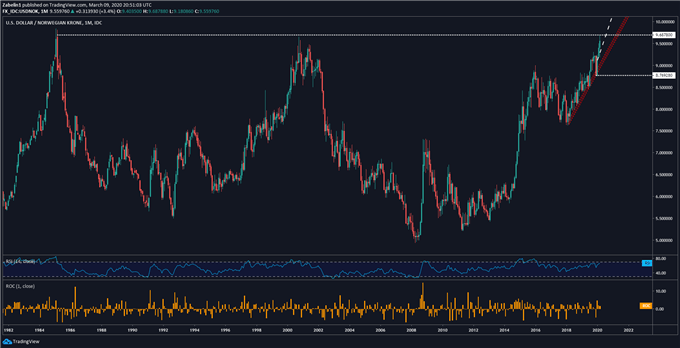 On the other hand, USD/SEK remained relatively unchanged as it trades around January-lows. The pair’s strange price action may have had to do with two factors: the decline in crude oil prices and the interest rate differential between the US Dollar and Swedish Krona. On the one hand, the decline in Brent was likely a drag on the petroleum-linked SEK which caused it to fall against the Greenback.

On the other hand, the interest rate attached to the US Dollar is comparatively higher than for the Swedish Krona who’s associated central bank – the Riksbank – only recently exited negative territory. In the case of easing, the USD has more room for a downside adjustment than the SEK. This dynamic may have acted as an opposing force to the downside pressure of an aggressive liquidation in petroleum-linked assets. 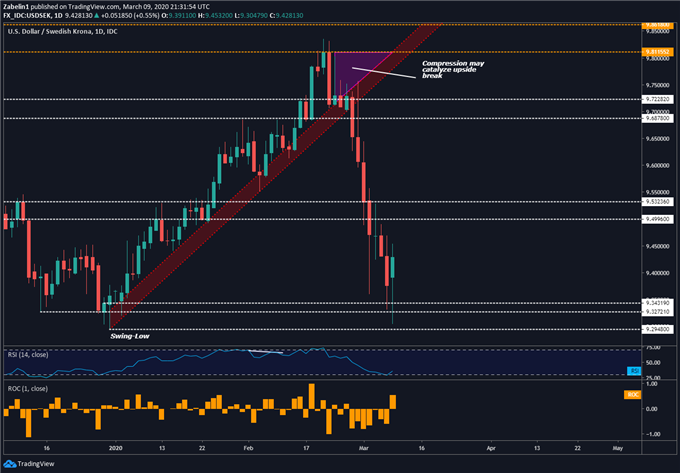