The haven-linked US Dollar broadly speaking underperformed this past week against its major counterparts. That weakness also extended to its ASEAN peers such as the Singapore Dollar, Indonesian Rupiah, Malaysian Ringgit and Philippine Peso. In other parts of Asia, the Greenback soared against the Indian Rupee as local banking woes further threatened the economic outlook. USD/MYR looked past a Bank of Malaysia rate cut. 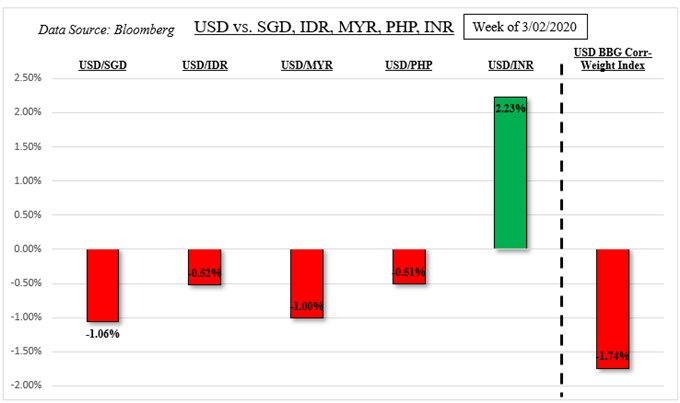 The US Dollar has generally been focusing on its deteriorating return, particularly after the Federal Reserve delivered an emergency 50-bp rate cut last week. This has resulted in aggressive declines in local government bond yields. In fact, the 10-year rate on local Treasuries dropped under 1.00% for the first time on record. What this can translate into for developing nations – including ASEAN – are favorable repaying conditions.

In the aftermath of the 2008 financial crisis, borrowing costs in the United States sharply dropped and fell to zero. After, emerging market economies generally increased borrowing to support local growth and finances. The drop in U.S. rates thus makes it relatively easier to repay foreign debt and more may be coming. Fed funds futures indicate that 2 rate cuts later this month are fully priced in with odds of a third greater than 50%.

What this has led to are tumbling bond yield spreads between United States and ASEAN nations. On the chart below, I have outlined the difference in US, Singaporean, Indonesian and Malaysian 10-year government bond yields. My ASEAN-based US Dollar index – which averages it versus SGD, IDR, MYR and PHP – has been closely following the deterioration in bond yield spreads and may continue so in the short term. 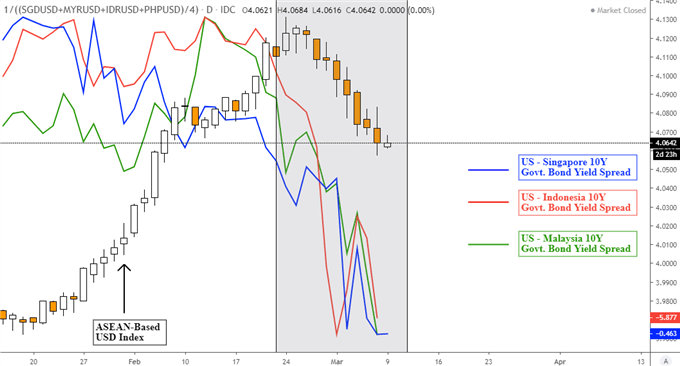 The week ahead has a relatively lighter economic docket, both from ASEAN nations and the United States. Highlights include January’s Philippine trade balance, Malaysian and Indian industrial production. Across the Pacific Ocean, U.S. CPI data is on tap for February. Markets may pay closer attention to the University of Michigan Sentiment data on Friday which is expected to drop to its lowest since September 2019.

The delay in the impact of the coronavirus on U.S. data was made apparent last week. Markets largely brushed off a blowout in February’s non-farm payrolls report which has yet to capture the shock of the spreading virus. With monetary policy having only so much room to react in an era of low interest rates, the focus for supporting growth arguably turns to fiscal stimulus.

The $7.8b package passed last week by Congress and the White House has yet to translate into a “risk-on” tone in markets. According to White House Economic Adviser Larry Kudlow, tariff policy changes amid the Wuhan virus outbreak are “not on the table now”. As a reminder, before the coronavirus, global growth had already been slowing on the trade war. A temporary lifting of tariffs could help boost market confidence.

That may translate into some strength in the US Dollar if further fiscal support dampens the needs for what little room there is left to loosen monetary policy. Otherwise, local bond yields may continue their plunge, offering some downward pressures in USD/SGD, USD/IDR, USD/MYR and USD/PHP. The upside potential still remains that the US Dollar, as the world’s reserve currency, sees a sudden surge in haven demand.