Asia Pacific stock markets only had one way to go Friday in the wake of the Dow Jones Industrial Average’s record one-day drop in the previous US session, as fears of a potentially massive economic hit from the spread of coronavirus send forecasters back to the drawing board to rethink their 2020 calls.

US President Donald Trump appeared before the press late Wednesday in the US, with a bevy of medical experts, to outline the administration’s response to the outbreak. However, this seems signally to have failed in reassuring investors, and the always-suspect prognosis that the US economy might remain largely immune to the contagion’s effects has now been comprehensively abandoned.

Markets now weigh the chances of a broad global recession triggered by the outbreak. Credit rating agency Moody’s was reportedly the latest heavyweight house to give its view, reportedly labelling such a slowdown as likely should the disease reach pandemic status worldwide.

Stock markets look set for their worst week since the days of the financial crisis in 2008, and it’s very difficult to see a lasting bounce for investor risk appetite for as long as the coronavirus story dominates headlines.

With all of the above in mind, it’s no surprise that growth-correlated assets from stock markets through energy to currencies took a hit in Asia. Many of them had already of course been hammered by virus-related worries given their proximity to China, their trading links with it, or both.

The ASX 200 is now back down to lows not seen since August 2019 having endured eight straight days of precipitous falls and a loss of 750 points. 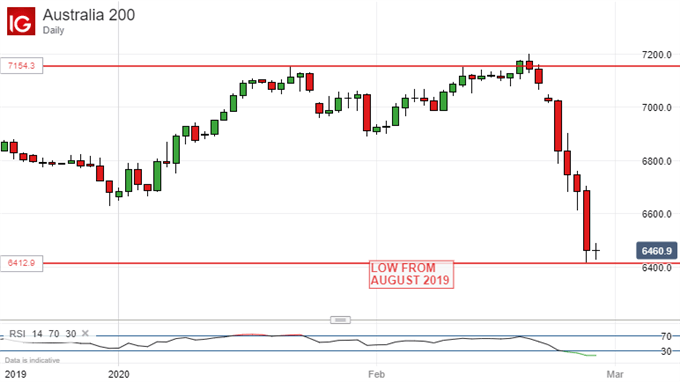 The index is replete with China linked plays given Australia’s huge raw material exports to the world’s number two economy, but similar falls can be seen across the region from Japan to North Korea.

Currency markets have reacted a little differently as the markets move to expect deeper interest rate cuts from the US Federal Reserve in response to the crisis. With three quarter-percentage-point reductions now almost priced-in to US futures curves, the Dollar is faring notably less well against currencies whose own base rates are judged able to go no lower. The Euro and the Japanese Yen figure here, the contention being that interest rate differentials can effectively only move in their favour as US borrowing costs fall.

The likes of the Australian and New Zealand Dollars, meanwhile, have done rather worse as their own rates do clearly have room to go lower, albeit from record lows. This in turn offers the prospect that those differentials can be maintained, stabilizing relative value.

It’s important to remember, however, that both currencies have already been crushed this year by the virus-related reduction in risk appetite, with the Australian Dollar close to eleven-year lows against the greenback. 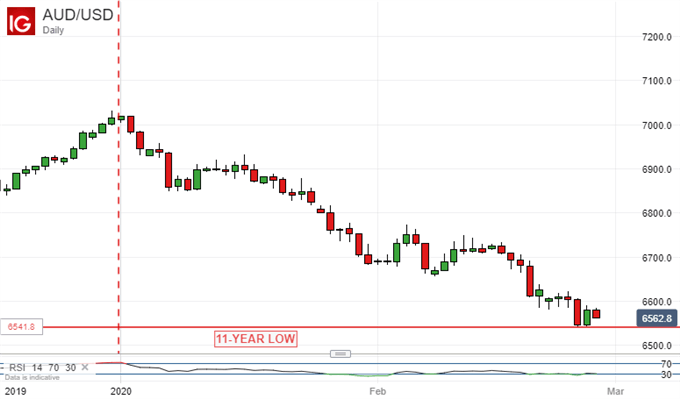 It may be the case that markets got well ahead of themselves toward the end of 2019 and had risen too sharply on things like the inking of a phase one trade deal between China and the US, and the breaking of Britain’s electoral Brexit deadlock.

It’s possible that a risk rethink would have set in by now in any case, but the viral outbreak has forced a much deeper and possibly much more lasting one on investors. It’s highly unlikely that countercyclical assets such as gold, bonds, the Swiss Franc and the Japanese Yen are going to lose their appeal anytime soon.