The US Dollar, which has been rallying up a storm against ASEAN currencies, may have more room to make rise against the Malaysian Ringgit and push USD/MYR to the upside. This follows the abrupt resignation of Prime Minister Mahathir Mohamad on Monday, throwing Malaysia into a clout of near-term political uncertainty. This tends to increase the risk premium for investing in a country and inducing market volatility.

As a result, the FTSE Bursa Malaysia KLCI index – a composite of major local public companies – has ended a record-breaking bull streak that lasted 12 years. Including the downside gap on Monday, the KLCI declined about 2.7 percent from last week’s close as concerns on the coronavirus rose. The index is now about 21% lower from the 2017 peak, greater than the -20% threshold for the typical definition of a bear market.

Yet from a long-term technical perspective, I would argue that the dominant uptrend may still be intact. Using the monthly chart below, I have identified a potential rising channel that has its inception from the end of the Asia Financial Crisis – blue area. The medium-term downtrend is being maintained by falling resistance from the beginning of 2017. The KLCI is running out of room to consolidate between these psychological barriers. 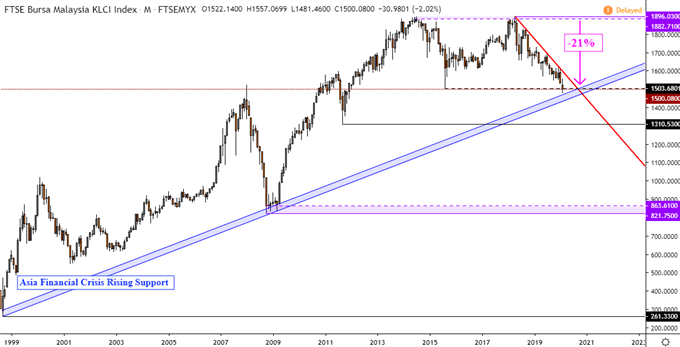 Mahathir Mohamad resigned after his Malaysian United Indigenous Party – also known as Parti Pribumi Bersatu - left the ruling coalition. Lim Guan Eng, the Minister of Finance, said that Mahathir stepped down due to refusing to cooperate with the opposition party. His supporters had been reportedly attempting to create a new government that excludes Anwar Ibrahim, who was destined to succeed the Prime Minister.

This has thrown hopes of fiscal stimulus into a shroud of uncertainty. Mahathir Mohamad was due to unveil an economic package on February 27 to help stem the impact of the coronavirus outbreak. Malaysia’s economy grew just 3.6% y/y in the fourth quarter versus 4.1% expected. That was the softest pace of expansion since 2009 and has been following lower inflation, exports and business confidence since 2017 – see chart.

The Bank of Malaysia may have to step up to help alleviate external pressures, perhaps weakening the Ringgit. According to the World Bank, exports accounted for about 69% of GDP in 2018 with imports hovering near 62%. Combining these yield a 7% addition to GDP (in addition to consumption, investment and government spending). A decline in trade activity is almost but inevitable with China grappling with the Wuhan virus. 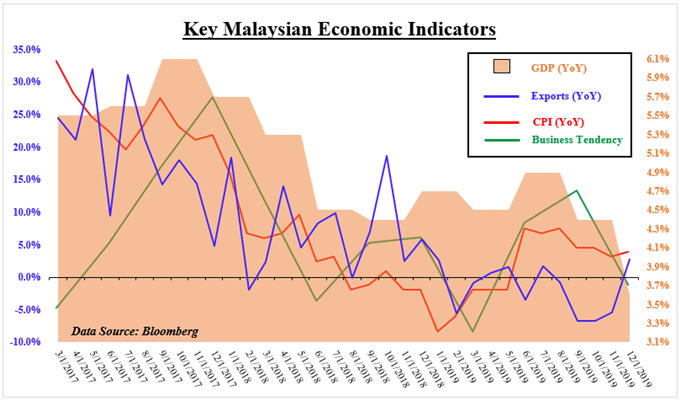 From a technical standpoint, the Malaysian Ringgit could be on the verge of taking out its weakest point against the US Dollar since August. On the weekly chart, if USD/MYR closes above 4.2270 that would expose the October 2017 high. Should the US Dollar advance beyond that point, that may see the currency pair aim towards the psychological barrier between 4.2935 and 4.3085. Broadly speaking, USD/MYR has been in much of a consolidation mode since late 2018 with support between 4.050 to 4.0620. 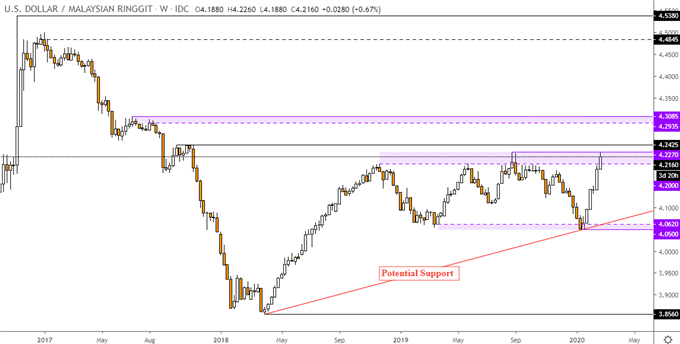 What Does a Forex Spread Tell Traders?