The US Dollar soared against its major counterparts this past week, and its strength mostly extended into some of its ASEAN counterparts. The Singapore Dollar was particularly battered despite fears around the coronavirus somewhat subsiding. USD/SGD soared as the Monetary Authority of Singapore hinted a more-dovish tilt ahead of the April policy announcement. The Malaysian Ringgit also underperformed.

With its country’s relatively smaller exposure to Chinese tourism, the Philippine Peso held its ground. Though it succumbed to cautious weakness after the Philippine Central Bank cut rates by 25-bp and signaled further easing by perhaps the middle of this year. Rising local bond yields also aided the US Dollar as the markets slightly cooled dovish expectations. 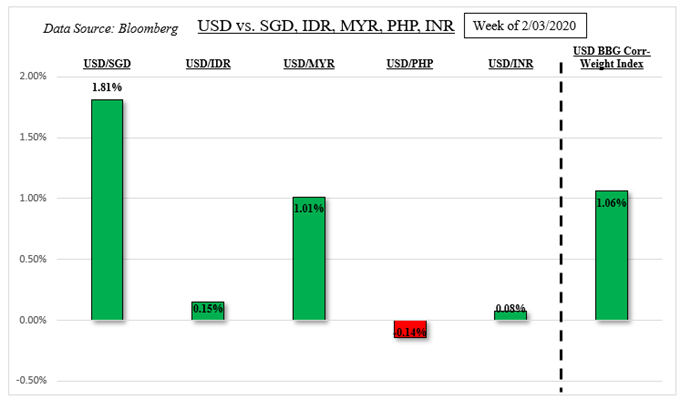 A resurgence in concerns around the Wuhan virus resulted in a “risk-off” tone that echoed into the MSCI Emerging Markets Index (EEM) on Friday. Weakness in the latter is often associated with broad gains in my ASEAN-based US Dollar index. The Fed warned that the outbreak posed a “new risk” to the economy. This is as Toyota and Honda, prominent Japanese carmakers, temporarily paused operations in China.

Chinese trade data was also delayed and is expected to be combined with February’s statistics. On Friday, China reported that total confirmed cases of the coronavirus climbed to 31,744 with deaths totaling 722. The momentum continued over the weekend, with total fatalities surpassing those of the SARS outbreak in 2003. Fears may continue weighing on SGD and MYR, especially if capital flight accelerates.

Sentiment will thus likely remain the key focus for USD/SGD, USD/MYR, USD/IDR and USD/PHP in the week ahead. China’s economy is expected to slow, though this does not appear to be impacting trade goals between the world’s largest economies. China’s President Xi Jinping reassured his U.S. counterpart, Donald Trump, that the country will go on with purchasing exports and to meet targets outlined in their trade deal.

Regional ASEAN event risk include Philippine trade data, but that will be for the December period and the markets may scrutinize January’s figures more. USD/PHP may also keep an eye on Philippine fourth-quarter GDP data due on Wednesday. Growth is expected to slow to 4.1% y/y from Q3. Such an outcome would be the weakest pace since 2016.

Risks for market mood are also emanating from the United States. On the chart below, the Fed’s balance sheet is losing upside momentum and poises downside potential for Wall Street. Fed Chair Jerome Powell will be testifying to Congress and may reveal further details into their repurchasing operations. The haven-linked US Dollar may thus rise if he commits to slowly unwinding the pace of repo purchases. 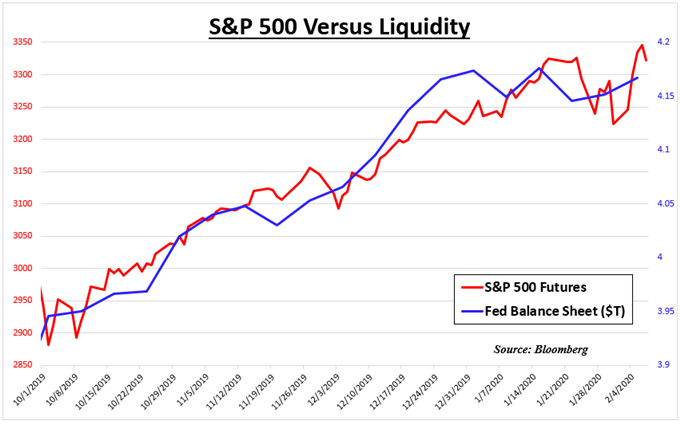