While crude oil prices continue to rise, US natural gas producers have seen prices plunge to lows they’ve not seen since early 2016.

In markets overwhelmingly driven by large, global themes be they US-China trade,Brexit or Middle Eastern geopolitics, it’s always tempting to see big picture stories in large, global terms. If one energy market looks is priced optimistically for growth while another tanks, surely one of them has to be wrong, right?

Well, sometimes. But in this case it might be rash to draw any such conclusion and wiser to let the story remind us that market specific stories can still outweigh even the risk-impulse which has so often driven all markets since the financial crisis. 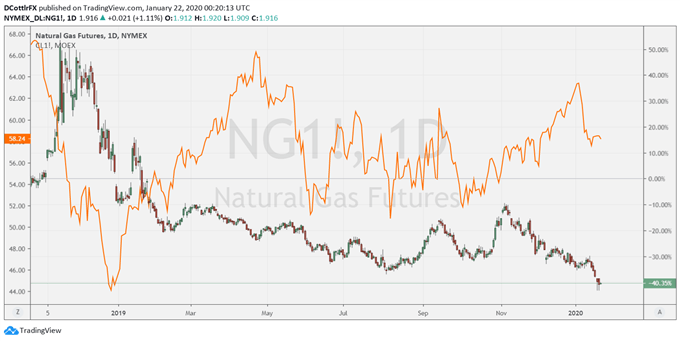 Crude oil prices are underpinned fundamentally by the prospect that supply will remain tight, thanks to output reductions from the Organization of Petroleum Exporting Countries (OPEC), Russia et al. It will do so at a time when demand for energy could rise as recovering major economies benefit from low interest rates and, possibly, more fiscal stimulus.

Natural gas prices on the other hand are in a bind. Futures prices fell below $2 per million British thermal units for the first time in nearly four years this week. Warmer weather forecasts for the US this year have clobbered the market -despite an obviously cold winter- as demand for heating energy is expected to be far below normal in the months ahead. In any case excess gas production in the Permian Basin has seen supplies surge for years. The frackers are happy to sell gas by-product at prices well below what more traditional producers would like. That surge is predicted to last, too. The US Energy Information Administration predicts that gas production will rise by 3% this year.

It is possible that this excess gas, of which there’s plenty, could be exported, However the economics of gas shipping make this difficult to do at short notice on the suppliers’ terms. In any case, Chinese tariffs still apply to US gas, and the likes of Australia have happily stepped in. Chinese growth is in any case skirting thirty-year lows.

It’s likely that the US natural gas market will likely have to get used to lower prices for some time yet, whatever happens in other energy markets and in the broader global economy. The process will be painful, as shareholders in the gas companies already know. Pittsburgh’s EQT Corp is the country’s largest producer and its stock is down more than 60% compared to this time last year.