The US Dollar generally had a solid week, rising against its major counterparts such as the Euro and Japanese Yen. Where it fell further behind was against some of its ASEAN counterparts. The Singapore Dollar, Indonesian Rupiah and Malaysian Ringgit aimed higher. USD/IDR thus touched its lowest point since February 2018. The Philippine Peso on the other hand cautiously weakened.

Gains in SGD, IDR and MYR could be traced to improving market mood around the US-China “phase one” trade deal – as expected. The MSCI Emerging Markets Index (EEM) climbed about 1.4% over the past 5 trading days as the S&P 500 hit record highs. ASEAN currencies tend to have a very close relationship with sentiment. These currencies are more sensitive to capital flows which have been pouring into the region lately. 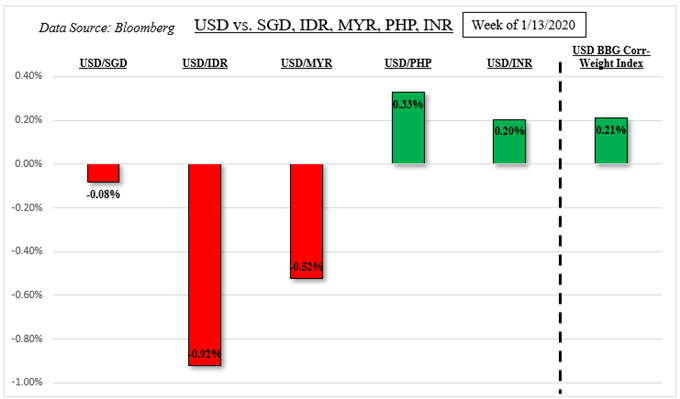 The week ahead is loaded with both local and external economic event risk. One of the most interesting could be the Bank of Indonesia monetary policy announcement on Thursday. USD/IDR has been on an aggressive decline, particularly after the central bank welcomed further appreciation in the Rupiah. There was a contrasting tone last week however from President Joko Widodo, often known as Jokowi.

He cautioned about too quick appreciation in the IDR, which could hurt exports. Jokowi is also pushing a bill through Parliament that aims to deliver corporate tax cuts and labor reform. This is to help further promote foreign capital inflows. What this could mean for the central bank is a decreased urgency to deliver on further rate cuts, potentially sending IDR rallying further.

The Malaysian Ringgit has monetary policy and inflation to watch on Wednesday. The Bank of Malaysia is expected to leave benchmark lending rates unchanged at 3.00%. It will be key to watch how policymakers react to recent developments on the US-China trade deal. Local CPI is also anticipated to rise 1.1% y/y in December, up from 0.9% in November. Expect potentially higher levels of USD/MYR volatility.

On the external front, all eyes will be on the World Economic Outlook from the International Monetary Fund on Monday. It will likely offer updates that take into account progress in trade talks. It will be released during the World Economic Forum in Davos, Switzerland. An upbeat tone that induces a “risk-on” tone could add momentum to gains in ASEAN currencies.