Australia’s benchmark ASX 200 equity index soared to record highs after China and the US signed their interim, ‘phase-one’ trade deal.

The index powered over the 7000 level for the first time ever and looks quite comfortable at that dizzy height, having added another 50 points or so since.

Japan’s Nikkei 225 on the other hand took the trade-deal news with rather less excitement. For sure it remains close to 15-month highs, and there certainly seems little impetus to cash out. But the index treated the signing as a bit of a snooze nonetheless, putting in modest gains which have already been largely retraced. 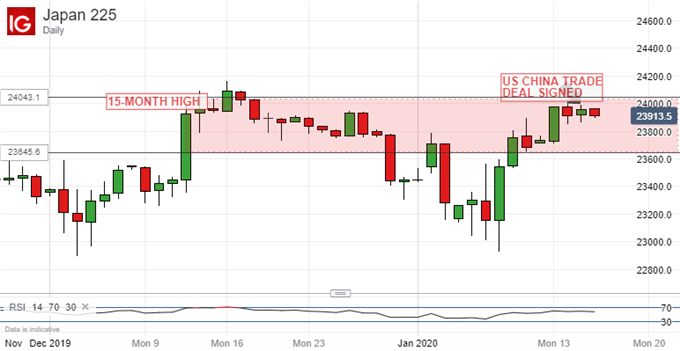 Obviously there’s no particular reason why major indexes ought to react similarly to the news. But more or less all of them rose last year in anticipation of a deal, so the difference in response to the fact of it demands attention.

Australia often finds itself cast in the role of liquid proxy for the Chinese economy. This makes sense as its major export tie with China takes the form of vast raw material exports. That hard wires it into Chinese growth for the very simple reason that a more quickly growing China will require more commodities.

However, Japan is in fact a more significant trading partner for China with perhaps only the United States more important. Japan’s trade with China lacks the single major sector which dominates Australia but, all the same, mere links to China clearly don’t explain the outperformance of the ASX. It may simply be that the well-flagged agreement with its focus entirely on US and Chinese trade was simply viewed as being sufficient to justify previous Nikkei gains but not enough to argue for more.

It may also be that the very narrow scope of the deal suits corporate Australia very well. It has done extremely well in exporting to China in the past year, with overall export values likely to have been at record highs. If the trade war hurt Australia at all it won’t be obvious in those figures.

Moreover, some of the US-China tariff war went very much Australia’s way. China raised trade barriers against US Liquified Natural Gas, for example, with Australia’s industry stepping in to replace US supply.

Counterintuitive as it may seem, the very underwhelming narrowness of the deal may work in Australia Inc.’s favor.

The markets are now hunkered down to await what progress may come on a more substantive, phase-two deal. This is likely to be a very long road, but on the basis of what we have seen so far, its travelling is likely to reward selective stock index investment rather than any blanket approach