The Japanese Yen has surged against the US Dollar as 2020 takes off, even as its local Nikkei 225 stock index has wilted.

The two assets have seen very different investor responses to the collapse in risk appetite which has inevitably accompanied the US killing of key Iranian General Qasem Suleimani and Iran’s military response.

The Japanese Yen is of course known as the foreign exchange market’s classic counter-cyclical ‘haven’ play, but what does that actually mean? Well, investors cannot hope for much return in many risk-free Japanese assets. The key short-term interest rate at the Bank of Japan has been minus0.1% for more than three years.

So Japanese investors can’t be blamed for seeking better returns overseas, or for repatriating their holdings when the world darkens. But other foreign exchange actors use the Yen’s cheapness to their advantage, borrowing in it at next to no cost to invest in better yielding currencies and assets. Some of this money is quite ‘hot’ and also apt to return to Japan when the going gets tough. A combination of these impulses is what we see at present, which is why the Yen has made notable gains, taking USD/JPY well below its previously dominant uptrend. 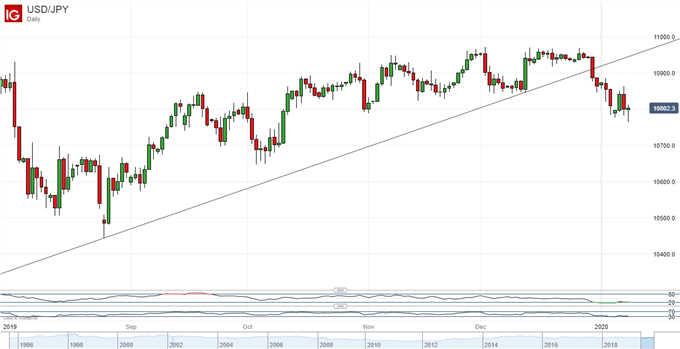 But what of Japanese stocks? Well, the Nikkei 225 is, unlike the Yen, no more immune than any other global index to the ‘risk off’ impulse. Stocks had been fairly resilient into year end. US corporate profits appeared to have held up quite well and investors looked with hope to the chances of better US-China trade relations, and also to progress on Brexit. The UK’s withdrawal form the European Union had been deadlocked in Parliament but has at least been sprung from jail by December’s general election.

However, that resilience has been severely tested by events in Iran and Iraq, with the Nikkei now wilting below its previous uptrend too. 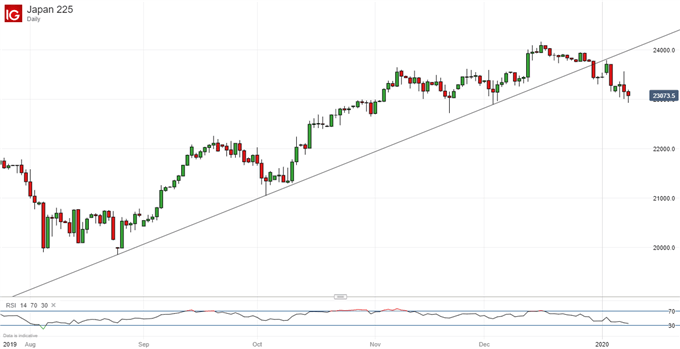 The Nikkei is likely to remain under pressure for as long as the threat of all-out conflict between Iran, the US and their allies remains heightened, with the Japanese Yen in demand.

However, it is worth keeping that resilience in mind should tensions cool. Foreign exchange investors srill have little reason beyond a flight to safety to stay very long of the Yen. The Nikkei 225 has ridden a Wall-Street led wave of equity optimism higher, but it’s worth noting that plenty of analysts are bullish on the index for its own sake. The likes of Nomura, Goldman Sachs and Morgan Stanley all tip more upside for the Nikkei this year.