Top 5 Most Market Moving Grey Swans to Watch for 2020

In trading circles, there is exceptional appeal in trading so-called ‘black swans’ – events that were wholly unpredictable, have a severe impact on the market and tend to be unreasonably rationalized after their occurrence. Such extremes will naturally drawl an inordinate amount of attention owing to the impact that they have. The snipe hunting that occurs among those overly ambitious traders boils down to the preternatural pursuit of volatility. The tales of entering a market at a high or low and just before activity levels are about to shift seem widespread. Such a story has no doubt had an impact on all of our excitement to one degree or another at some time in our participation in the market. And while black swans have stirred substantial moves – even reversals – in the past, predicting them is a fool’s errand of too many red herrings and false starts to be practical.

That public service announcement made, there are events for which an intense impact is still a possibility but for which their occurrence is at least a possible blip on the radar. They are still considered unlikely as that is where the market moving potential resides (otherwise markets would adjust to the inevitability). That is what I want focus on in this outlook for 2020. There are a number of different scenarios that could befall/grace our newswires and charts, but I want to focus in on events that combine a significant influence that also near the realm of probability. I will list 5 of the most remarkable events on my list, discuss the background, assess my probability of its occurring and identify a market I feel is most likely to reflect the development.

This is perhaps one of the most heavily debated consideration year in and year out: ‘will the markets finally collapse?’ The instrument you use to measure ‘the markets’ is important as looking at a thermometer won’t necessarily give you a good reading on whether an overinflated balloon is about to pop. However, I like to refer to the S&P 500 as my metric given its default enthusiasm this past decade. As one of the best performing benchmarks, if it is committed to a decline, the implications for the whole system are much clearer.

I have been a conscientious objector of the buy-and-hold view on markets since 2015. That does not mean I won’t position with a long-risk bias, rather I do not believe in the steadfastness of the climb and will not simply hold a long-term momentum position that aligns to ‘risk on’. The reason for this is the deviation from traditional scales of value like growth, returns or other standards. The market is happy to change its reasoning to suit – as the saying goes ‘ markets can remain irrational longer than you can solvent’ – but eventually the discrepancy will reach a breaking point. Since justification for greater exposure is adaptive, the turn on the ‘most hated bull market of all time’ will occur in sentiment rather through an event. Recognition of the stretch in speculative exposure, the discrepancy with ‘value’ and abundance of ready-made fundamental landmines makes this a higher probability in my view than what the market is affording despite the general belief of inevitability. 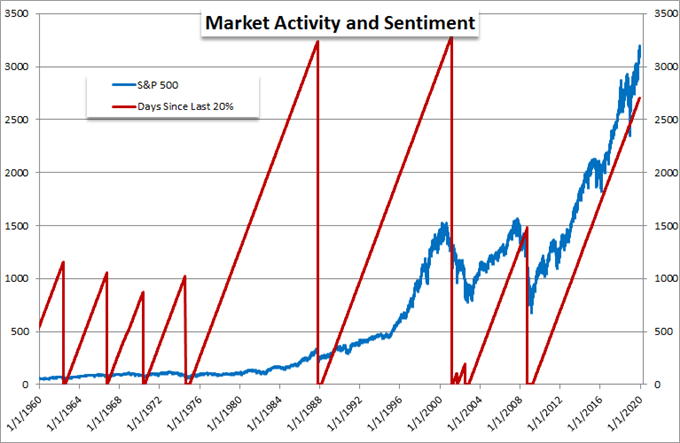 No Deal Brexit at End of Transition Period (50%)

After the December 12 general election in the United Kingdom, confidence flooded back into the British Pound. A uniform view of how the UK negotiation team will deal its EU counterpart revived confidence after years of impasse between the own nation’s Government and Parliament. Yet, the Sterling didn’t hold onto that climb long after the polls were in. That was owing to Prime Minister Johnson’s warning that he meant to push Europe to compromise by suggesting he may preclude any extensions on the transition period which is set to end at the very close of 2020 (December 31st, 2020).

To this point, much of the debate has been around the sudden cliff that comes with the inability to agree to the withdrawal. The previously established Withdrawal Agreement is likely to be implemented come January 31st (the deadline after the extension from October), but this is a question of the work to make replacement trade deals after the agreement to split. Most economists agree that it is very unlikely the two sides can work out an alternative environment in so short a time, which makes this a considerable risk. On the other hand, the event would come as less a sudden development given a clear deadline and plenty of debate beforehand. What’s more, the Pound is still historically low. Then again, it can always fall further. 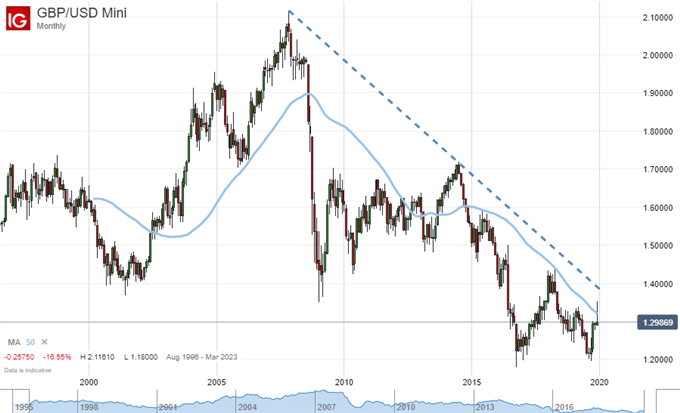 Markets generally do not reflect the typical favor or distaste for a politician that opinion polls reflect, but they abhor uncertainty and policy that upends growth in economy and the financial system. Heading into the 2016 Presidential election, Donald Trump was the agent of change given his atypical political approach and his uneven approach. That said, it was quite the surprise for me that the US equity market responded to the surprise election results with a steadfast rally through the subsequent year. That is certainly not the norm.

Moving into this new election, Trump is up for re-election and his policy stance is more transparent. His support for tax cut-driven growth was tested and fell short of a lasting lever for the US economy. Infrastructure spending which was a big part of his platform never garnered traction has not gained any tangible traction. In the meantime, trade wars aimed at rebalancing the global pace of growth has instead led to slower domestic and global growth. A re-election for the President would embolden his administration to push forward with the punitive trade policies that could push growth to stall speed.

Given the ongoing impeachment proceedings, it may seem that a second term is a low probability – following the opinion polls for quantitative measurement – but the bifurcation in American society that is mirrored so well in politics means extreme politicking is the norm with the struggle to find middle ground a potential lost cause. 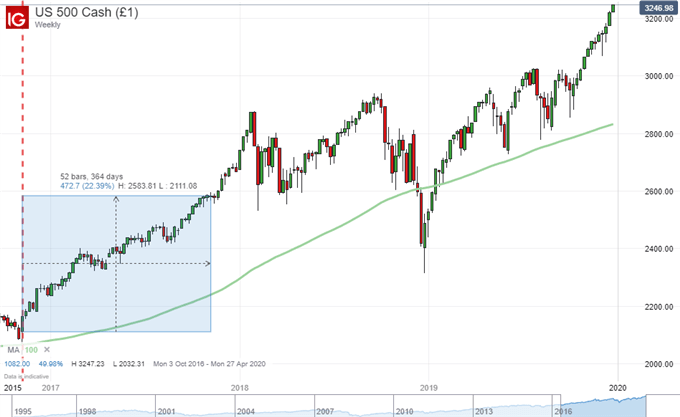 The US election will play a considerable role on future phases of the country’s involvement in trade wars. Since March 2018, the trade barriers with China have grown to enormous proportion. The two countries have imposed tariffs on over $450 billion in goods collectively. Further, blacklists were raised, blacklists were implemented and threats for further moves were warned. The first and only meaningful de-escalation took place this past month when both sides finally decided to verify intent to the ‘Phase One’ trade deal – though details were worryingly spare. Despite the number of times previous breakthroughs were waved off, it is somewhat surprising that the market took such an enthusiastic view of the outcome.

We have seen too many false dawns on this relationship front before. It would be reasonable to maintain a cautious view of these two countries’ ability to find a genuine compromise. However, there is strong motivation on both sides to speed up and perhaps capitulate. On the US side, the approach of the election and the unflattering pace of economic activity may find a useful lever – even if temporary – in progressively backing out of the economic grip from trade wars. For China, there are multiple fronts of uncertainty emerging while the effort to transition to a more open market-based economy (to spread out risk) is happening at the same time as a global struggle. Both sides have reason to find that middle ground.

If the US strikes an accord with its Chinese counterpart earlier in 2020, it is likely that the White House positions the outcome as a ‘win’ and attempt to double down on the populist fervor it attempts to ignite. That being the case, the next White Whale for the US would be Europe. The two are already two steps into a mild trade ware of their own. The US has slapped over $7 billion in tariffs on EU imports after the WTO’s ruling that Europe unfairly subsidized Airbus and the EU is anticipating an outcome for its own case sometime in January. Further, France slapped a digital tax on the largest tech companies (many being US) and the Trump administration responded with a plan of direct tariffs of its own. This could readily escalate with little warning and the economic implications of the world’s largest (developed) economies engaging would be far more disruptive. Some would prefer to watch risk trends or AUDUSD more directly for this, but I think USDCNH is the most appropriate outlet – in fact it is a top 2020 pick of mine. 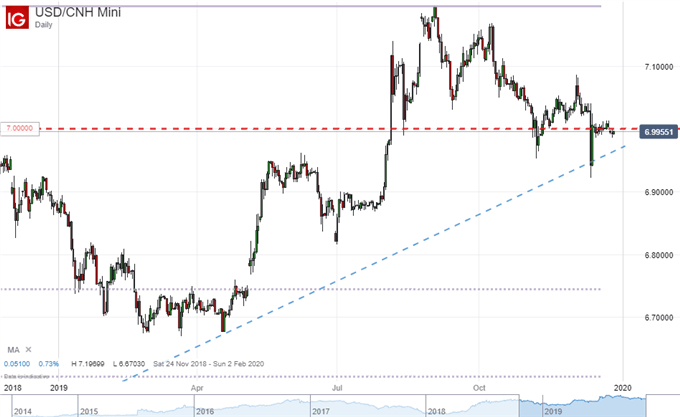 Finally, the more unorthodox and underappreciated grey swan in 2020 is a more systemic shift in monetary policy. It is no secret that the world’s largest central banks are failing to achieve the financial stability that they so desperately seek to inspire – and that isn’t even their stated mandate. Most of the major authorities are targeting inflation while some also have a more directly growth-linked objective like employment. Given how suppressed inflation pressures have been throughout the post-GFC (Great Financial Crisis) recovery and the lackluster sheen of economic performance, questions start to arise. Those concerns are born out of the knowledge that the world’s largest central banks have collectively cut rates to virtually zero and flooded the market with stimulus (QE and other such programs).

There is a problem when the technical goals are either reached by the central bank without the expected effect on the economy or worse, the ammunition is expended without ever reaching the state goal. What are the authorities to do? They don’t have many options. They can simply hope that the world’s economy simply grows out of its problems. They could continue to push the same policies and expect a different outcome. Or, they could change the stated goal. Regardless of the decision, a change of course is necessary.

Many would write this issue off as a ‘wonky’ matter that will not have clear practical influence on markets. However, I believe it could materially change the balance of risk in the system and many investors wouldn’t appreciate what it means for them until it is too late. For this market, I will be monitoring gold closely. Should sentiment and growth falter while the normal havens are undermined by a more ambiguous future, an alternative safe haven and general store of wealth becomes exceptionally important. 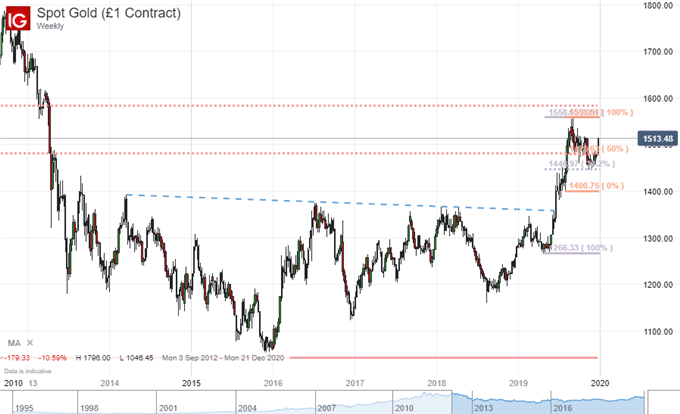