Recommended by Daniel Dubrovsky
What is the road ahead for the precious metal?
Get My Guide

Anti-fiat gold prices shot higher in thin trade on Tuesday, pushing XAU/USD for a bullish breakout on the daily chart. The yellow metal accelerated its ascent following the 5-year US government bond auction, see chart below. Strong demand depressed the yield down to 1.756 percent. This was much smaller than the 1.772% when-issued (WI) yield. It also did not hurt that the US Dollar was generally trading lower during Wall Street trade. With that in mind, does gold have further room to run in the near-term? 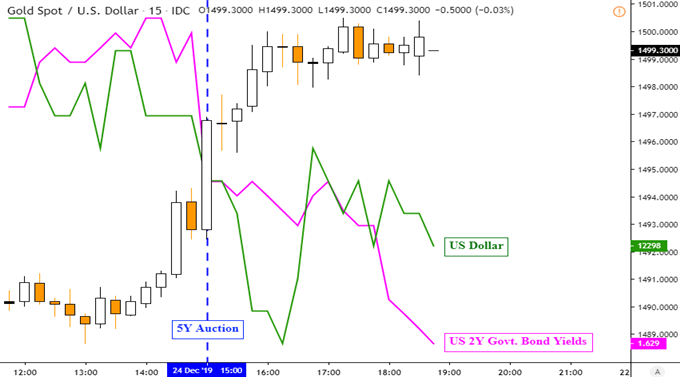 Taking a look at IG Client Sentiment, to get a perspective in the form of trader conviction, there may be a case to be had for further gains. Accompanying the over-three-percent rise since late November has been dwindling net long positioning. At the time of this writing, traders are more-or-less the least bullish the precious metal since the beginning of last month.

Retail trader data indicates that about 68.80 percent of participants are net long gold. If this value continues to decline ahead, indicating a rising amount of investors attempting to pick the top in the precious metal, it could have further room to rally. At the time of this writing however, the combination of current sentiment and recent changes gives us a further mixed trading bias. We typically take a contrarian view to crowd sentiment. 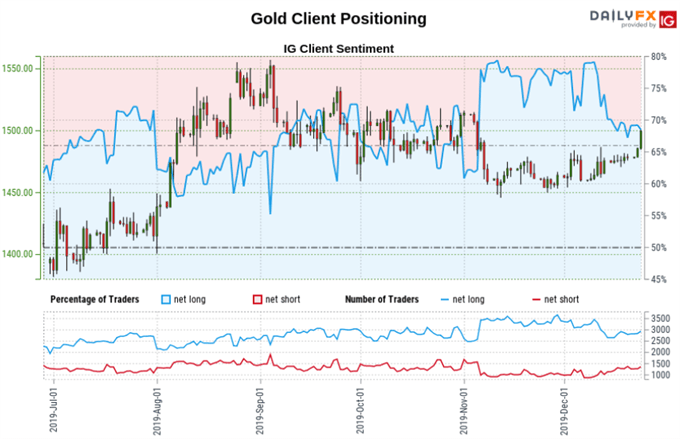 From a technical standpoint, gold has confirmed a break above a descending trend line from the beginning of September. This followed bullish signals I highlighted earlier this month via a Morning Star candlestick pattern. Prices appear to be aiming for the next psychological barrier between 1514 to 1519. A push above this area opens the door to revisiting what may likely end up as the 2019 high at 1557. Otherwise, a turn lower places the focus on support at 1480. 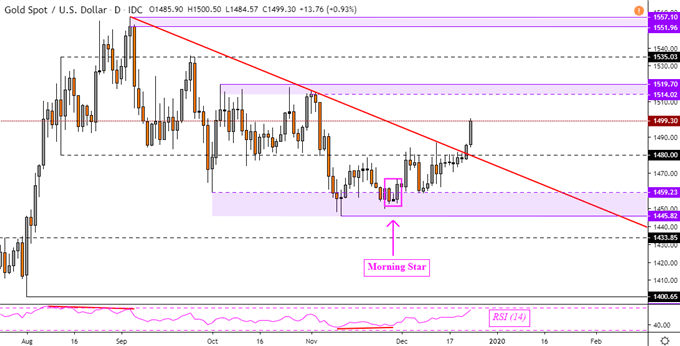