The Swiss Franc’s popularity problem looks set to haunt the Swiss National Bank well into 2020 and probably beyond.

Perhaps no other central bank exemplifies quite so well the doleful transition of that profession from the rock stars of the Alan Greenspan era to their post-crisis role as gloomy pickers of least-bad options.

The SNB’s festive choice is particularly stark. It can try to engineer a lower Franc, risk the currency-manipulation wrath of the US and hurt domestic savers. Or it can let the currency rise and throw both local exporters and any chance of inflation on the fire. Ho ho ho.

Why? Well in at atmosphere of trade tension, Brexit, Presidential impeachment and slowing global growth, investors can’t be blamed for wanting a lifeboat. The Swiss Franc is usually it. Even with some of the lowest interest rates in the world the currency has strengthened consistently against the Euro.

Don’t Bet on a New Floor

Of course, last time this happened the SNB took drastic action. In 2011 it stunned markets by putting all its mighty firepower behind the defense of a EUR/CHF floor. It said that any forays below EUR1.20 would be punished. And how. That resolve held until 2015 when the European Central Bank’s nuclear Quantitative Easing forced it to abandon the defense.

As I suggested earlier this year, those tactics’ days are probably over. A US Treasury report released in May put Switzerland as number twelve on a list of currency manipulators, even though it was removed from a list of urgently monitored countries. It won’t want to go back on.

However, that doesn’t mean it lacks options. SNB Chairman Thomas Jordan said in a newspaper interview this week that further interest rate cuts can’t be ruled out, even if they are not imminent. The SNB’s key policy rate has been steady at minus 0.75% for five years.

Of course, if rates that low for that long aren’t enough to scare away investors, it must be debatable whether any likely cuts would, especially if trade tensions between the US and EU worsen appreciably. They might. The chronic US trade deficit with Europe is increasingly in Washington’s sights with higher tariff barriers threatened.

But lower rates, or the threat of them, may be all the SNB has. On past evidence they won’t be very effective. The Swiss Franc is likely to remain terribly popular, at least until trade tensions ease. 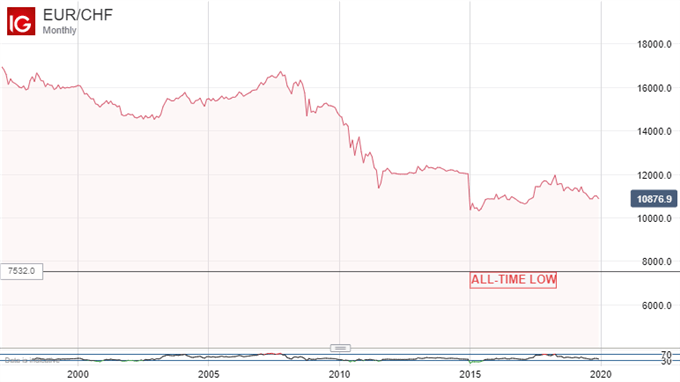