The US Dollar experienced its worst week against its major counterparts since the middle of October. Its weakness extended to some of its ASEAN peers as well. Towards the end of last week, a combination of better-than-expected local jobs data as well as US-China trade deal hopes helped fuel risk appetite. The former offered a boost to USD, helping to trim losses at the conclusion of the first week of December.

As anticipated, the focus for the Singapore Dollar, Indonesian Rupiah, Malaysian Ringgit and Philippine Peso on average continued being trade developments. For PHP, it also didn’t hurt that Philippine CPI clocked in at 1.3% y/y in November versus 1.2% expected. Meanwhile in India, an unexpected unanimous rate hold from the RBI further lifted the Rupee at the expense of the Nifty 50. 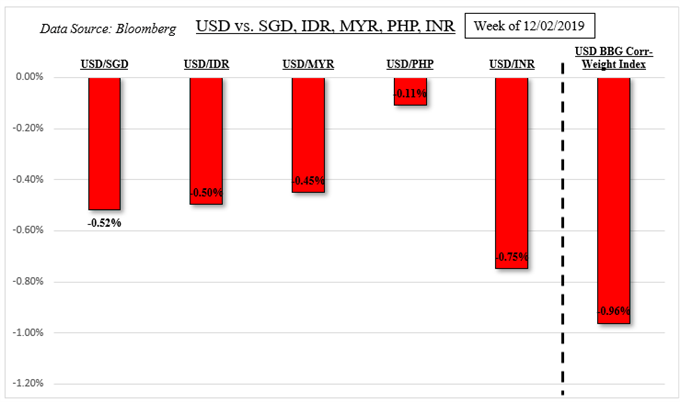 I have been closely following the inverse relationship between my ASEAN-based US Dollar Index and the MSCI Emerging Markets Index. While it is still negative at a -0.27 20-day rolling correlation coefficient, that has been on the decline lately. Meanwhile, the inverse dynamic between ASEAN FX and the 2020 Fed rate path has been rising to about a -0.50 correlation coefficient.

Taking both of these into account, the message still holds that a key driver for USD price action against Asia emerging market currencies is risk trends. This week, investors will be closely watching the last Federal Reserve rate decision of this year on Wednesday. The central bank is expected to leave monetary policy settings unchanged, so markets will be left volatile to its forward guidance.

Next year, Fed funds futures are showing that at least one 25bp rate cut is baked in. After 3 reductions in 2019, the central bank seems to think that rates are where they need to be absent a material change in the outlook. Updated projections for the economy could offer a clue at what to expect in 2020, thus driving sentiment and the S&P 500. Trade wars are a key uncertain ingredient to their estimates however.

It remains to be seen whether US President Donald Trump could raise tariffs against China on December 15. On Friday, White House Economic Adviser Larry Kudlow said that a US-China trade deal “is still close”. Yet earlier last week, Mr Trump backpedaled on hopes of a deal by the middle of this month while escalating tensions with Europe and South America. These may keep the Fed on the edge absent notable gains in CPI. 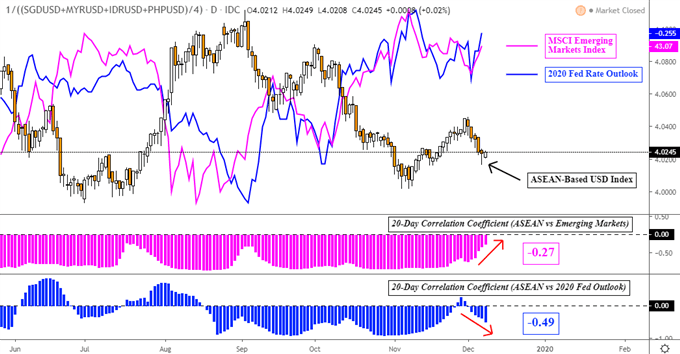 Focusing on the regional docket, USD/PHP will also be eyeing the Philippine Central Bank (BSP) rate decision on Thursday. The BSP is expected to hold benchmark lending rates unchanged at 4.00 percent. Governor Benjamin Diokno even stated last week that their decision this week is dependent on November’s CPI report which overshot estimates.

After the Reserve Bank of India’s surprise unanimous rate hold, the Rupee will be closely watching local inflation and industrial production outcomes on the same day as the BSP. Softer-than-expected outcomes can rekindle USD/INR gains as they diverge with the RBI’s monetary policy outlook. Also due on Thursday is the next round of Singapore retail sales for the month of October.

Aside from the Fed, the US Dollar is awaiting local CPI data (due Wednesday) and retail sales on Friday. The central bank’s data-dependent approach could result in heightened market volatility given surprises that deviate far off economists’ expectations.

Meanwhile, we may see cross-market risk aversion in the event the UK Conservative Party fails to secure a majority on Thursday’s general election. That would reinstate uncertainty around a near-term Brexit deal, likely sending Sterling lower as the US Dollar gains across the board.