Crude oil prices, along with the Swedish Krona and petroleum-linked Norwegian Krone may suffer if trade war perils sap market confidence and prompt a selloff in risk-oriented assets. While US-China relations continue to afflict markets with uncertainty, EU-US trade tensions may also undermine sentiment. This comes amid news that Washington is still looking into levying auto tariffs despite missing a key deadline this month.

Markets continue to be torn between positive and negative developments in the US-China trade war as both sides attempt to ratify “phase 1” of their multi-sequential trade accord. However, the latest news may help uplift sentiment. Over the weekend, Beijing announced that it would raise the penalty for IP theft as a gesture of good faith to placate growing anger in Washington and appease one of their primary concerns with China.

This is a key issue the White House has been pressing which could incentivize US officials to grant China’s request of rolling back tariffs in lockstep with each phase completion in their trade accord. While sentiment-linked assets like NOK, SEK and crude oil prices may initially rally, their gains may be quickly erased if the US does not respond in kind. Or worse, the dispute in Hong Kong drives a wedge between them.

Both chambers of Congress recently passed a controversial bill supporting the pro-democracy protesters in Hong Kong, to which Beijing said it will respond with unspecified counter measures. While US President Donald Trump has indicated he will not sign the bill, his veto may be overridden by the legislature. If it becomes law, it could derail trade talks and put the sentiment-linked NOK, SEK and crude oil prices at risk. 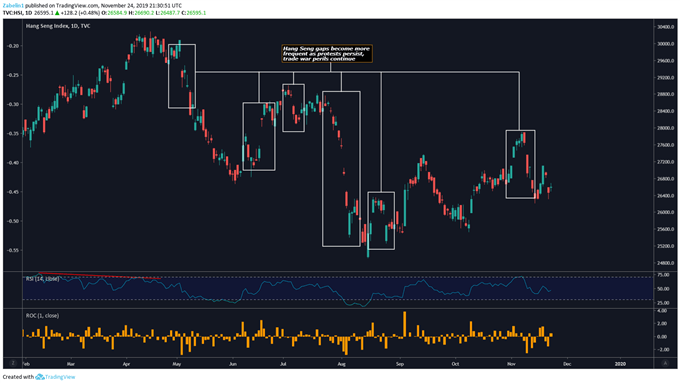 While US-China trade talks continue to undermine market confidence, sentiment-linked assets may be dealt another blow as Washington is reportedly still looking into levying auto tariffs against Europe. Earlier month, Mr. Trump missed a crucial deadline on deciding whether EU-based cars pose a threat to national security. However, Washington is now looking to weaponize Section 301 of the Trade Act of 1974 against the EU.

US GDP Data: How Will it Impact US Dollar, FOMC Outlook?

Quarter-on-quarter GDP on an annualized basis is expected to remain unchanged at 1.9 percent, though the publication of Personal Consumption Expenditure data may garner more attention. The latter is a favorite tool of the Fed’s, and if the report registers a weak figure it could inflame rate cut bets and bring the timeline for easing closer.

The prospect of future liquidity provisions could boost NOK, SEK and crude oil prices if markets interpret looser credit conditions positively rather than as the result of a dire urgency to counter a slowdown. Durable goods orders may also amplify volatility if the report shows manufacturing activity continues to suffer amid the US-China trade war.

The Swedish Krona and Norwegian Krone may encounter some selling pressure if economic data out of the Eurozone – the primary destination for Norway’s and Sweden’s exports – shows weakening demand. Key data to watch for the week will be: consumer confidence, unemployment, CPI and industrial data from the three largest Eurozone economies – Germany, France and Italy.

Throughout the week, consumer confidence and retail sales data may elicit volatility in SEK, though GDP data will likely command the most attention. Year-on-year, the Swedish economy is expected to have grown 1.7 percent in 3Q, more than the prior 1.0 percent print. However, policymakers warned in the most recent Riksbank Financial Stability Report that growth is expected to remain subdued for a prolonged period.

Softer growth could further cast doubts over the Riksbank’s ability to raise rates at the meeting in December. As of Friday, overnight index swaps are currently only pricing in a 45 percent probability of a hike by year-end. The next hike will almost certainly happen in February, though after that it will remain low for an extended period of time according to the Riksbank. But this in itself poses its own problems.