Build confidence in your own Canadian Dollar trading strategy with the help of our free guide!

Economic news flow out of Canada has been on average churning out at the most disappointing relative to expectations since the end of last year. The Citi Economic Surprise Index for Canada stands at 1.2 as of this writing, down from a peak of 136.40 in June. An increasingly positive outcome translates into higher margins of upside data outcomes. The same health and vigor seen during the summer has now been lost.

As a result, expectations of easing from the Bank of Canada have been on the rise. The central bank has managed to avoid cutting this year, as opposed to the general trend from its major counterparts. With that in mind, similar disappointing data out of the country could underpin near-term BoC easing bets and sink the Canadian Dollar. The markets are pricing in about a 43 percent chance of a 25bp rate cut in January.

October Canadian CPI data will cross the wires on Wednesday. Headline inflation is expected to clock in unchanged from September at 1.9 percent y/y and 0.3% m/m (up from -0.4% prior). On Friday, local retail sales will be released. Sales are expected to shrink 0.3% m/m in September, contracting faster than the -0.1% outcome in August. A worse-than-expected result would mean the sharpest deterioration so far this year.

AUD/CAD has been sinking towards a near-term rising support line from October. This followed a stall under key resistance (0.9105 – 0.9144) which was accompanied by negative RSI divergence. The latter indicated fading upside momentum. The trend line may hold, pushing AUD/CAD higher towards another retest of the psychological area above it. Otherwise, a daily close lower may expose October lows. 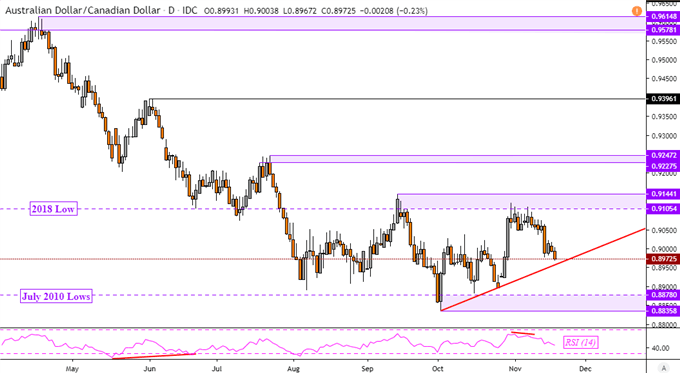 Meanwhile, NZD/CAD has also stalled at the critical falling channel from March – blue lines below. Sitting under the pair is a near-term rising support line from October. A dismal Canadian CPI report may push prices into and above the key resistance range between 0.8459 and 0.8503. Confirming this with another daily close to the upside could pave the way for a reversal of the dominant downtrend since March. 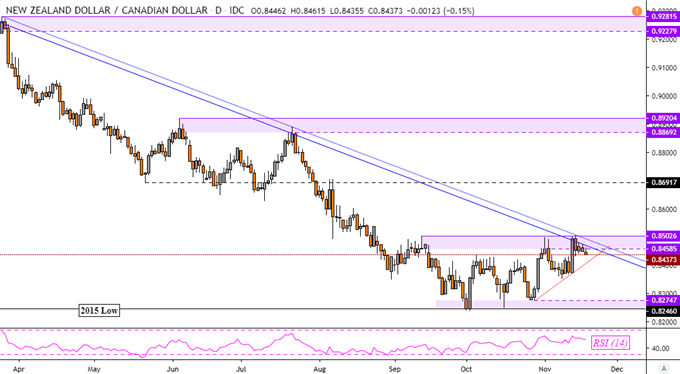 This is as GBP/CAD closed above resistance at 1.7094 on volatile UK election polling. However, prices have stalled under rising support from October – pink lines below. The presence of negative RSI divergence shows fading upside momentum which may precede a turn lower. That would place the focus on a near-term rising support line from October – blue-dashed line. A daily close under this exposes 1.6851 followed by 1.6727. 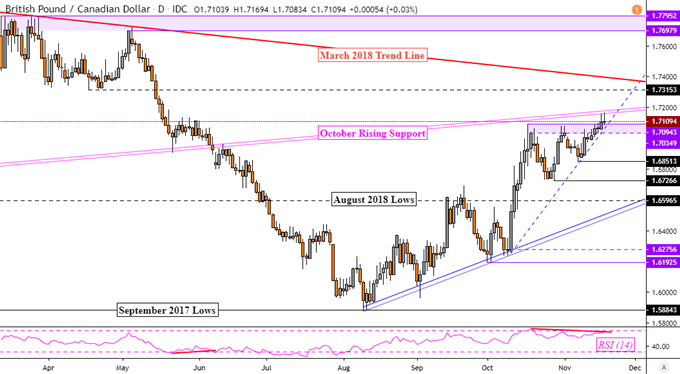