Even though the US Dollar weakened on average against the major currencies last week, for the most part it outperformed against its ASEAN counterparts. This was not without obstacles however. As expected, developments in US-China trade talks continued to be the primary fundamental driver for the Singapore Dollar, Indonesian Rupiah, Malaysian Ringgit and Philippine Peso.

The latter helps explain how the SGD, MYR, PHP and IDR saw a cautious rise towards the end of last week. Regional events such as better-than-expected Singapore retail sales, a rate hold from the Philippine Central Bank and in-line Malaysian GDP data passed without much fireworks for their respective currencies. More of the same fundamental dynamics may be ahead. 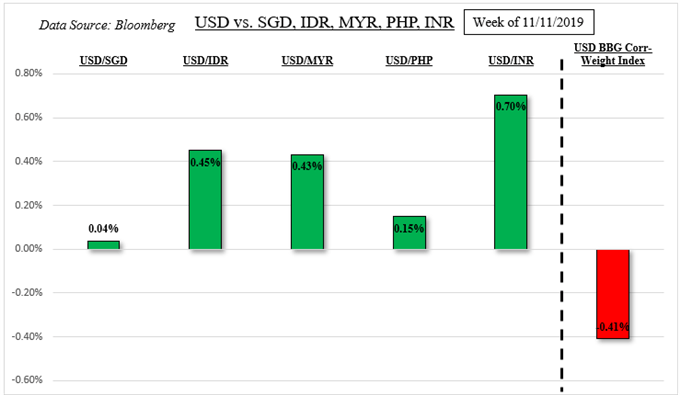 The 20-day rolling correlation coefficient between my ASEAN-based US Dollar index and the MSCI Emerging Markets holds at -0.92. This is unchanged from last week and a value at -1 implies a perfect inverse relationship. With that in mind, US-China trade talks will likely remain the primary factor driving USD/SGD, USD/IDR, USD/PHP and USD/MYR price action.

Key obstacles remain on this front. China has hinted that it would like to see the US not only pause raising tariffs against it, but also begin unwinding them. US President Donald Trump has shown reluctance to commit to this condition. The emphasis on trade talks is underpinned by what appears to be a Fed that is neutral on rates. A sudden collapse on talks risks bringing with it aggressive selling pressure in emerging markets.

Check out my technical outlook for USD/PHP & USD/MYR as well as USD/SGD & USD/IDR! 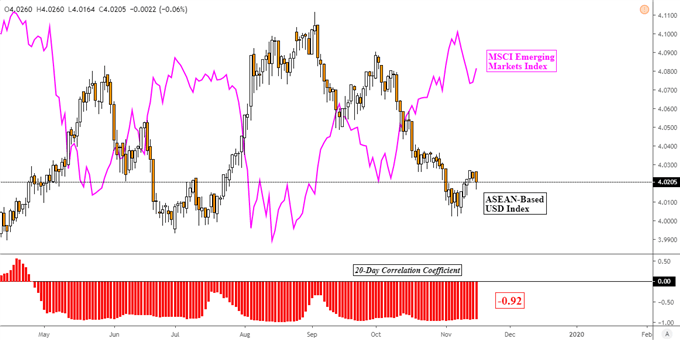 Top-tier regional ASEAN event risk this week will be the Bank of Indonesia interest rate announcement. The central bank is expected to pause its easing cycle after delivering 4 rate cuts this year, holding benchmark borrowing costs at 5.00 percent. Since the Rupiah stabilized, the Bank of Indonesia has shifted its focus away from upholding the value of its currency.

There is also a chance that the finalized Q3 GDP figures for Singapore will cross the wires at an unspecified time. The window does extend to November 25 if not this week. Growth is expected to be revised slightly higher to 0.3 percent y/y from the preliminary 0.1% outcome. On Wednesday the Malaysian Ringgit will be eyeing local CPI data. Malaysian inflation is expected to slow to 1.0 percent in October from 1.1% prior.

Focusing on USD-specific event risk, on Wednesday the FOMC minutes from the October monetary policy announcement will cross the wires. The central bank may reiterate familiar language about maintaining current rate settings as the outlook improves. That may weaken the US Dollar against some of its counterparts across the world if local bond yields decline.