US Dollar Forecast: USD/SEK May Spike on CPI, Powell Speech

The Swedish Krona may fall against the US Dollar if Nordic price growth shows a softer print and reinforces doubt over the ability of the Riksbank to hike rates by December. A sour reading could prompt a selloff in the Krona and propel USD/SEK into a critical price range. The pair’s rise may also me amplified if US CPI data prints a higher-than-expected figure against the backdrop of Fed Chairman Jerome Powell’s testimony.

Year-to-date, the Swedish Krona is the worst-performing G10 currency with -8.78 total returns. The Swedish economy has been afflicted with slowing growth as demand from its biggest trading partner – Europe – continues to wane. This is amplified by external headwinds to global growth ranging from cross-continental trade wars – namely the US and China – to escalating geopolitical risks.

Globally, manufacturing has shrunk to such a degree that some are calling it an “industrial recession” and fear it could eventually spill into the services sector. Sweden’s manufacturing PMI (SA) continues to contract with its most recent figures at their lowest point since the Eurozone debt crisis. For Sweden’s export-driven economy, weakening global demand is a key source of angst for domestic producers.

The upcoming CPI data dump will likely reinforce the narrative that overall economic activity is slowing, despite improvement US-China trade talks What traders will be paying particularly close attention to will be the publication of Swedish CPIF data which is expected to show a year-on-year rise of 1.5 percent for October, slightly higher than the prior 1.3 figure in September.

The Riksbank’s inflation target is around two percent, yet price growth has been hovering at three-year lows as part of a broader trend of global disinflation. As such, if key economic indicators such as this one continue to underperform, it will likely cast doubt over the Riksbank’s ability to raise rates this year. Policymakers have reiterated that they intend on bringing the benchmark rate to zero percent by year-end or early 2020.

The highly-watched Prospera Inflation Expectations report was published on Tuesday which showed inflation forecasts came in below the Riksbank’s estimates. This further fueled the expectation that not only will the central bank not be able to raise rates in the next three months or so but may actually cut them. This view only amplifies the bearish bias traders have towards the Swedish Krona.

US CPI data will also be published out of the largest economy in the world with expectations that year-on-year price growth for October remained unchanged at 1.7 percent. A weaker-than-expected reading could raise the likelihood of a cut in 2020 despite the recent comments from Philadelphia Federal Reserve Bank President Patrick Harker who said rates should stay put for now.

This will also be occurring against the backdrop of Fed Chairman Jerome Powell’s address to the Joint Economic Committee. Commentary from Mr. Powell will include his outlook on the economy and will be closely watching for a more nuanced and detailed explanation of the central bank’s policy going forward. US Dollar crosses may be particularly vulnerable to capital inflows and outflows amid the Chairman’s comments.

USD/SEK recently emerged from the Zone 1 congestive zone (see chart below) and is now testing the upper bounds of the 9.6878-9.7228 resistance range. A break above this level with follow-through could signal a bullish resurgence in USD/SEK after the pair broke below the July uptrend amid a market-wide USD selloff. Looking ahead, if a breach is met with follow-through, USD/SEK may rise until it hits 9.8249. 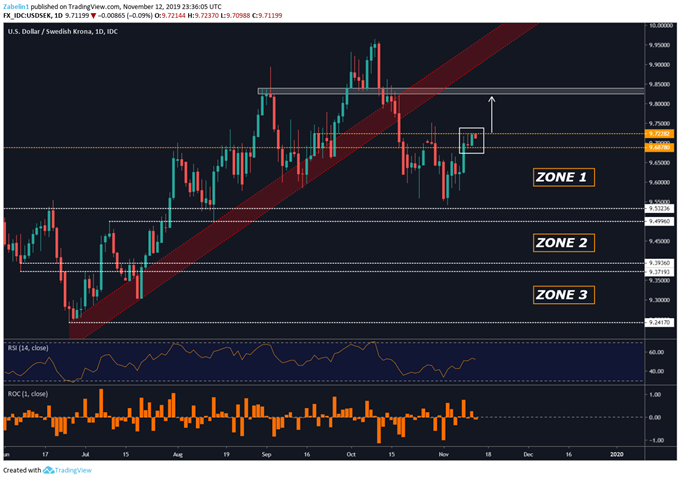