The US Dollar experienced one of its best weeks against its major counterparts in about 5 months, but that same explosive strength failed to flow into most ASEAN currencies and emerging market ones too. Gains in the Greenback could be attributed to rising US bond yields and fading 2020 Federal Reserve easing expectations. Rising bets of a US-China trade deal helped contribute to this for most of the past 5 days.

As anticipated, this is what kept currencies such as the Malaysian Ringgit and Indonesian Rupiah afloat as they gained alongside the MSCI Emerging Markets Index. The former performed particularly well as capital flows continued pouring into Malaysia. However, the Indian Rupee weakened as net foreign equity investment declined 50.6 percent relative to the prior week as Moody’s cut India’s rating outlook to negative. 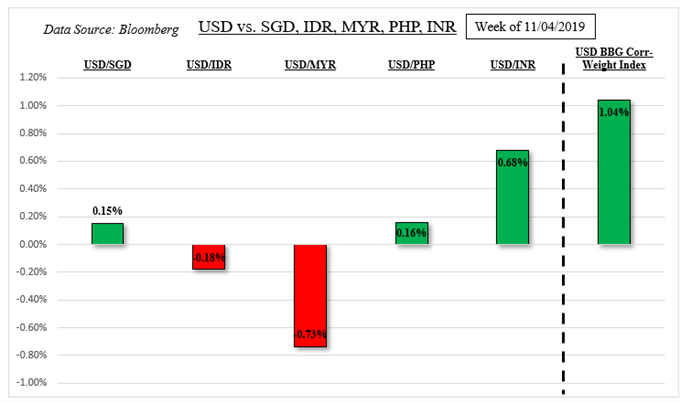 Using my ASEAN-Based US Dollar Index (SGD, IDR, MYR, PHP), it still maintains a very close inverse dynamic with the MSCI Emerging Markets Index. The 20-day rolling correlation coefficient is at -0.92 where a value at -1 implies a perfect inverse relationship. As such, the dominant driver for USD/SGD, USD/IDR, USD/PHP and USD/MYR on average will likely remain ongoing updates in US-China trade talks.

While there was some progress made last week, such as the US mulling to lift about $112b in Chinese tariffs, President Donald Trump jawboned some of trade deal hopes on Friday. Mr Trump said that there is no official agreement or plan to rollback tariffs given an interim trade deal. When this crossed the wires, we saw a dose of risk aversion as ASEAN currencies gave up some of their recent upside progress.

Yet, the markets continue to see conflicting headlines about progress in negotiations. Hours later, Trump said that he plans to sign “any China trade deal” in the US. This remains the stark reality of trade deal news. Just like in the aftermath of the G20 Summit in Japan earlier this year, where a trade truce was supposedly reached, uplifting progress is no guarantee that a resolution is ahead. There continues to be underlying uncertainty.

With that in mind, it may very well be possible that talks collapse and this could lead to a quick and sudden repricing in financial markets. Such risk aversion would likely fuel the US Dollar, particularly against ASEAN FX. The markets will also be watching to see China’s response to the latest developments out of the world’s largest economy. 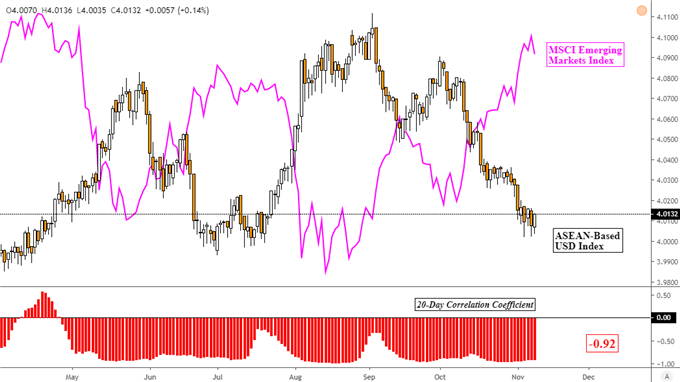 Outside of trade wars, the ASEAN economic docket is fairly heavy. One of the top-tier events will be the Philippine Central Bank (BSP) monetary policy announcement on Thursday. Overnight lending rates are anticipated to be left at 4.00 percent The BSP has been in easing mode this year amid the global slowdown and ongoing trade war. There may be room for further cuts ahead if conditions continue souring.

On the same due, Chinese industrial production and retail sales are due with Malaysian GDP due on Friday. Softer data in the former could fuel risk aversion, China GDP going at its slowest pace in about 30 years. Meanwhile, the Indian Rupee could decline if local CPI data on Wednesday disappoints. USD/INR is close to resuming its dominant uptrend with India’s banking system at risk.

In the United States, we may continue to see an unwinding of dovish monetary policy bets for 2020 if local CPI data surprises higher. On Wednesday headline inflation is expected to clock in at 1.7 percent y/y in October, unchanged from August. A rosy outcome may boost the US Dollar if it continues to push local government bond yields to the upside.