The Brazilian Real was hit hard on Wednesday by a paucity of bids at an auction of new oil drilling rights in its home country. However, the ramifications of this misfire also underline the parlous state of world trade even as markets continue to look hopefully to a settlement between China and the United States.

A dozen oil majors had signed up to vie for blocks of so-called pre-salt reserves beneath the ocean floor off Brazil’s southeast coast. There’s estimated to be 15 billion barrels of crude down there, a reserve nearly twice the size of Norway’s. However, the sale only raised $17 billion of the $26 billion hoped for, attracting scathing market commentary. The currency and the domestic stock-market were both immediately in the firing line. 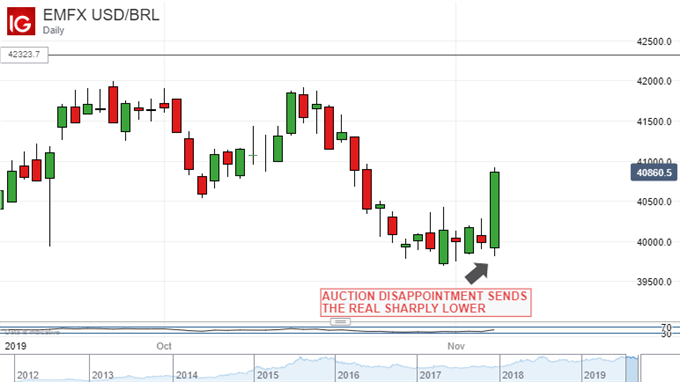 It also dealt a hammer blow to Brazilian ambitions to become the world’s fifth-largest producer (from its current spot at eighth), and also, perhaps, to its desire to join the Organization of Petroleum Exporting Countries.

In truth the oil market was already at a parlous point. OPEC itself is worried about likely levels of global demand as the world moves into 2020. The US-China spat has already seen trade slow around the world, with a pullback in globalization and rising protectionism perhaps set to see this process intensify even if two global titans find a truce to sign.

The cartel is also concerned about the rise of environmental activism across the West and the increasing use of alternative fuel sources. It sees intensifying competition from non-OPEC suppliers, especially US shale.

Drilling for pre-salt reserves can be an expensive business. Although the recovered crude is generally of high quality, the initial investment required for extraction is usually vast. At current low oil prices, it is hardly surprising then that interest in Brazil’s offshore fields should have been so scant. Similar fields in Angola have seen investment scaled back or stopped altogether as costs of production were simply too high.

What is more worrying perhaps from the point of view of the global economy is that the auction shortfall suggests that no one thinks things are going to change much anytime soon.