The US Dollar underperformed against its major counterparts this past week, and its weakness spread into ASEAN and southeast Asia currencies. Those that did particularly well were the Philippine Peso, Singapore Dollar and Malaysian Ringgit. The Indonesian Rupiah was relatively flat, perhaps owed to softer-than-expected local CPI data. Headline Indonesian CPI was 3.13 percent y/y in October versus 3.29% expected.

Much of the Greenback’s weakness could be derived from last week’s Fed interest rate decision and progress in US-China trade talks. The US central bank lowered rates for a third time this year, but it was Chair Jerome Powell who appeared to fuel speculation of another reduction during the first half of next year. Easing credit conditions from the world’s largest economy helps to cool financial condition woes in emerging markets. 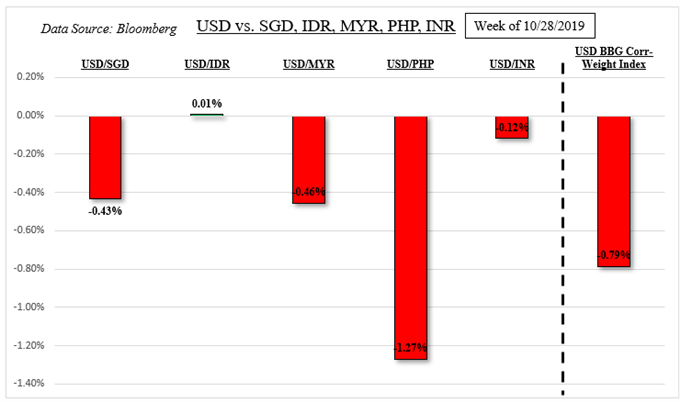 It was a mixed bag for US-China trade talk news this past week. On the one hand, sentiment soured when reports crossed the wires that Beijing was doubtful about a long-term deal with Washington. On the other, China announced that it had achieved a consensus with the United States in principle. Meanwhile, White House Economic Adviser Larry Kudlow still reminded watchers that tariff hikes could “still be on the table”.

For now, the markets appear to be hopeful as the S&P 500 closed at a new record on Friday. This is as the MSCI Emerging Markets Index reached its highest since July. The climb in US front-end government bond yields on Friday underpinned the rosy mood in investors as demand for safe havens waned. For the highly-liquid US Dollar, this bodes ill, especially against ASEAN currencies.

Looking at the next chart below, take note of the very close inverse relationship between an ASEAN-based USD index (composed of SGD, PHP, IDR and MYR) against emerging markets. The 20-day rolling correlation coefficient stands at -0.95. A value at -1 indicates a perfect inverse relationship. As such, the key drivers for ASEAN currencies ahead will likely remain what occurs with updates in trade talks. 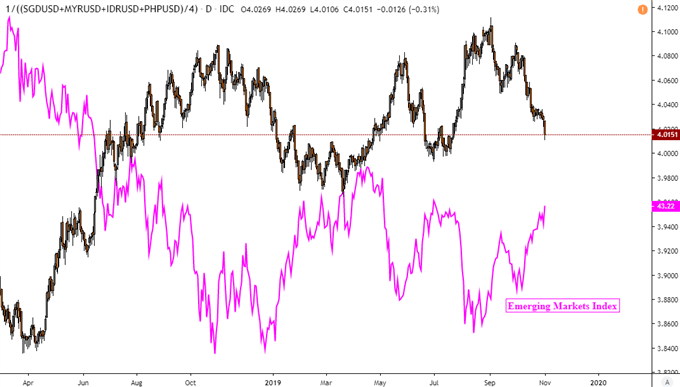 Shifting my attention to regional ASEAN event risk, the week ahead contains plenty. The densest day will be Tuesday where India and Caixin China PMI will cross the wires. Singapore PMI is on Monday. USD/PHP will be eyeing local inflation data. Philippine CPI is expected to soften to 0.8% y/y in October from 0.9%. USD/IDR could be vulnerable to slowing growth.

On the same day, Indonesia GDP is anticipated to weaken to 3.04% q/q in Q3 from 4.2 prior. Topping it off will be the Bank of Malaysia monetary policy announcement at 7:00 GMT. Benchmark lending rates are expected to be left unchanged at 3.00 percent, placing the focus for Ringgit traders on their forward guidance. Then on Thursday, USD/PHP eyes Philippine GDP before China trade data crosses the wires on Friday.

On the whole, rosy surprises in US economic data have been fading since September. While US NFPs outperformed last week, there was the largest reduction in manufacturing payrolls since 2009. If this trend continues, softer ISM non-manufacturing PMI and University of Michigan sentiment could fuel Fed rate cut bets. That may soften the US Dollar, but potentially balance out of risk aversion kicks in.

For now capital continues flowing into emerging markets – see chart below. This has been helping to drive gains in the Singapore Dollar and Philippine Peso. Should US-China trade optimism continue, this dynamic may keep seeing follow-through. Underperformance in US manufacturing underpins the urgency for a trade deal for the administration. But, given the unpredictability of negotiations, that is not a guarantee. 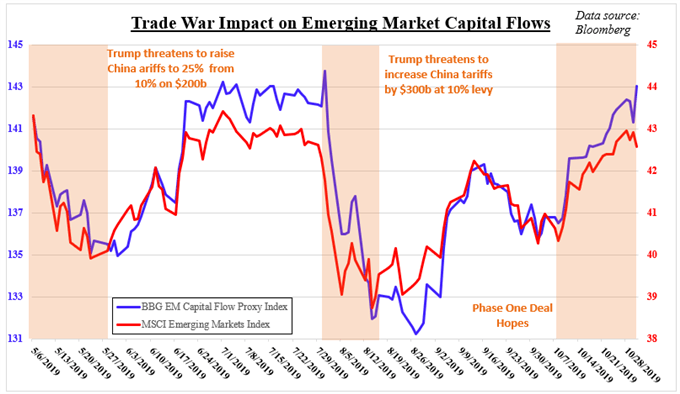