US Dollar May Rise vs NOK and SEK on FOMC, Q3 Earnings, GDP Data

The US Dollar may rise against SEK and NOK amid a hurricane of volatility whipped up from a sea of critical economic data, central bank rate decisions, 3Q GDP data and earnings reports against the backdrop of political risk. The biggest event for the week will likely be the FOMC rate decision which may induce cross-asset convulsions against the backdrop of crucial growth data and geopolitical developments.

GBP and its partners will likely move erratically throughout the week as Brexit negotiations continue to rattle market sentiment. This week, UK Prime Minister Boris Johnson will attempt to gather the support of two-thirds of Parliament to trigger a December 12 election as a way to consolidate power and push through his Brexit deal. However, the EU has not decided if they will grant an extension beyond the October 31 deadline.

Overnight index swaps are currently pricing in an overwhelming probability of a third rate cut from the Fed this year as the central bank continues to stealthily pump the financial system with liquidity via repo operations. While easing is widely expected, the US Dollar may rise if officials elucidate investors as to why they are easing credit conditions. US GDP will also be published on the same day and may amplify volatility.

Fed officials have repeatedly reiterated that they are on a data-dependent path and will adjust policy in accordance to the circumstances. Therefore, if the central bank is cutting rates, the implicit message is the fundamentals are eroding so much that it is requiring them to practically undo all of their tightening last year. As such, the US Dollar may rise if sentiment sours and investors start prioritizing liquidity over returns.

Apple 3Q Earnings and More: How Will Markets React?

This week, a cascade of company earnings will wash over markets this week and may contribute to what is an already-packed week. Just 10 of the companies – out of a list of over 30 – creates a total market cap of over $2.3 trillion. If markets see softer growth out of these big market players, it could sour sentiment and push USD and JPY higher at the expense of risk-oriented Nordic FX as traders reassess the global growth trajectory.

What are some of the key factors impacting company earnings this year?

Eurozone, French and Italian GDP data may rattle regional markets against the backdrop of political oscillations from Brexit. This comes shortly after Euro-area manufacturing PMI data for October showed another contraction, with Germany’s showing a catastrophic drop to 41.9. As the largest economy in the Eurozone and the world’s third-largest export economy, soft data from them sends a chilling message.

Eurozone Economic Data Has Been Tending to Underperform Relative to Expectations

The region continues to struggle with lackluster growth and dimming inflationary prospects against the backdrop of a “synchronized slowdown” in the global economy. Last week, the ECB held rates though the now-retired President Mario Draghi warned that downside risks are “prominent”, and inflation is “muted”. SEK and NOK may fall if growth data shows demand out of their largest client – the Eurozone –is weakening.

In addition to the other cross-Atlantic fundamental risks, the Swedish Krona and Norwegian Krone will be closely watching for their own respective countries’ manufacturing PMI publications. A softer reading could be expected since their export-oriented economies are feeling less wanted amid slower global growth. Norway’s sovereign wealth fund – the largest in the world – 3Q report could also pressure the Krone.

As forecasted, GBP/SEK rapidly declined after the pair retested three-year resistance at 12.6131 but failed to break above it. If the pair continues to fall, it may look to test possible support at 12.3139 near the 23 percent Fibonacci extension level or the steep August uptrend. If the decline is merely a short-term pullback, GBP/SEK may soon mount up for another possible attempt at cracking resistance. 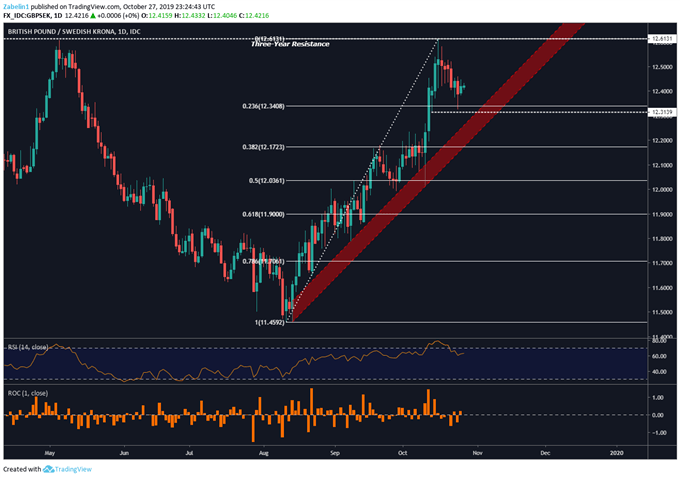 USD/NOK may soon test the July 2019 uptrend, potentially opening the door for a downside breakout with a possible floor around 9.003. Negative RSI divergence shows upside momentum is ebbing, though this does not always precede a reversal. If the pair clears the support channel, traders with short positions wait to add exposure until there is follow-through. 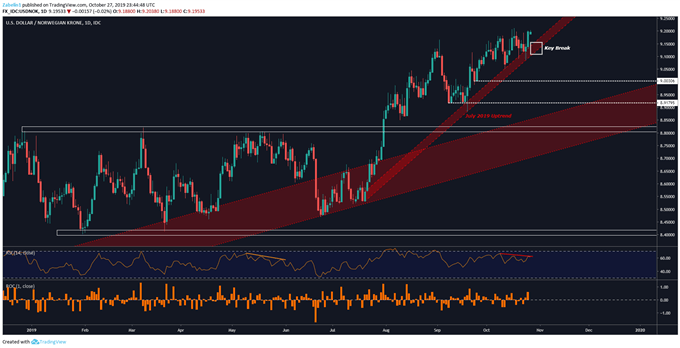