Whatever one thinks of the merits of the Trump administration’s economic program, it is surely unorthodox relative to its recent predecessors. A single common thread appears to tie together the three main efforts undertaken by the White House: they all appear to beckon inflation.

The signature economic policy achievement for team Trump thus far has been sweeping tax reform passed in late 2017 that amounted to an intake reduction of about $1.45 trillion, according to the CBO. That offered a near-term boost to growth and inflation.

Rearranging international trade is another key goal. The US-China trade war is most notable, but a fitful renegotiation of NAFTA and heightened tensions with the EU bear mention also. The attendant uncertainty and tit-for-tat tariffs have driven up the cost of products and that of doing business in general.

Finally, the President has taken to badgering the Federal Reserve in public, exhorting Chair Jerome Powell and company to slash borrowing costs. This has come alongside praise for would-be US economic strength. Taken at face value, this too invites a pickup in the pace of price growth.

In fact, growth and inflation peaked and turned lower in the first half of 2018. The initial boost from tax cuts seems to have faded: CPI growth is at a two-year low and economic activity is at its most sluggish since early 2016. That may explain the Fed’s dovish turn this year more so than Mr Trump’s goading. 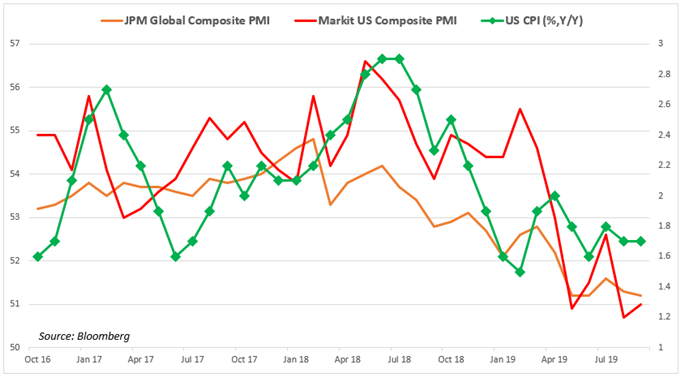 Continued de-globalization – that is, a prolonged or even escalated trade war – may yet nudge up prices further. That seems unlikely to overpower disinflationary forces however, including those born of its own disruptive influence on global supply chains. As for Fed rate cuts, they seem to be struggling to loosen policy.

On balance, all this might translate into lower gold prices.

The metal began a cautious recovery alongside priced-in inflation expectations (measured by the “breakeven” rate on the chart below) in early 2016. That seems sensible: it is a monetary devaluation hedge. Price growth bets have since collapsed alongside floundering economic performance however.

For its part, gold has managed to prolong its advance as markets recalibrated for a turn from tightening to easing Fed monetary policy. That shift has probably run its course by now, with investors’ already ultra-dovish outlook allowing relatively little room to reprice further in the same direction.

In the meantime, the markets appear to be stockpiling cash. That has potential to drive the US Dollar higher as capital flows to the unrivaled liquidity of the world’s top reserve currency, activating the next phase in a two-year uptrend. That bodes ill for anti-fiat assets that gold epitomizes. 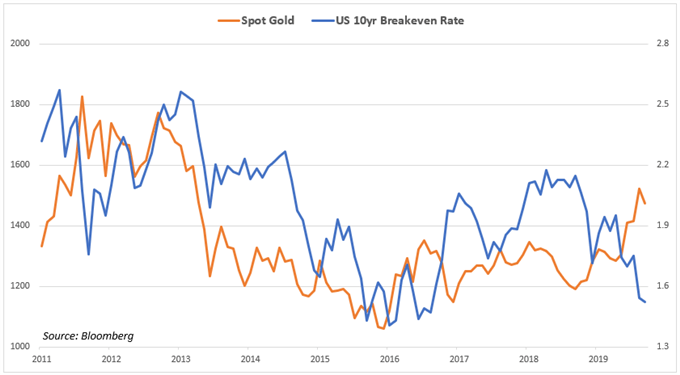