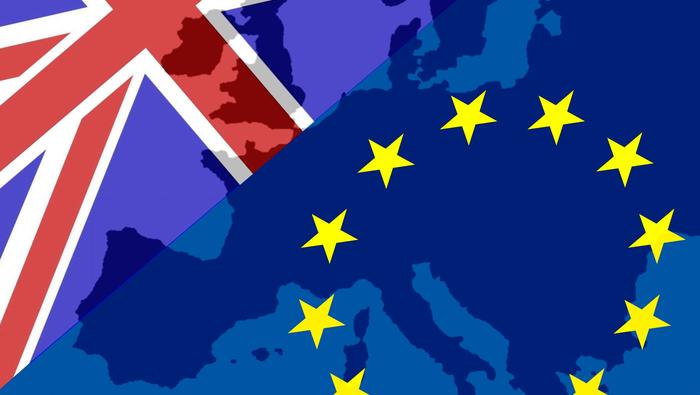 Join me on Wednesdays at 00:00 GMT as I cover what IG Client Sentiment is saying about the prevailing trends in financial markets!

In today’s webinar, I looked at what the latest readings in IG Client Sentiment were uncovering about the outlook for the British Pound against some of its major counterparts. This is in conjunction with a fundamental backdrop where a delay in Brexit this month risks derailing recent upside progress in Sterling. The consequence for risk trends are also high amid tense trade negotiations between the US and China.

To learn more about using IG Client Sentiment in your own analysis, check out our free trading guide!

Since early August, the British Pound has climbed about 6.9 percent against the US Dollar. Accompanying this uptrend was dwindling GBP/USD upside bets. This took net-long positioning readings from about 80 percent roughly 3 months ago to now just around the 50% midpoint. In other words, traders are now more evenly split between bullish and bearish calls.

According to the IG Client Sentiment Report from October 22, the combination of current sentiment and recent changes offers a further mixed GBP/USD trading bias. Those biased short are 13.08% lower from yesterday but 27.17% higher from last week. We typically take a contrarian view to crowd sentiment, and an unwinding in net-short interest could pave the way for a reversal in near-term Sterling strength. 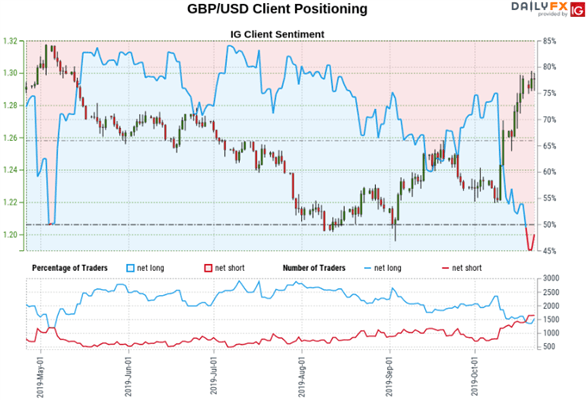 On a daily chart, the uptrend in GBP/USD appears to have stalled. Signs of indecision loom as a Bearish Harami candlestick pattern risks paving the way for a reversal. Prices are eyeing near-term support which is a range between 1.2773 and 1.2798. A close under this barrier could open the door to testing former highs from September. Otherwise, clearing resistance at 1.3001 prolongs the uptrend. 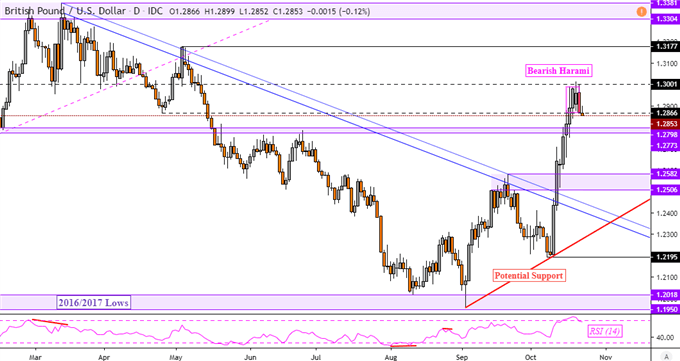 Against the Japanese Yen, the British Pound is facing a similar scenario from a positioning standpoint. Accompanying the uptrend since August has been fading net-long GBP/JPY positioning as prices rose about 10 percent. This has left traders close to evenly split in their bullish or bearish calls, down from about 75 percent net-long bias about 3 months ago.

Looking to the IG Client Sentiment Report, the combination of current sentiment and recent changes offers a further mixed GBP/JPY trading bias. While net-short positioning is down about 5.86 percent from yesterday, this is in comparison to a 32.03% uptick from last week. Still, a reversal that revives fading net-long interest could be in the cards, offering those biased higher a sign of caution. 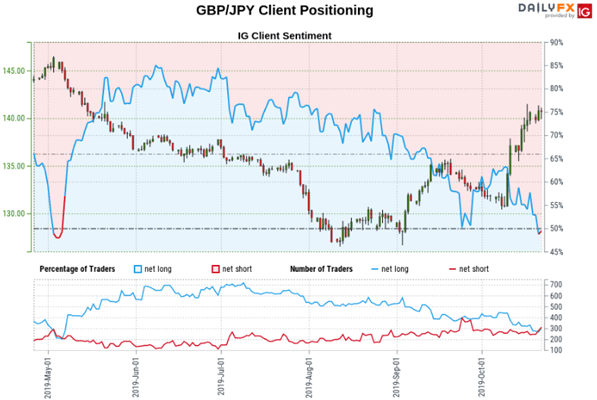 GBP/JPY has also stalled under near-term resistance which is a range between 140.69 and 141.51. This has left the pair eyeing immediate support at 137.79 which is the former high from July. A daily close under then places the focus on the former April 2017 low at 135.61. Otherwise, closing above immediate resistance opens the door to prolonging the GBP/JPY uptrend. 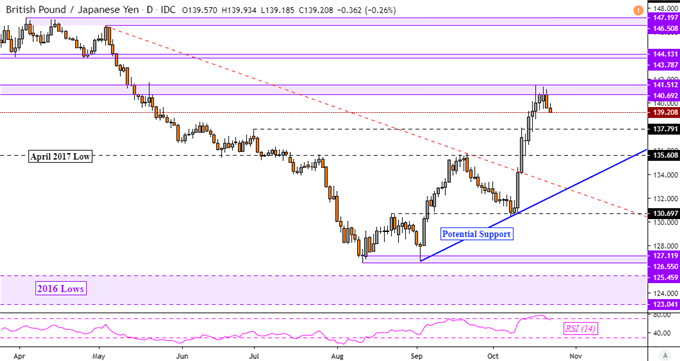