The British Pound may oscillate between Brexit hopes and fears in the week ahead while the Swedish Krona and Norwegian krone may suffer amid the uncertainty. Volatility in Nordic FX may be amplified by the Riksbank, Norges Bank and ECB rate decisions and the release of Eurozone PMI data. Geopolitical risk may be the primary force driving volatility this week and will therefore need to be closely monitored.

At the start of Monday’s Asia trading session, the British Pound gapped lower against G10 FX majors after the UK Parliament voted down Prime Minister Boris Johnson’s Brexit deal that he had agreed on with the EU. The PM sent an official request to Brussels asking for an extension, though accompanying it was also his argument against delaying the divorce. On Monday, another key vote is expected to take place.

This week, ECB officials are expected to hold interest rates after the central bank cut lending costs and re-introduced QE at its last meeting. Officials recently stated they are not considering more easing in coming months. However, deteriorating global growth prospects amid a “synchronized slowdown” and Brexit may force the ECB to reconsider its policy stance if inflationary prospects continue to fade into the distance.

Not Looking too Hot

The Euro may suffer if the ECB stokes further regional growth concerns along with NOK and SEK. Europe is the primary destination for over 70 percent of all of Sweden’s and Norway’s cross-border sales and is therefore a crucial source of growth for their export-driven economies. A poor reading in Eurozone PMI data may amplify these concerns and further pressure the Euro, Krona and Krone.

Traders are expecting for the Riksbank to hold interest rates at -0.25 percent and further delay its planned rate hike for the year. What markets have not priced in is the degree of pessimism that may cloud over officials’ outlook. Weakening demand from the Eurozone – the destination for 80% of Sweden’s exports – and Brexit risks have made it difficult for policymakers to raise rates in a fundamentally volatile environment.

Much like the Riksbank, the Norges Bank is also expected to hold rates after hiking rates three times this year and going against the gradient of global easing. However, weakening global demand may soon hit the petroleum-based Norwegian economy soon especially if a no-deal Brexit sends shockwaves across global markets. At this next meeting, NOK may fall if their message carries unexpectedly alarming overtones.

Since August 10, EUR/GBP has declined over four percent and is now trading in a five month-low range between 0.85931-0.8652. Over the past four days, EUR/GBP has remained broadly unchanged, indicating indecision as manifested by the short-bodied candles with long wicks extending from either end. Looking ahead, the pair may hover between these levels until more clarity is given on Brexit. 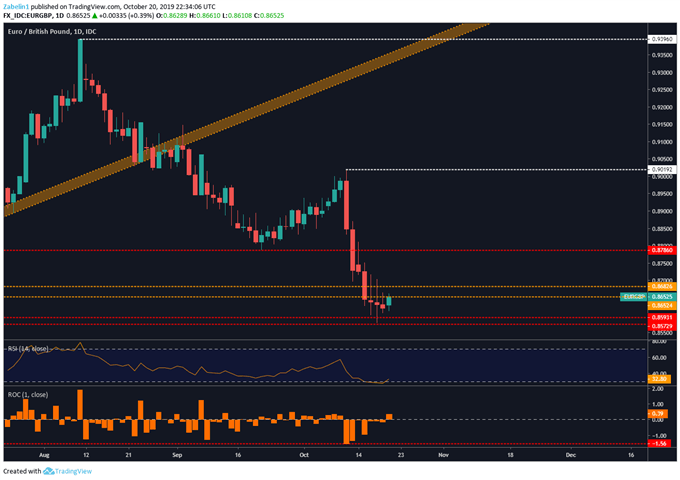 Last week, GBP/SEK flirted with five-month resistance at 12.6074. However, the pair appears to be losing steam and is now possibly looking to retreat to ascending support (red channel). In the short term, traders may wait for GBP/SEK to touch support and bounce back before adding additional exposure. Conversely, a break below it with follow-through could precede an aggressive selloff if traders believe the steep uptrend is no longer valid. 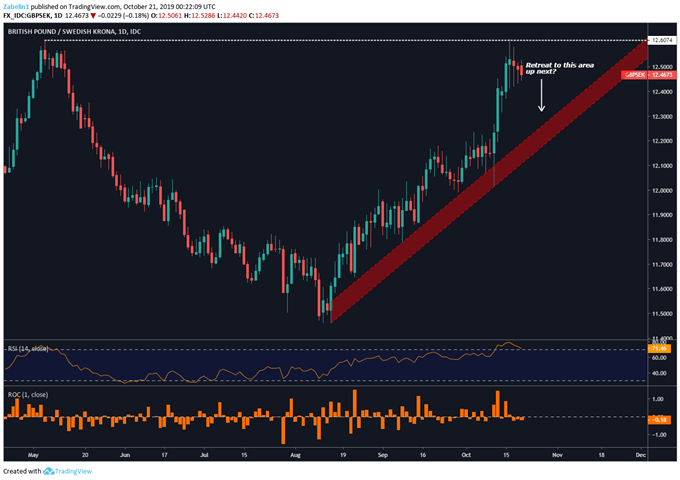 Since October 10, GBP/NOK has climbed over six percent and is now trading at a three-year high. However, the pair may soon retreat and encounter friction between 11.4820-11.5188 before possibly retesting the rising support channel. 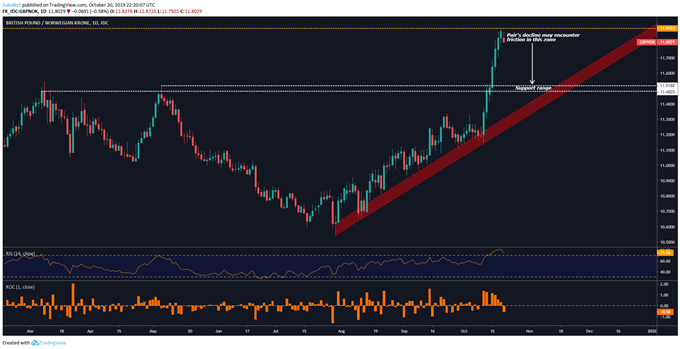