US Dollar Outlook on SGD, INR and IDR Amid Trade Talks, China GDP

The highly-liquid US Dollar underperformed against its major counterparts last week as hope of a US-China trade deal lifted sentiment and dampened the appeal of haven assets. Though it wasn’t a smooth ride heading into critical talks last Thursday and Friday that included US President Donald Trump and China’s Vice Premier Liu He. At one point, signs of a lack in progress sent S&P 500 futures lower.

With that in mind, some ASEAN currencies saw cautious gains such as the Singapore Dollar and Philippine Peso. The latter saw a minimal reaction to a smaller-than-expected Philippine current account deficit which was partially offset by imports contracting by the most in 7 years. The Indonesian Rupiah and Malaysian Ringgit were little changed. In South Asia, the Indian Rupee edged narrowly higher. 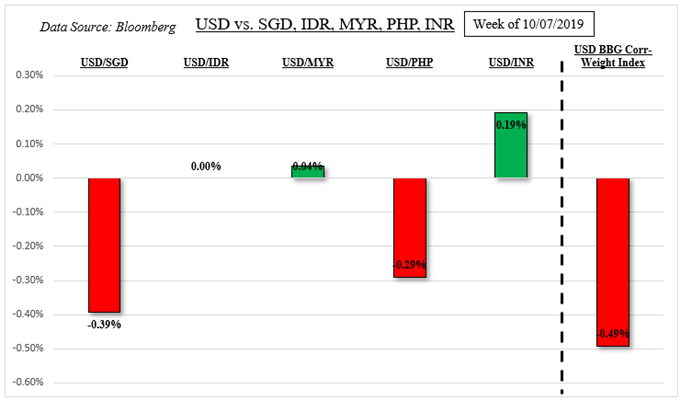 Next Phase in US-China Trade Talks

Financial markets were left somewhat disappointed on Friday as the United States and China reached a partial trade deal. This is despite US Treasury Secretary Steven Mnuchin announcing a hold off in 5% tariffs against China originally planned for this week. These talks were the first part of three phases that could result in a signed deal in the middle of November at the Asia-Pacific Economic Cooperation (APEC) meeting in Chile.

Mr Trump added that they have come to a deal on intellectual property, financial services and large agricultural purchases. Discussions on Huawei, China’s telecom giant, are to be dealt with in later. A decision on December tariff hikes is still on the table. Until November, this leaves markets vulnerable to updates in trade progress. As such, this uncertainty may have been what soured mood in the final hours of last week.

The week ahead contains plenty of news that will reveal further information about the state of global growth and can thus impact emerging markets and ASEAN currencies. Namely, third quarter China GDP will cross the wires on Friday. The world’s second-largest economy is expected to continue slowing, with expansion coming in at 6.1 percent y/y from 6.2 prior. These are the softest readings in over 30 years.

Data outcomes from China are still tending to underperform relative to economists’ expectations, opening the door to further weakness. That may keep emerging markets under pressure and fuel capital outflows which may sink currencies such as the Singapore Dollar and Philippine Peso against the US Dollar. Other key measurements will also cross the wires from China such as industrial production and retail sales.

Meanwhile, the International Monetary Fund (IMF) and World Bank will hold their annual meeting in the US on Tuesday. These institutions have been persistently citing trade war uncertainty impacting global GDP. More of the same may sour sentiment and boost USD. On the same day, we will also see how Indonesian and Indian trade have been faring. The Indian Rupee and Indonesian Rupiah will be waiting.

Speaking of INR, later today the latest local inflation report will cross the wires. Indian CPI is expected to clock in at 3.81 percent y/y in September, up from 3.21 in August. However, the sudden uptick is anticipated due to seasonal factors (such as food prices) and may not significantly alter the underlying trend expected from the Reserve Bank of India. The central bank has made its view clear on the need for more easing.

Focus Turns to US Data and Fed Rate Cut Bets

With a major part in trade talks behind us, the focus for financial markets may turn to upcoming US economic data. Retail sales, housing starts and industrial production are due throughout the week. Lately, upside surprises in local data have been lacking with 10-year low manufacturing PMI and slightly softer CPI data. If this trend continues, we may see a pickup in October Fed rate cut expectations.

That may weaken the US Dollar ahead, but something to keep in mind is that fading confidence in US-China trade progress can boost the currency on haven demand. Back in June the MSCI Emerging Markets Index peaked after the G20 Summit in Japan where the two countries reached a trade truce. As such, there is no guarantee that tensions could resurface down the road and progress ought to be treated with a grain of salt. 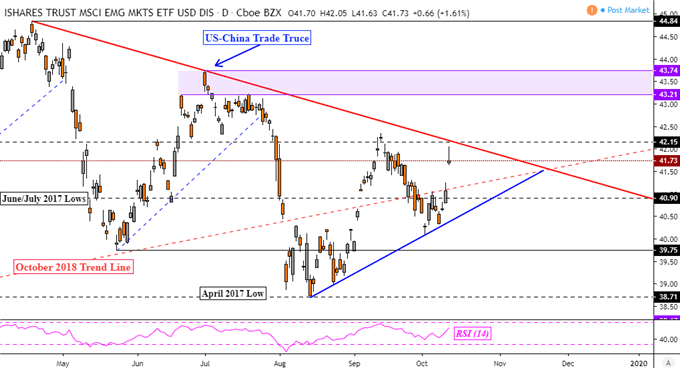