US Dollar May Gain on Singapore Dollar, Rupee if Trade Talks Falter

The US Dollar, using a correlation-weighted index, ended last week little changed against its major counterparts. Dismal ISM manufacturing PMI data showed activity contracting by the most in over 10 years. This was then followed by similar disappointing non-manufacturing readings, ending with a mixed jobs report on Friday. Expectations of a 25bp rate cut from the Fed this month rose to about a 73 percent probability, up from 40 earlier in the week.

Increasingly dovish expectations from the US helped most ASEAN currencies to gain some ground against the Greenback by the end of the week. This is despite Singapore PMI and Philippine CPI data disappointing. A notable exception in the Southeast Asia region was the Indian Rupee, which saw some weakness after the Reserve Bank of India cut rates and signaled more to come as growth estimates were downgraded. 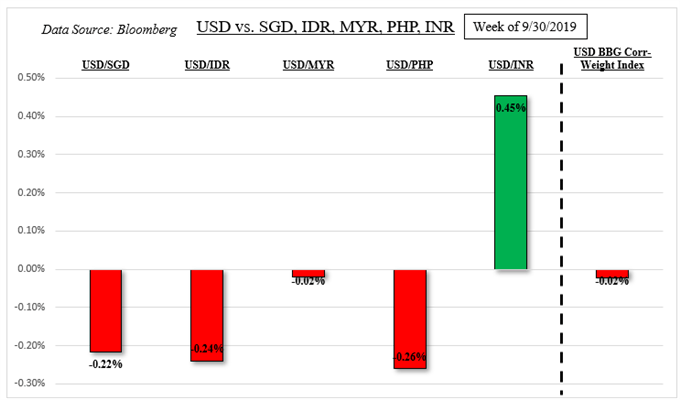 Roughly a month ago, US President Donald Trump delayed imposing a tariff hike against China to the tune of $250b. This postponement is meant to last until the middle of October to see if the two countries could come to a trade deal in the interim. As a reminder, the prolonged trade war has been denting global growth prospects as manufacturing declines alongside business confidence. Emerging markets are being hit hard.

China’s Vice Premier Lie He will be visiting Washington for critical trade talks on Thursday. This is expected to go on until Friday and the outcome may even cross the wires after market close. Signs of the two nations failing to come to an agreement can quickly dent risk trends and boost the highly-liquid US Dollar. Although President Donald Trump says there is a “very good chance” of making a deal.

Focusing on the ASEAN docket, we do have key event risk due from Singapore. Most notably, no later than October 14, the Monetary Authority of Singapore (MAS) will be releasing its semi-annual policy statement. We will also receive the first estimate of local third quarter GDP at an unspecified time after October 7. Economists anticipate Singapore growth to clock in at 0.2 percent y/y from 0.1% in the second quarter.

Singapore’s economy is expanding at its weakest pace since 2009, following the slowdown in global growth and major countries such as China (which is expanding at its weakest in 30 years). It is thus unsurprising that economists anticipate the MAS to shift its stance of gradual appreciation in the slope of the Singapore Dollar policy band, perhaps to even 0. That may in turn send the SGD lower against other currencies.

The Philippine Peso will be waiting for the next round of local trade data. Philippine exports are anticipated to slow to 1.4 percent y/y in August from 3.5 in July as the trade deficit widens. Meanwhile, the Rupee may fall if Indian industrial production data underpins the need for further RBI easing. Local output is expected to rise just 1.8 percent y/y in August, down from 4.3 in July.

Given the rise in October Fed rate cut bets as of late, the US Dollar could be in for a volatile week given a plethora of event risk. Arguably, the most notable is the FOMC meeting minutes which could continue to reinforce the divide in policymakers’ forward guidance for rates. This may cool near-term easing expectations and boost the US Dollar as risk trends sour.

We will also receive more commentary from Fed Chair Jerome Powell on Tuesday. Meanwhile, last week showed the tendency of disappointing data outcomes. Should we see similar deterioration in upcoming local CPI and University of Michigan Sentiment data, that could reinforce dovish expectations. That would perhaps offer support for the Malaysian Ringgit and Indonesian Rupiah against USD.