US Dollar Outlook: Indian Rupee May Fall on RBI, PHP too on CPI

The US Dollar mostly outperformed its ASEAN and some of its Southeastern Asia currency counterparts this past week. The bulk of its outperformance occurred during the middle of the week. That was when better-than-expected US housing sales sent local bond yields to the upside and US President Donald Trump talked up hopes of a trade deal with China.

As the SGD, IDR and MYR weakened, the PHP and INR rose against the Greenback. USD/PHP fell as the BSP reduced near-term rate cut expectations. Meanwhile, INR appreciated towards the end of the week as the Reserve Bank of India drained about 340.4b Rupees at an overnight reverse repo auction. India also mulled easing foreign investment caps in government bonds. 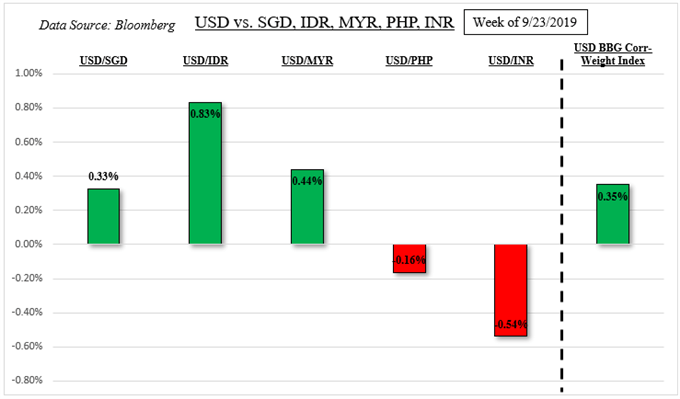 A primary source of volatility for emerging market assets remains on US-China trade talks. While Mr Trump noted there is a “good chance” that a deal between the two nations could occur during last week, on Friday it was reported that the White House was mulling imposing limits on investor portfolio flows into China. This sensitivity to trade news for developing nations can be seen in the MSCI Emerging Markets Index.

It dropped about 1.3 percent following reports from Washington and likely deprived the Philippine Peso of reaching its full potential. There was no timeline given for when Trump could take action on curbing capital flows into the world’s second-largest economy. This is a worrying development ahead of a highly-anticipated meeting between US and Chinese officials in mid-October to see if there could be a resolution.

Aside from random volatility that would likely be fueled by US-China trade updates, the Indian Rupee is awaiting this week’s RBI monetary policy announcement. Economists are anticipating the Reserve Bank of India to reduce its benchmark repurchase rate to 5.15 percent from 5.40. This follows the August CPI report where prices rose just 3.21 percent y/y, slower than the 3.32% consensus.

The central bank has been easing monetary policy (in addition to most central banks around the world) to stem disinflation and trade war woes. As a reminder, local inflation peaked at about a 5 percent growth rate in 2018. Leaving the door open to further reductions in rates will likely weigh against the Rupee, especially with the update on US-China trade talks to come in the middle of next month.

Meanwhile, PHP traders should note the data-dependent tone that Philippine Central Bank Governor Benjamin Diokno left for markets last week. Their hesitation to commit on further easing places the focus for USD/PHP on local CPI data on Friday. Price growth is expected to slow to 1.0 percent year-over-year in September from 1.7 prior. A softer outcome can reverse the cautious gains PHP accumulated last week.

Locally, the US Dollar has plenty of economic event risk to await ahead. This ranges from durable goods orders to September’s local jobs report. Data has been tending to surprise to the upside by a greater margin as of late. More of the same can cool near-term Fed easing bets and may induce risk aversion as markets price out looser credit conditions. That may push the Greenback higher against the Singapore Dollar.

Check out my Singapore Dollar currency profile to get acquainted with its unique character in markets!