The US Dollar may rise vs NOK and SEK in the week ahead against the backdrop of escalating US-EU trade tensions. An avalanche of key economic data is also set to be released this week which could push the Greenback higher if it cools the urgency for the Fed to cut interest rates. Brexit drama may also put a premium on liquidity and help boost the US Dollar while a discount may be put on riskier assets like NOK and SEK.

US Economic Data: What Does it Mean for Fed Monetary Policy?

US economic data has made a remarkable recovery after significantly underperforming relative to economists’ estimates for almost half a year. With data improving, markets may start getting nauseous at the thought the Fed may not cut rates as soon or as aggressively as they’d like. Fed Chairman Jerome Powell has reiterated that the central bank is on a data dependent path and will adjust interest rates accordingly.

Improvement in US Data May Continue to Push US Dollar Higher

Therefore, if the data suggests the urgency for monetary stimulus is lacking – or at least significantly dialed down – investors may panic and redirect their capital into the Greenback. If risk aversion ensues, the cycle-sensitive Swedish Krona and Norwegian Krona may suffer along with equity markets.

This week, the WTO is set to deliver a final ruling on the dispute over the EU allegedly illegally subsidizing the European-based aircraft maker Airbus SE. The decision will likely rule in the US’s favor and may result in Washington imposing tariffs on European goods ranging from plane parts to luxury goods. However, Brussels is not looking like it will stand down and is in fact preparing its own retaliatory measures.

A similar case was put forward before the WTO except it was over illegal subsidies to the industrial giant Boeing. If the WTO finds the US guilty of violating international trade rules, the EU may impose retaliatory levies approximating $12 billion. This may also prompt Washington to further consider imposing auto tariffs against Europe which will likely hit Germany’s export-heavy DAX the hardest.

Over 70 percent of Sweden’s and Norway’s exports head to Germany, which is already struggling with its own growth as regional demand continues to sputter. An auto import tariff would further pressure the Germany economy – also known as the “steam engine of Europe” – against the backdrop of fading Chinese demand. In this environment, the export-driven Nordic economies would likely suffer along with their respective currencies.

On Sunday, UK Prime Minister Boris Johnson said he does not intend to resign even if his government fails to deliver a deal by the October 31 deadline. However, Mr. Johnson will have to overcome what he calls the “surrender act” which Parliament passed that forces the Prime Minister to ask for an extension if a deal is not agreed upon by the time of the EU summit between October 17-18.

Uncertainty about Brexit continues to undermine investors’ confidence, particularly those stationed in Europe. The economic shockwave of a no-deal outcome could be what tips the sputtering European economy into a recession. Riksbank policymakers have repeatedly expressed worry about the impact of hard Brexit on Sweden’s export-driven economy that is suffering in the midst of a global slowdown.

USD/SEK continues to climb along the June 2019 rising support channel despite a close break below it in mid-September. If the pair retest the support zone, traders may take the opportunity to add exposure to their long positions if USD/SEK does not break below the ascending channel. Fundamental risks this week may be a tailwind for the pair and may cause it to steer away from retesting the multi-month support area. 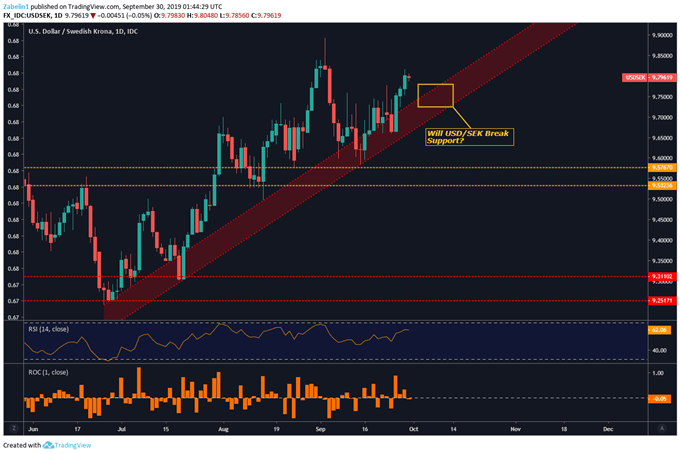 USD/NOK is up a little over 0.40 percent since last week and is now edging modestly closer to testing the 18-year high at 9.1648 (yellow dotted line). A retest of the formidable resistance seems plausible this week, though lasting follow-through beyond that point is uncertain. However, given how USD/NOK continues to climb higher despite rate cuts from the Fed and hikes from the Norges Bank, the prospect of retesting this level is not outlandish. 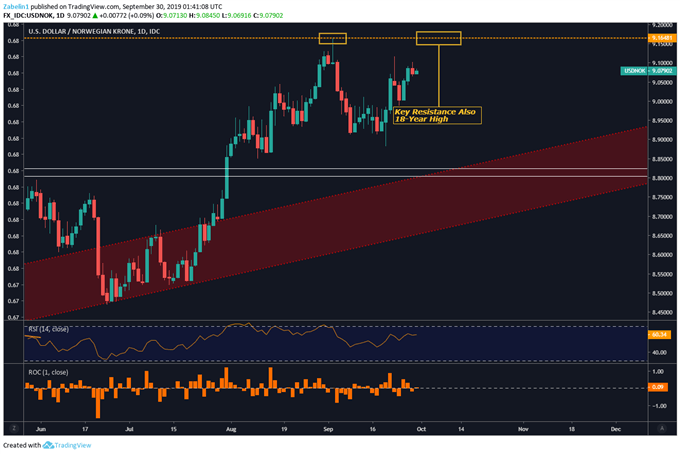