US Dollar May Rise vs. NOK, SEK Ahead of US GDP Data, Trade Wars

The US Dollar may catch a haven bid if overall market sentiment sours amid ongoing US-China trade talks, intensifying Brexit negotiations and US GDP data. The latter will be published at the end of the week and could cause a rally in the Greenback if it cools Fed rate cut bets after the most recent FOMC meeting. Political risk throughout the week may help buoy USD if traders place a premium on safety over returns.

Swedish Krona, Norwegian Krone Expected to be Most Volatile G10 Currencies Against USD

Note: Different color use for British Pound is used to a) signify non-Nordic related volatility and b) highlight added geopolitical risk premium to GBP ahead of key talks this week.

Following the visit of a Chinese trade envoy to Washington, the Office of the USTR published several documents outlining over 400 types of goods out of China that will be exempt from tariffs. However, risk-positive news failed to deliver a long-lasting boost to investors after Trump said he would not accept a half-baked deal and that ending the trade war in 2020 was not a priority.

Officials are preparing for high-level talks in October, the same month Mr. Trump pushed back a $250 billion tariff from October 1 to 15. While he did allude to an inter trade deal, markets may not entirely be put at ease until a conclusive agreement is reached. The economic conflict continues to stoke major volatility across all asset classes and is one of the primary reasons behind the OECD’s recent downward revision of global growth.

This week, the UK Supreme Court may decide whether Prime Minister Boris Johnson’s decision to suspend parliament was lawful. The ruling could derail the PM’s Brexit plan if the courts find his action is constitutionally illegitimate. The October 31 deadline is approaching, and MEPs continue to bicker ahead of a key meeting with EU officials between October 17-18, less than two weeks until the UK’s time is up.

Riksbank policymakers have expressed increasing concern and greater urgency about preparing for a no-deal Brexit as the Swedish export-driven economy continues to suffer amid a global slowdown. Deputy Riksbank Governor Per Jansson said unemployment data has been “really bad” and cited slower growth out of a Germany – Sweden’s largest trading partner – as a key concern.

He also added that there are “fundamental problems in the housing market”, citing high debt levels and housing prices that could pose a system-wide threat. Rising household indebtedness has been a concern among officials after almost a decade of negative interest rates. Borrowers naturally took on substantial sums of debt because the cost to borrow capital was so low but the prudency of their investment standards also fell.

US GDP, Personal Income Data May Cause US Dollar to Rally

On an annualized basis, quarter-on-quarter GDP is expected to show a two percent growth rate, with forecasts that personal income grew by 4.7 percent. A higher-than-expected reading could cool Fed rate cut bets after the most recent FOMC meeting and cause the US Dollar to rally. Data in the US has been tending to outperform relative to expectations, so it would not be surprising to see these reports fall in line with this trend.

USD/NOK continues to travel along the upward-sloping March 2018 support channel despite the recent rate hike from the Norges Bank and rate cut from the Fed. The persistence behind the pair’s climb speaks to strong demand for the US Dollar in light of eroding fundamentals. Looking at a monthly chart, the pair is at its highest point in 17 years, and 24 percent higher than during the peak of the 2008 financial crisis. 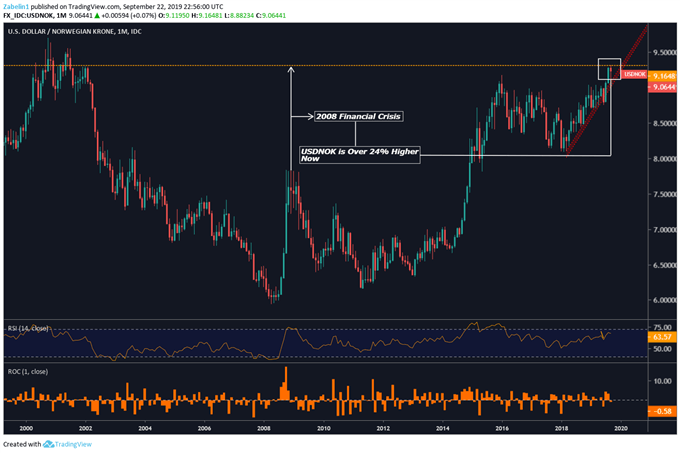 Much like USD/NOK, USD/SEK is trading at 17-year highs and is confidently climbing along a 20-month rising support channel. Year-to-date the pair is up over 10 percent, and the persistent rise since February 2018 signals a strong underlying bullish bias. Looking ahead, traders with long positions may want to add exposure if the pair retreat and re-test the dominant uptrend before resuming its ascension. 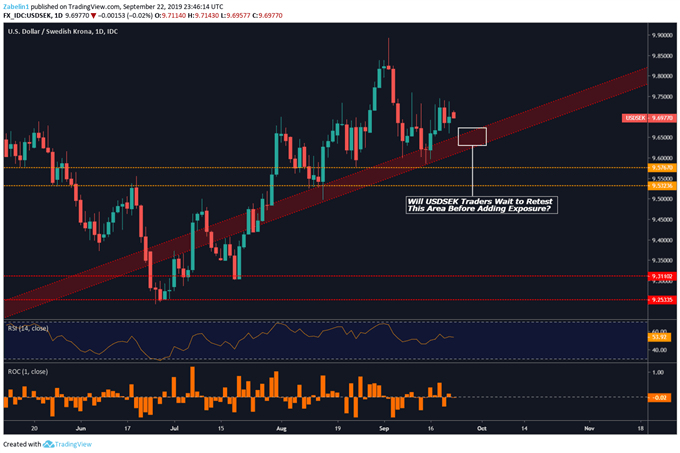