The US Dollar’s complete dominance of the global financial system shines out from a new survey of activity from the Bank of International Settlements.

Despite US-China trade war, ballooning deficits and, let’s be honest, the most divisive presidency in living memory, the greenback is still on one side of fully 88% of all foreign exchange trades, the BIS said. This stark fact also underlines the importance of the Federal Reserve and its monetary policy way beyond US shores.

The Euro’s share of all trades expanded a little, to 32%, with the Japanese Yen retaining third spot despite a loss of about five percentage points in its share since the last survey. The BIS undertakes this research every three years. China’s Yuan failed to progress. It remained the world’s eighth most traded currency, which is where it was three years ago. The unit ranks just after the Swiss Franc. 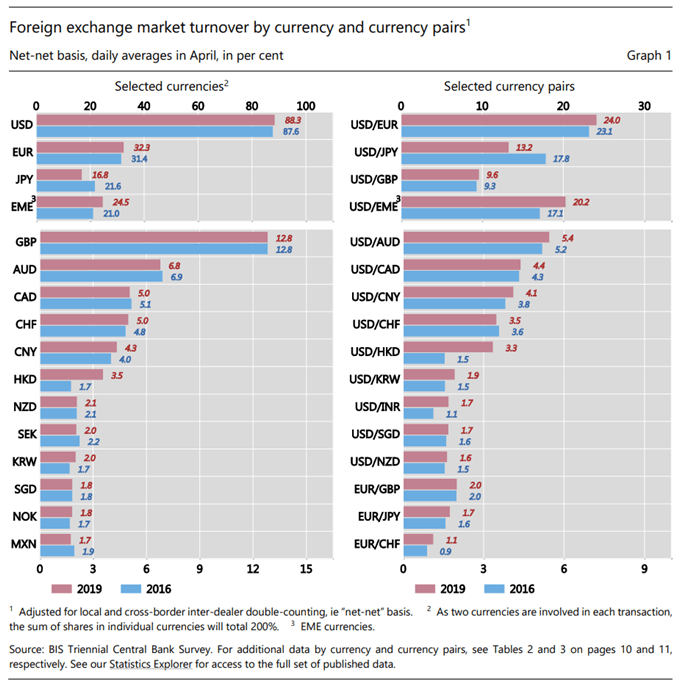 Asia Pacific currencies climbed the rankings. The Hong Kong Dollar doubled its turnover from the previous survey, rising to ninth in the league table, from thirteenth. The Korean Won, Indian Rupee and Indonesian Rupiah all advanced while the Mexican Peso and Turkish Lira lost ground.

Overall foreign exchange turnover reached an eye-watering $6.6 trillion per day, the BIS said, up from $5.1 trillion in the previous survey. Growth in foreign exchange derivatives trading outpaced that of the spot market.

The Dollar was not the only example of dominance in the survey. The UK may be wrestling with Brexit but London has tightened its grip on the enormous foreign exchange market where it’s by far the leading single center. The UK capital has increased its overall marked share by six percentage points in the last three years, giving it 43% of the market. The next largest center, New York, saw its share down to 17% from 20%. The UK also reclaimed its position as the main global hub for trading in interest-rate swaps and over-the counter derivatives.