At first glance, the US Dollar seemed to outperform against its major counterparts when using an equally-weighted index this past week. But the reality is that from a technical standpoint, the Greenback is still in a persistent consolidative mode since the end of July. Its lack of commitment also spread into against some of its ASEAN and Southeast-Asia fiat counterparts.

A couple of notable exclusions this past week were the Singapore Dollar and Indonesian Rupiah – see chart below. The former tends to closely trace the Greenback. The IDR saw most of its decline during the front-half of the week, when an attack on Saudi Arabian energy infrastructure caused an oil shock that triggered risk aversion. The commodity has since partially subsided as markets turned to the Fed and US-China trade talks.

The US central bank delivered its second interest rate cut, keeping the door open to “extensive cuts” should they be needed. Meanwhile, the Bank of Indonesia delivered a third reduction in benchmark lending rates this year. But the Rupiah was left unchanged as the central bank reiterated efforts to guard their currency. Prior to Friday’s close, ASEAN currencies suffered as Chinese delegation teams canceled trips to US farms.

Check out my Singapore Dollar currency profile to get acquainted with its unique character in markets! 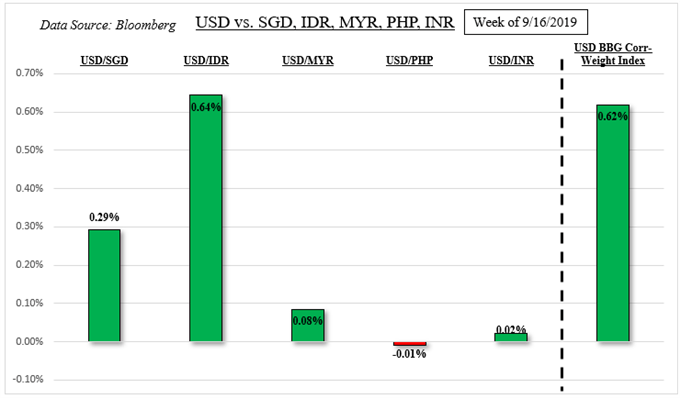 Once top-tier economic event risk passed last week, it was clear how important US-China trade talks were to financial markets. As mentioned earlier, once reports crossed the wires that Chinese officials canceled trips to farms in Montana and Nebraska, aggressive risk aversion kicked in. The MSCI Emerging Market index covered its upside gap from the onset of Friday’s session as US government bond yields tumbled.

The actions from Chinese officials were in response to comments from US President Donald Trump, who mentioned that he would not accept a partial deal, adding that ending the trade war by 2020 is not his priority. Taking a look at the next chart below, prospects of the two nations agreeing to an outcome has helped to drive capital flowing back into emerging markets since late August. 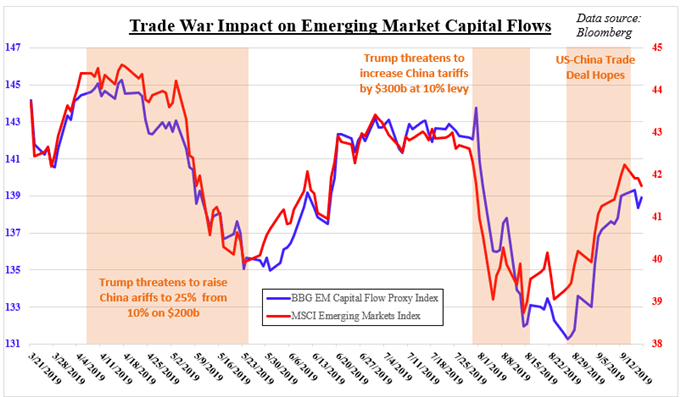 His lack of interest in wanting an interim deal diminished prospects of an agreement, which can be viewed by the reaction in financial markets on Friday. Talks between the two nations restarted this past week ahead of a high-level meeting anticipated between the economic powerhouses in the middle of October. This is why the US delayed imposing additional $250b in tariffs on China by two weeks to around the same time.

With trade wars still are a persistent threat to global economic health, this bodes ill for risk capital and will likely adversely impact currencies such as the Philippine Peso, Malaysian Ringgit, Singapore Dollar and Indian Rupee. Meanwhile, the highly-liquid US Dollar – still increasing its dominance as the world’s most widely-traded currency – is likely to benefit against them.

Focusing on ASEAN regional economic event risk in the week ahead, a top-tier item will be the Philippine central bank interest rate announcement. Much like the easing that we have seen from central banks in the world, the BSP is anticipated to continue the trend. The benchmark lending rate is widely expected to be lowered from 4.25 percent to 4.00 on Thursday.

As such, its surprise factor is diminished, with the central bank governor also hinting at further reductions in reserve requirement ratios. This does mean however that the Philippine Peso will continue to lose its yield advantage (alongside MYR, IDR) which is a long run threat for the currency. Inflation data will also be eyed out of Singapore and Malaysia.