The Nasdaq 100 is on pace to end the week roughly 1% higher as it enjoys fundamental tailwinds from a dovish ECB, thawing US-China trade tensions and expectations of looser monetary policy from the Federal Reserve. The culmination of factors has helped propel the tech-heavy Index near its all-time highs, but it has slightly lagged the S&P 500. The relative underperformance of the Nasdaq expands upon the theme I highlighted earlier this week with momentum stocks lagging their value counterparts. 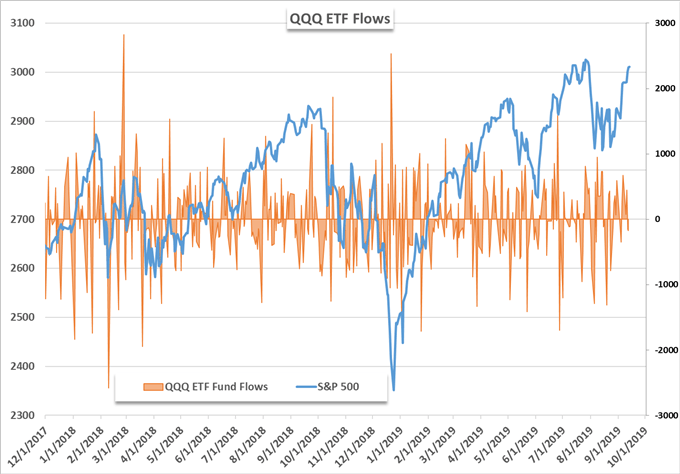 To be sure, the Nasdaq-tracking QQQ ETF registered net inflows for the week alongside SPY. Compared to their relative assets under management (AUM) however, QQQ lagged its larger peer. With assets under management of roughly $75 billion, the additional $574 million that QQQ has seen flow into its coffers in September stands at just 0.79% of total AUM. SPY on the other hand, saw an additional $6.6 billion in fresh capital during the same span – roughly 2.42% of the fund’s total $273 billion AUM. 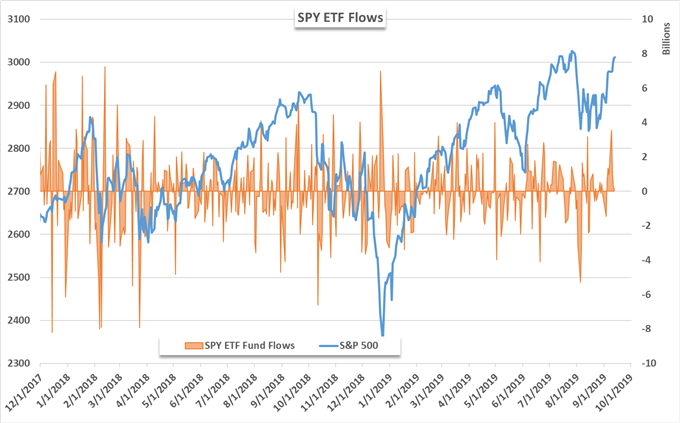 Therefore, the relatively modest underperformance in price has also been reflected in the corresponding exchange traded funds. Interestingly, the mega-cap tech companies of Microsoft, Apple, Amazon, Facebook and Google make up significant portions of both indices, but account for nearly 45% of the QQQ ETF. Thus, it can be argued the leaders that have been responsible for much of the bull market’s run are starting to slow. This can be further evidenced by comparing the five stocks to the entire Nasdaq. 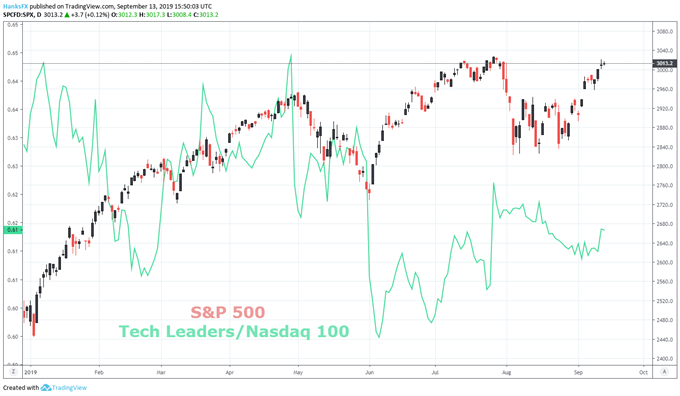 Given the relative performance, it begs the question what factors are to blame. Multiple arguments could be made, but a gradual rotation out of the high-flying momentum stocks seems to be the most popular among financial news media at present. Another potential catalyst is the antitrust probe facing Google and talks of supplementary probes into Amazon, Facebook and Apple. At a minimum, the regulatory scrutiny adds uncertainty to the collection of tech stocks – an undoubtedly bearish theme in the investing world.

Whatever the underlying factors may be, the commentary offered at next week’s FOMC meeting will likely dominate price action in the short and intermediate terms. Consequently, traders should keep a watchful eye on the degree of dovishness out of the Fed and how it aligns with the market’s lofty expectations. Until then, follow @PeterHanksFX on Twitter for updates and analysis on the major stock indices.