The Norwegian Krone and Swedish Krona are expected to be the most active G10 currencies – along with GBP – ahead of a politically-packed week. The ECB rate decision and ongoing Brexit negotiations will likely headline as the two major event risks for the week, though traders may not get a break from high-profile event risk amid a slew of key meetings across the world. Cross-asset volatility is to be expected.

Slower regional growth against the backdrop of ongoing Brexit negotiations and the US-China trade war has undermined upside inflationary pressure in the Eurozone. This has prompted the ECB to shift its rhetoric and has hinted it is not only considering cutting rates but also re-introducing QE. The central bank only recently retired it bond-buying program in December, though prevailing conditions may now require it to be reinstated.

But there is a chance that while the central bank will deliver stimulative policies, it may fail to meet the market’s lofty expectations. As such, if Mario Draghi’s commentary falls short, it could cause a pullback in equities and potentially send the Euro higher against its major counterparts. Euro-Nordic crosses in particular may rise if the less-than-dovish outlook pulls capital away from EU perimeter countries and into the core.

Brexit: When Will it End?

As outlined in my GBP forecast, Brexit negotiations this week will likely be a major catalyst for regional volatility as the political entanglement continues to engulf policymakers and traders into a void of confusion. Over the weekend, Pension Secretary Amber Rudd resigned, adding to the list of Tories who have rebelled against the government or were fired for attempting to prevent a no-deal Brexit.

There are growing concerns now that UK Prime Minister Boris Johnson might attempt to circumvent a law passed last week that requires him to ask the EU for an extension if he cannot deliver a deal by October 19. Failure to comply with the mandate could lead to a legal battle that may amplify regional volatility and weigh on cycle-sensitive currencies like the Swedish Krona and the Norwegian Krone.

At the World Energy Congress in Abu Dhabi, key members of OPEC + are expected to hold side talks as crude oil prices continue to slide and are down almost four percent since the beginning of August. Souring sentiment over trade wars and geopolitical uncertainty have pressured crude oil prices and the US’s explosive shale production has contributed to the over-saturated market. 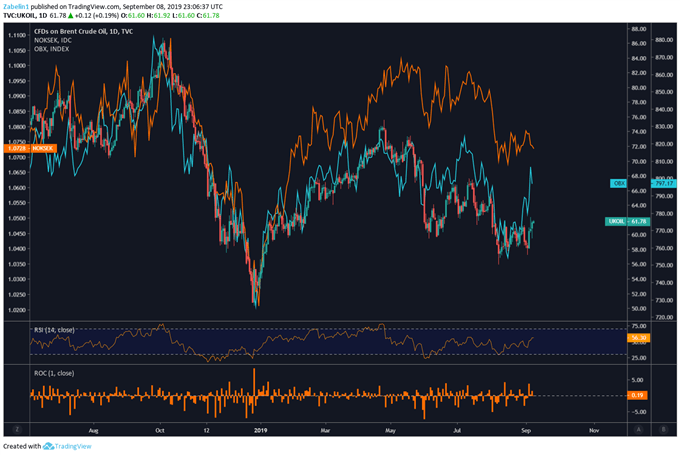 On Sunday, US officials stated that anyone who purchases Iranian oil or engages in business with the Revolutionary Guard will face sanctions, and that no new oil waivers will be re-issued. While typically these supply-disruption risks would buoy crude oil prices, the overwhelming backdrop of weakening fundamentals has sapped the potency of politically-induced spikes. But the conflict may spill over into EU-US relations.

EURNOK was climbing along a two-month rising support channel before it broke below it at the end of August and has since shaved off over one percent. However, zooming out to a weekly chart shows the pullback is noticeable but not threatening to break the six year-rising support zone. The pair may continue to experience a brief retreat, though a less-than-dovish ECB may help trim some of the losses. 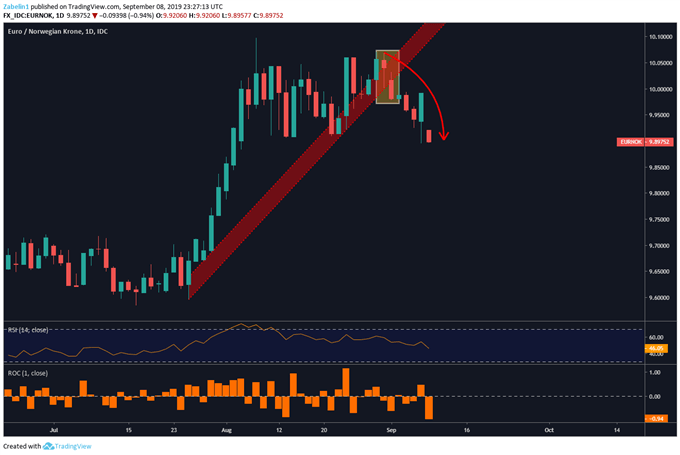 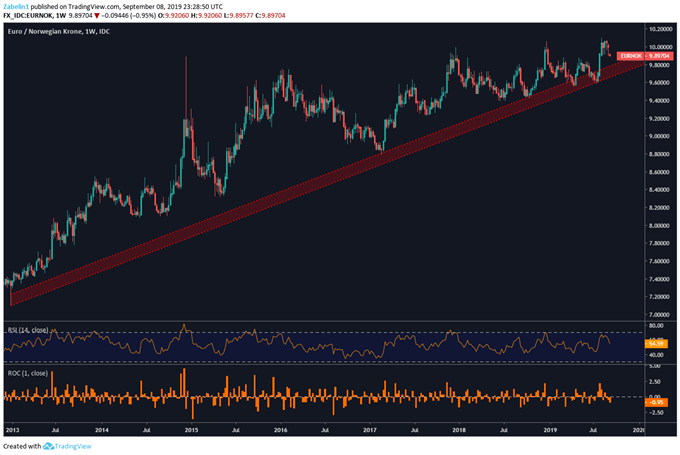 EURSEK gapped lower by over half a percent at the start of the week and broke below a critical support range between 10.6649-10.6414. If the pair closes below support-now-turned resistance with follow-through, it could result in an aggressive selloff. However, technical set ups this week involving the Euro may be subject to radical shifts because of the enormity of the upcoming ECB rate decision. 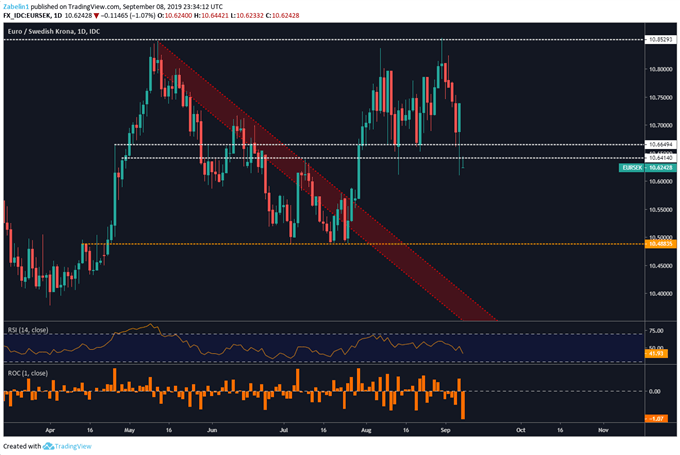