Japanese Yen Strength May Continue, But Will the BoJ Intervene?

In March 2018, we saw USD/JPY fall through 105.00 as the anti-risk Japanese Yen strengthened alongside a drop in the benchmark Nikkei 225 stock index. This was accompanied by concerns from the Bank of Japan (BOJ) about the impact of a stronger Yen on corporate profits, perhaps fueling speculation of intervention. USD/JPY then rose until October when it topped just under 115. This was also accompanied with a pickup in equities.

Lately, JPY has been facing a similar scenario, falling through 106 after the Nikkei 225 topped in April. While the BOJ could mention the risks of a stronger Yen again, intervention may not be on the table for a couple of reasons. The first is the potentially limited impact on the economy. Trade wars between the US and China have not only dented business confidence, but manufacturing has been on a steady decline.

While Japanese economic growth has seen a cautious improvement since last year (1.2% y/y in Q2 2019), it is still far off from the 2.4% rate seen in Q4 2017. Around that time, Japan’s merchandise trade exports with the rest of the world began tapering off as local manufacturing PMI followed the trend of a global slowdown (see chart below).

If the anti-risk Yen were to fall in value artificially, this would not address the primary fundamental backdrop weighing against global trading activity that is also plaguing Japan. The CPB’s Merchandise World Trade Volume Index peaked in October 2018 at 127.2, falling to 123.2 in June which was the lowest since October 2017. In other words, if demand isn’t there, a slightly cheaper JPY probably won’t do much to boost exports. 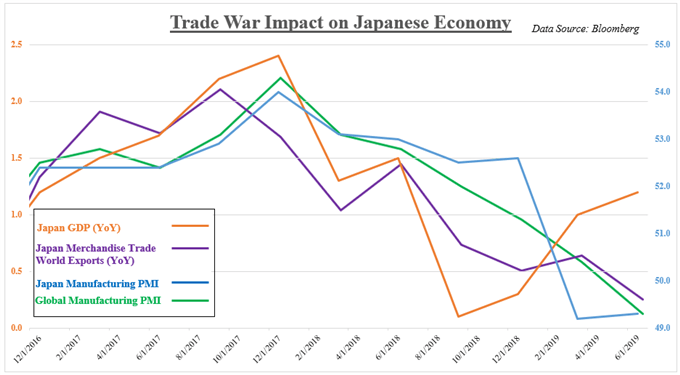 The second issue that may deter the Bank of Japan from intervention is the political risk that the country could be labeled a currency manipulator by the United States. This risks bringing a cloud of uncertainty over the principals of a trade agreement the nation reached with the US at August’s G7 Summit in France. There, Prime Minister Shinzo Abe agreed to purchase corn (maize) from US farmers battered by the ongoing spat with China.

The US Treasury Department has already labelled China as a currency manipulator back in August, and what followed was an escalation in tariffs between the world’s largest economies. A similar situation that makes its way into Japan, which would also be consequential for global risk trends, may place the country at further risk of an economic slowdown.

This is with the Bank of Japan having already deployed its full armament of stimulus. With negative interest rates and quantitative easing in effect, the central bank has fewer options left in their arsenal to boost inflation should price growth deteriorate ahead. Given the risk of escalating trade tensions with the world’s largest economy, for a potentially negligible boost to export competitiveness, Japan may defer on Yen intervention.