The US Dollar continued to mostly outperform its ASEAN and Southeast Asia counterparts such as the Indian Rupee this past week – as anticipated. This is despite the United States announcing to delay a portion of extra $300b in tariffs against China. What followed was deeper inversion of the local yield curve, an acute signal of a looming recession. Wall Street experienced its worst day this year.

There was an exception regarding the Malaysian Ringgit and Singapore Dollar. Better-than-expected Malaysian GDP data helped fuel gains in MYR. Meanwhile, despite Singapore’s economy contracting by the most since 2012, hesitation from the MAS to adjust its monetary policy stance supported SGD during the front-end of last week. A calming in market mood on Friday helped to wrap up a tense week for traders. 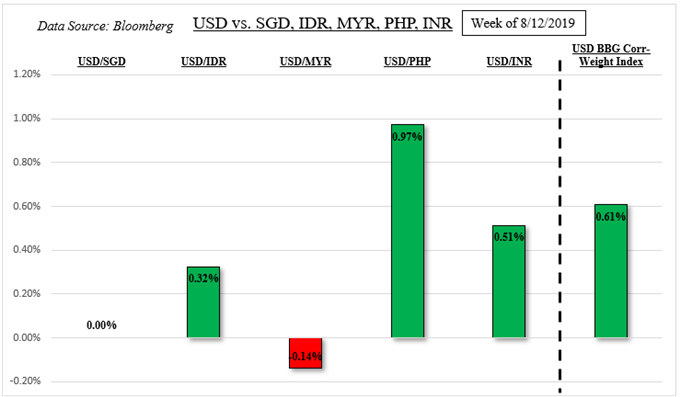 Looking onward, there remains the fundamental risk of speculative appetite for emerging markets to continue deteriorating. Last week, we saw a proxy of capital flows around the region continue unwinding with Bloomberg’s gauge falling to its lowest since the beginning of 2019 – see chart below. This leaves vulnerabilities for currencies such as SGD, MYR, PHP, IDR and INR.

US President Donald Trump still appears to be keen on prolonging his trade war with the rest of the world which poses a risk for fragile global growth. In addition to hinting at continued pressure against the world’s second-largest economy, he turned his focus to Europe saying that the EU treats the US “worse than China”. Capital flowing out of developing economies, fueling demand for safe havens may boost USD. 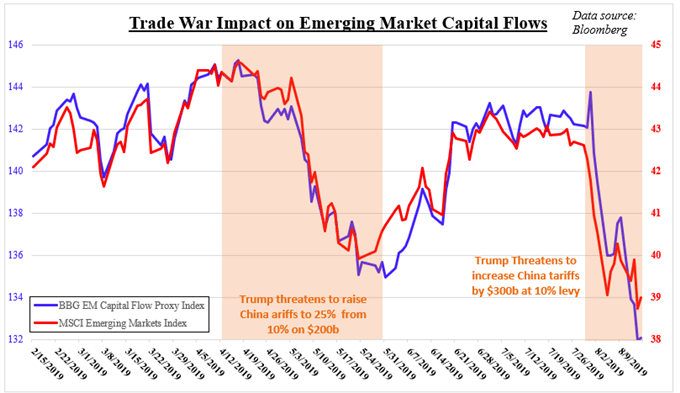 What has been keeping risk trends from falling apart, especially after the Dow Jones fell more than 3 percent on Wednesday, is rising bets of easing from the developed world. According to Fed funds futures, markets are pricing in about a 32% chance of a 50-basis point rate cut from the Federal Reserve next month. Meanwhile, the ECB hinted that the resumption of quantitative easing could be around the corner.

The week ahead contains the FOMC meeting minutes from July’s interest rate announcement. As a reminder, the Fed surprised less-dovish last month which caught the markets off guard. Since then, aggressive easing bets have been rising alongside fears of a US recession. If the minutes err on the side of caution regarding the introduction of a lengthy cutting cycle, that may support the Greenback as equities fall.

There is also the upcoming Annual Federal Reserve Symposium at Jackson Hole. There, Fed Chair Jerome Powell will speak. The central bank is facing a challenging situation where data has been outperforming (CPI and retail sales this past week) but external risks are rising. The accumulation of foreign debt in emerging markets after 2008 leaves them vulnerable to adjustments in US borrowing costs.

Bank of Indonesia and the Rupiah

Meanwhile, the Indonesian Rupiah will be watching Thursday’s local monetary policy announcement. The Bank of Indonesia is anticipated to keep the benchmark 7-day reverse repo rate unchanged at 5.75% as Governor Perry Warjiyo delivers a press conference. Markets will be closely watching what he has to say about GDP and IDR after the government set the 2020 growth target higher at 5.3% versus 5.2% this year.

The Singapore Dollar may just look past local inflation data. In July, Singapore CPI is expected to clock in weaker at 0.5% y/y from 0.6% in June. Core price growth is also anticipated to slow to 1.0. For now, the Monetary Authority of Singapore seems to be refraining from shifting its policy stance. As for the Indian Rupee, geopolitical tensions in the Kashmir region poses a downside risk for INR.