The S&P 500 is in the midst of yet another incredible Friday rally, trading 1.4% higher at the time of this article’s publication. While price action would suggest a rejuvenated appetite for risk across markets, ETF flow data suggests a somewhat disjointed relationship between price and conviction as traders ditch assets like the S&P 500 and emerging markets while “safer” assets see consistent demand. 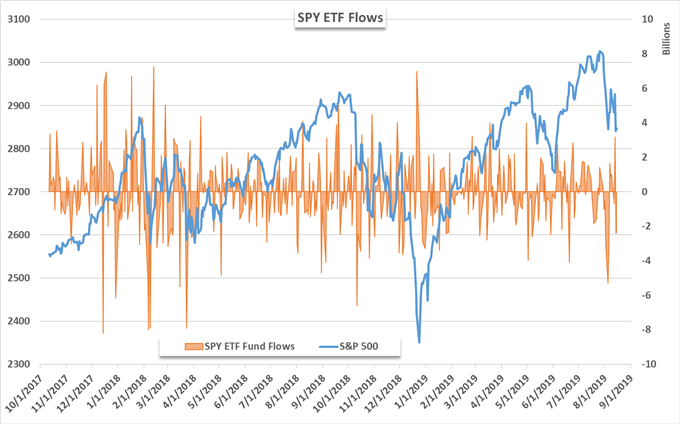 To that end, investors appear to have accelerated their flight from the S&P 500-tracking SPY ETF in August. In the year-to-date, the ETF has seen nearly -$20 billion exit the fund but -$11 billion of the capital has left in August alone – compared to the -$8.5 billion that fled in the first 7 months of the year. The combination of an uncertain Fed and an unexpected escalation in the US-China trade war worked to shock capital markets as evidenced by elevated volatility across most assets. Shortly thereafter, the inversion of yet another US yield curve has contributed to deeper fear as recessionary signals mount. 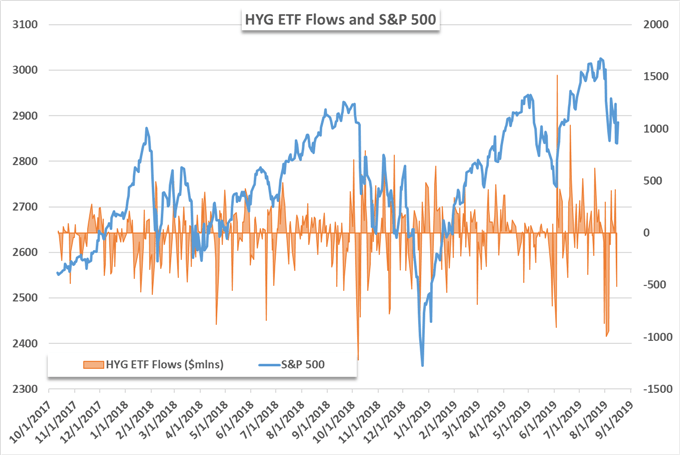 The concern derived from a deeper inversion of the 3m10s and the additional inversion of the 2s10s yield curves can be seen to some degree through demand for a contradictory asset - the HYG ETF. The fund looks to offer a yield similar to that of a high yield corporate bond and is typically viewed as a “risk-on” investment whereas a US Treasury is widely regarded to possess very little risk. As global yields continue to slip and investors continue to search for attractive returns, HYG is a potential option if one is willing to accept the heightened risk.

Interested in longer-term trade ideas? Check out our Quarterly Forecasts for the Dow Jones, US Dollar, Gold and more.

That risk would be exacerbated if the outlook for the economy deteriorated – a theme suggested by an inverted yield curve. That said, HYG boasts a modest net-inflow for the year-to-date of nearly $3 billion. Prior to August, however, the fund boasted $4.5 billion in inflows, meaning August has seen investors pull -$1.5 billion from HYG. Hampered risk appetite has spurred outflows not only from SPY and HYG, but also from the emerging market ETF, EEM. 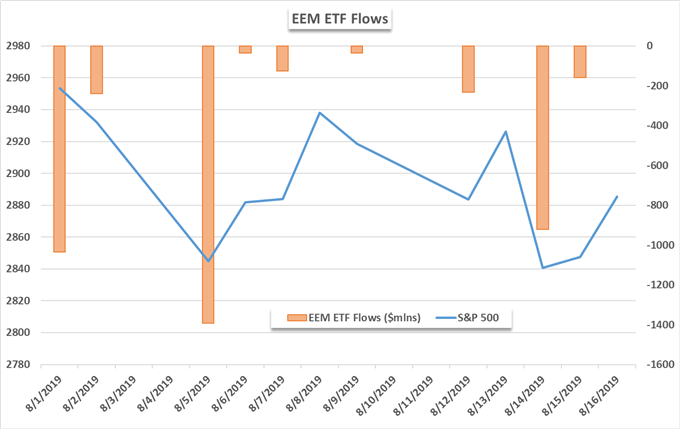 Unfortunately fund flow data for EEM is rather spotty, but unusually consistent tracking in late July and August shows the fund has not posted a single day with net inflows since August 1. Further, nearly -$4.2 billion has exited EEM in August alone, which could be viewed as unsurprising given the fund’s meager 1% return in the YTD. Still, the data should be taken with a hefty grain of salt. While risk assets have been dealt a blow and continue to reel from tarnished sentiment, one asset has been a major benefactor of the uncertainty. 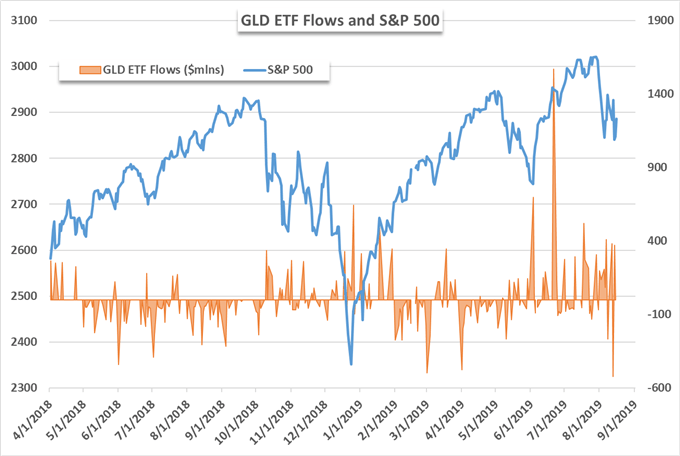 Gold has enjoyed an incredible run in the year-to-date, boasting a higher return than the S&P 500. In this span, the GLD ETF has registered nearly $2.8 billion in fresh capital. In August alone, investors have allocated another $1 billion to the fund. While ETF allocation fluctuates for various reasons, the flows reveal a fairly consistent sentiment across assets – like the TLT ETF that I highlighted on Thursday - that appears to have accelerated in August.

Whether the risk-averse positioning will continue is yet to be seen, but short-term price action does not necessarily reflect longer-term conviction and fundamental headwinds are abound. For more ETF analysis and fundamental updates on the major equity markets, follow @PeterHanksFX on Twitter.