US Dollar and ASEAN Weekly Recap

The US Dollar experienced a lackluster week against some of its most-liquid major counterparts such as the Euro and Japanese Yen. However, its performance was much clearer against emerging market and ASEAN currencies. The Greenback overwhelmingly appreciated against the Indian Rupee, Philippine Peso, Malaysian Ringgit, Indonesian Rupiah and Singapore Dollar on the chart below – as anticipated.

Trade tensions between the United States and China have been escalating since the beginning of August. Last week, after US President Donald Trump threatened to raise Chinese import tariffs by $300b, we saw the PBOC weaken the Yuan beyond the critical 7.00 level. This can offset the impact of US tariffs. Consequentially, the Treasury Department labeled China as a currency manipulator.

The International Monetary Fund has downgraded its outlook for global growth this year due to trade wars. We have seen swift reaction from central banks around the world to cut interest rates. Last week, the RBI delivered an unexpectedly aggressive cut at 35bps last week as Philippine Central Bank Governor Benjamin Diokno envisioned further reductions in bank reserve requirement ratios.

As US-China trade wars simmered, capital has been flowing out of emerging markets on the chart below (blue line). The MSCI Emerging Markets Index - which contains a mixture of equities from countries such as China, Malaysia, India and Indonesia – has declined about 8.75% from its June peak. Its drop echoes April’s performance when Trump threatened to raise Chinese tariff levies to 25% on $200b in imports.

In the medium-term, currencies exposed to emerging market outflows (PHP, MYR, IDR, INR, SGD) will have to contend with the uncertainty over whether US-China trade tensions escalate. The latter has threatened to halt US agricultural imports. The former is holding off on its decision to resume government business with China’s Huawei. It is not unreasonable to expect the US to raise Chinese tariffs further. 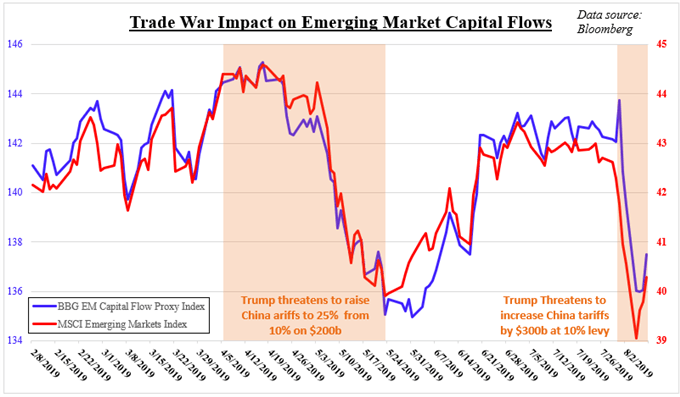 Domestically, the Malaysian Ringgit will be closely watching upcoming economic data. On August 16, Malaysia will be releasing the latest inflation and growth data. CPI is anticipated to remain unchanged at 1.5% y/y in July. Inflation has been slowly picking up in the country since experiencing 0.7% deflation in January. Local GDP is also anticipated to rise 4.6% y/y in Q2.

Meanwhile, the Indian Rupee will be awaiting local inflation statistics. Indian CPI is expected to soften to 3.12% y/y in July from 3.18% prior. The RBI’s data-dependent monetary policy approach risks resulting in elevated INR volatility on an outcome significantly off from estimates. Meanwhile, India-Pakistan tensions could undermine the Rupee due to political uncertainty.

Will USD Budge on CPI Data Too?

The trend in US data outcomes tending to disappoint relative to economists’ expectations this year has been softening since July. Yet, the markets are fully pricing in another 25-basis point rate cut from the Federal Reserve next month. This is likely due to the threat of trade wars to the US economy as the central bank tries to sustain a record economic expansion beyond 121 months.

Tepid inflation is one of the Fed’s concerns as the US Dollar eyes the next round of headline CPI data. Prices are expected to rise about 1.7% y/y in July, up from 1.6% prior. An upside surprise could lower aggressive Fed rate cut bets (50bps easing anticipation in September) which is a downside risk for equities and emerging market FX. This may boost USD. But, this could complicate the Fed’s balancing efforts.