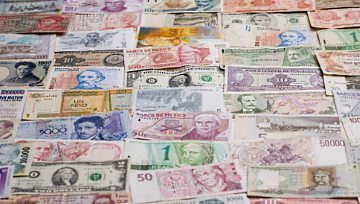 The outlook for the Indian Rupee may still be tilted to the downside even though the RBI cooled anticipation of further easing in the near-term. On August 7, despite the Reserve Bank of India unexpectedly cutting its benchmark repo rate to 5.40% from 5.75%, the USD/INRdeclined about 0.4 percent in the immediate aftermath. Lately, the currency has been seeing some aggressive selling pressure alongside ASEAN FX.

This RBI action represented a 35-basis point cut while markets were pricing in just 25bps. This was only the second central bank of the day to surprise markets with larger-than-expected stimulus expansion. Earlier, the RBNZ delivered 50bps worth of easing and NZD/USD plunged. For India, this marks the fourth time in 2019 that the central bank has delivered a reduction in lending rates.

Indian inflation is running below the RBI’s 4% target as US-China trade tensions undermine global growth, setting the backdrop for policy support expansion. Indian CPI peaked at just below 5% in 2018, with price growth slowly recovering from January’s low around 2%. The central bank anticipates CPI to continue running below target, clocking in at 3.1% for the second quarter of the 2020 fiscal year.

RBI Governor Shaktikanta Dascooled near-term easing bets when he mentioned that further cuts would be calibrated as they watch incoming economic data. This is a similar cautious tone that Fed Chair Jerome Powell struck in the US last month which unnerved Wall Street. As emerging market capital flight fears and trade wars cloud the INR outlook, regional political tensions are also brewing.

Tensions between India and Pakistan may flare up again, sour sentiment and weaken the Rupee after the former revoked Article 370 and 35A that gave the Indian-administered region of Kashmir autonomy and special privileges. The idea behind the move by Prime Minister Narendra Modi’s Hindu-nationalist government was to further bring Kashmir and Jammu on the same footing as New Delhi.

Furthermore, they want to bifurcate their portion of the disputed region into two union territories: Jammu and Kashmir is the first, and Ladakh is the second. Pakistan Prime Minister Imran Khan has expressed concern that the Muslim-majority area will face “ethnic cleansing” by the Indian government. Pakistan General Qamar Javed Bajwa said the army “stands by the Kashmiris” and “shall go to any extent to full our obligations in this regard”. 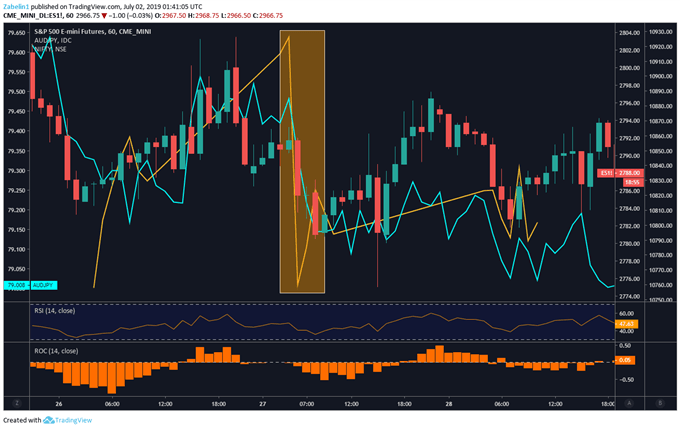 An escalation of tensions – like we saw in 2018 – could boost the anti-risk Japanese Yen at the expense of risk-oriented assets. However, this time, the market impact could be significantly amplified against the backdrop of a weakening global economy that may be more vulnerable to political shocks than it was a year ago. Furthermore, the US has to carefully navigate between India and Pakistan to avoid a diplomatic fallout.

Want to learn more about how politics impacts financial markets? Be sure to follow Dimtri Zabelin on Twitter here @ZabelinDimitri.

The US and India are currently engaged in a small-scale trade conflict after the former removed the latter from a preferential trade agreement. If Washington sides with Pakistan too strongly it could make resolving the trade dispute much more difficult. On the other hand, the US cannot isolate Islamabad because of their role in facilitating a peace deal with the Taliban in Afghanistan – a possible feather in Donald Trump’s cap before the 2020 presidential election.

On the daily chart, USD/INR is aiming to continue reversing its dominant downtrend that took prices from about 74.50 last year to just above 68.00 in July. Weakness in the Rupee was technically triggered by a Morning Star candlestick pattern which formed on July 2018 lows. Since then, the currency pair took out multiple descending trend lines going back to December and October of 2018 – pink lines on the chart below.

USD/INR is thus finding itself just under the former rising trend line from April 2018. This could reinstate itself as near-term resistance under 71.82. A close above it exposes the 72.55 peak from December 10. Otherwise, turning lower places focus on support at 70.58. A close under it opens the door to 69.97 which is just above the former rising support channel from the middle of March – red area below. 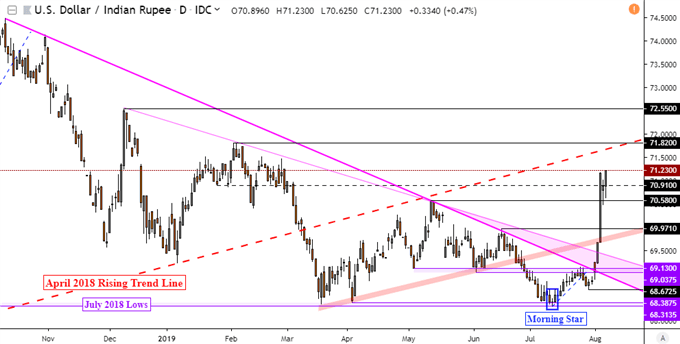 To contact Dimitri and Daniel, use the comments section below!