US Dollar May Rise as NOK, SEK Suffer Amid Trade War Tensions

The Swedish Krona and Norwegian Krone may experience unusually high volatility in the week ahead. Renewed US-China trade war tensions have dented sentiment with the benchmark S&P 500 index reaching June lows. Italian politics may once again rattle European markets and amplify risk aversion if intergovernmental tensions continue to rise. However, political risks in Iran may be a small boon to the Krone.

US-China trade war tensions are dominating headlines, and pessimism about the two economic powerhouses reaching a resolution continues to fuel the biggest selloff in equity markets this year. Trade tensions were triggered last week after US President Donald Trump abruptly announced a 10 percent tariff against $300 billion worth of Chinese imports. 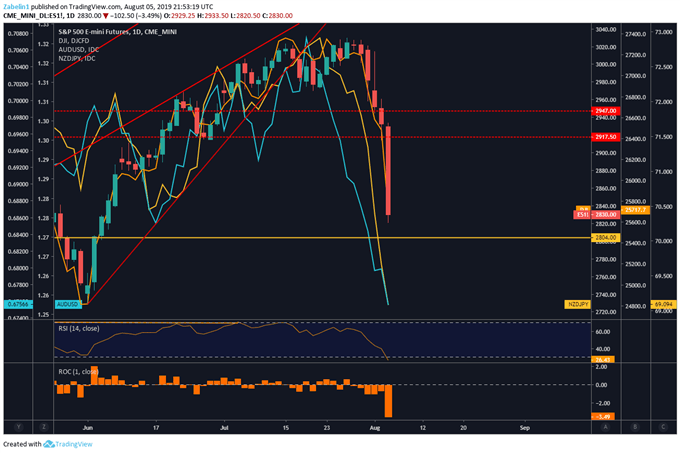 At the start of the week, USDCNH broke through the psychologically-significant 7.00 price level. The offshore-Yuan’s push past this point according to the PBOC – China’s monetary authority – was the result of “tariff expectations [and] protectionism”. Mr. Trump promptly tweeted that USDCNH’s move past 7.00 was China’s attempt at “currency manipulation”.

Chinese companies are now halting their importation of US agricultural goods according to state-run media. Trump will likely retaliate because they have hit him where it hurts most ahead of the 2020 election: his core constituency. US farmers have been on the receiving end of retaliatory actions from China. On Monday, the US Treasury Department designated China as a currency manipulator, adding more fuel to the fire. 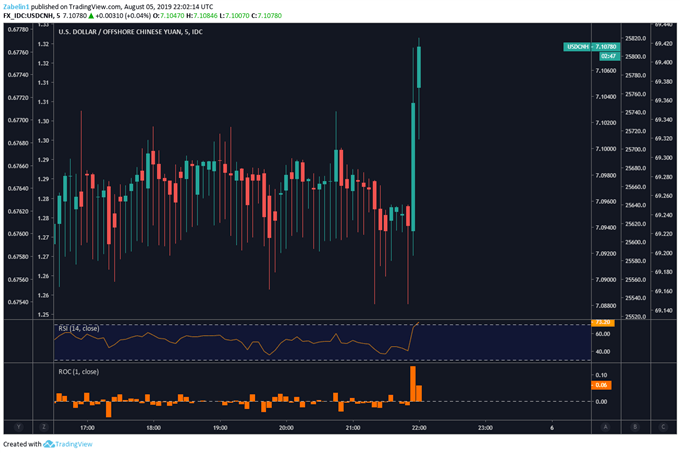 Today, the Italian parliament will be voting on a number of key issues ranging from security to a high-speed rail link with France. However, there is speculation that a disagreement between the ruling coalition parties could widen the rift to a point of no return and lead to a dissolution of the government. This would likely cause not only Italian bond yields to spike – again – but would also be reflected in capital flight from Nordic FX.

The Riksbank – Sweden’s central bank – has repeatedly stated that two of the biggest risks emanating out of Europe are Brexit and Italy’s precarious debt load. Eurozone debt crisis fears resurfaced last year and made their way into 2019 amid a budget deficit dispute between Rome and Brussels against the backdrop of a slowing global economy. A resumption of political risk with the current environment is even more dangerous.

Learn more about how to trade political risk here!

Iran’s Revolutionary Guard has seized another tanker in the Gulf and caused tensions to flare up with its Western counterparts and its neighbors. As if the ongoing market-wide pandemonium were not enough, Tehran has also threatened that it will further breach the nuclear agreement set out in 2015 unless the EU helps to mitigate the crippling impact of US sanctions.

However, any politically-based supply disruption fears caused by escalation in the Gulf may only provide small upside pressure to crude oil prices and currencies linked to Brent. What is likely to occur – and as I have forecasted in Q3 – is fundamental themes of slower global growth from increasing trade war risks and rising political tensions will overwhelm crude oil prices and undermine any upside momentum from Iran risks.

The economic agenda in Norway brings industrial production and CPI data while the Swedish docket has industrial orders and household consumption. While some of the local reports will capture the attention of traders, global fundamental themes will likely take precedence. If US-China trade relations worsen, the Swedish Krona and Norwegian Krone will likely continue to feel the pain as the outlook continues to dim.