UPDATE: Moments after this note was published, the US Treasury officially labeled China as a currency manipulator for the first time since 1994 in response to allowing USDCNH to trade through 7.0000.

The US-China trade war took a turn for the worse last week when the Federal Reserve did not cut its main interest rate by 50-bps. Consider this: US President Donald Trump has, for many weeks, castigated the Federal Reserve and Chair Jerome Powell for their decision to hike rates last year, and the US president went so far as to ask for “100-bps” of cuts in the days ahead of the July Fed meeting.

In the hours after the July Fed meeting, when the news broke that the US delegation canceled the trade negotiations with their Chinese counterparts, the question was posed, “Did the US-China trade war talks end early because the Fed didn’t cut rates by 50-bps?”

Now, as markets close on Monday, August 5, we’re looking at the largest one-day losses by US equities since December 2018 – the last time that global equities markets tanked thanks to escalation in the US-China trade war. Or now, a currency war.

On Thursday,August 1, the surprise announcement from US President Trump calling another 10% tariff on $300 billion of imported goods starting September 1 spooked market participants that the US-China trade war was getting worse before it got better.

China Responded to the Fed Being Forced to Cave on Trump

Global markets find themselves in a precarious situation regarding the US-China trade war. Despite the succor that low interest rates provide, the fact of the matter is that central banks don’t cut interest rates when ‘times are good.’ The very nature of lowering interest rates is thereby to increase the access of credit to the economy; higher rates ‘crowd out’ borrowers.

The fact that the Federal Reserve tried to assert its independence and was met with US President Trump that cultivated a situation to justify the monetary policy outcome he desired – lower interest rates – was an important signal to high level officials in China. At least in this strategist’s opinion, this type of action by US President Trump signals to counterparts that he is willing to do whatever it takes in order to get the outcomes he desires, including sacrificing the independence of the Federal Reserve.

This is not the type of action that is likely to be well-received by Chinese officials, and markets have reacted in kind over the past 24-hours vindicating this type of view. Why? In a sense, it shows that US President Trump’s ‘the ends justify the means’ attitude conveys insincerity about his desire to avoid further escalation in the US-China trade war; this is what he wants, so he will find a way to get it.

Put this mindset in context of the recent tariff threats: 10% on $300 billion of imported Chinese goods on September 1, and the potential for a jump up to 25% tariffs overall. Chinese President Xi Jingping and his counterparts probably assessed the situation and decided that there would be no way to appease the US president in order to avoid at the least the first round of tariffs on September 1.

In allowing USDCNH to trade through 7.000 for the first time in the history of the offshore market, Chinese President Xi Jingping has officially put FX intervention into the field of the play as a policy response to the US-China trade war. Although, if you were paying close attention around this time last year, China already previewed this type of policy response.

In July 2018, at the height of US-China trade war concerns during the summer, we published a research note titled “US-China Trade War Enters New Phase amid Yuan Depreciation.” Our thesis was that that “USDCNH exchange rate has appreciated enough that it may offset any impact on the US-China trade balance resulting from the Trump tariffs.”

If you haven’t read the note from last year, do so; if not, here is the key takeaway: for every 1% deprecation in the Chinese Yuan, the Chinese economy gains approximately $15 billion in economic activity via trade:

USDCNH Breaking 7.0000 is an Escalation in the US-China Trade War

Putting the USD/CNH advance on August 8 in context, it's important to recognize that this price action is the exact response required to offset 10% tariffs on $300 billion of goods as announced by US President Trump on Thursday, August 1. The heuristic: every 1% depreciation by the Chinese Yuan increases Chinese economic activity via trade by approximately $15 billion.

Therefore, at a 10% tariff on $300 billion of goods, that means Chinese economic activity will be reduced by around $30 billion. In light of these dynamics: it would have taken a 2% depreciation by the Chinese Yuan (i.e. appreciation by USDCNH) in order to offset Trump's tariff announcement last Thursday. If this relationship was understood accurately, then from the close on Thursday/open on Friday, this means that USDCNH would have needed to traded 2% higher from 6.9545 to 7.0935. 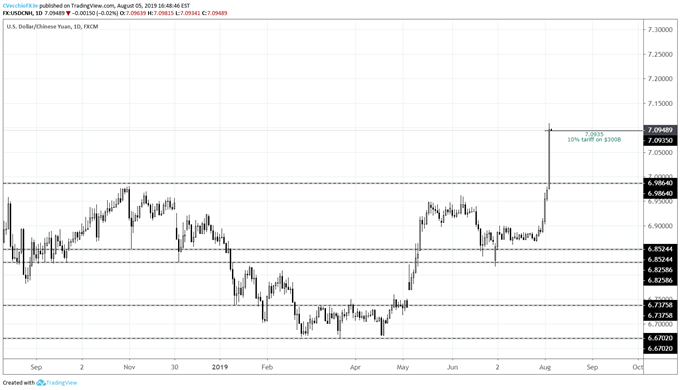 What’s the Next Level for USDCNH?

With the conceptual framework from July 2018 validated – and deemed official with the People’s Bank of China statement directly attributing the moves in the exchange rate in response to the “tariffs” – we can be informed about how we should anticipate USDCNH to trade in the future as Chinese President Xi Jingping responds to more tariffs by US President Trump.

Moving forward, the threat of stepping up the Trump tariffs from 10% to 25% on $300 billion of goods would mean that markets need to factor in the remaining 15% of the tariffs; Chinese economic activity will decline by approximately $45 billion at this rate. To offset a potential $45 billion in lost trade, then the Chinese Yuan will need to lose another 3% from where it closed on Monday, August 5.

As such, USDCNH should hit at least 7.3022 if US President Trump escalates the trade war further by increasing the tariff to 25% on $300 billion of Chinese goods. 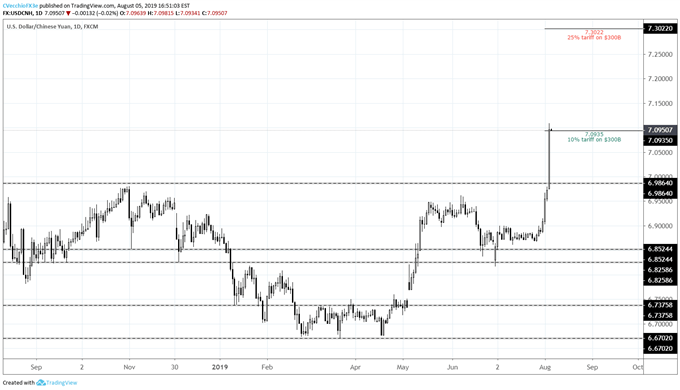