While the DXY Dollar index, which is heavily Euro based, ended last week little changed, it was a very different story against ASEAN and South Asian currencies as it appreciated – as anticipated. Arguably, it had less to do with the Federal Reserve interest rate cut, but rather a panic in emerging markets as US-China trade tensions boiled and inspired risk aversion across major global benchmark indexes.

On Thursday, US President Donald Trump announced that the country will proceed with imposing more tariffs on about $300b in Chinese imports at 10 percent on September 1. This effectively ended the trade truce the two nations reached at the G20 Leaders Summit in June. He also left the door open to a further increase in the tariff rate. This means that virtually all goods the US imports from China will get taxed. 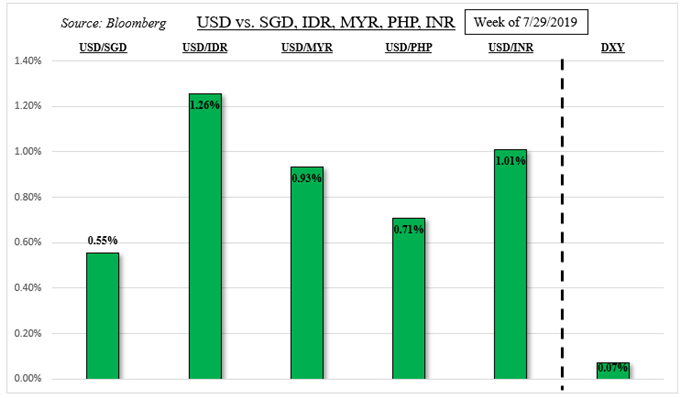 Last year, we saw a selloff in emerging markets that occurred amidst the backdrop of escalating US trade tensions with not just China, but also with the world as it embarked on steel and aluminum tariffs. Global growth remains fragile as manufacturing PMI from nations across the world hovers around contractionary territory. Last week was a step towards repeating 2018’s dynamic in this sense.

China’s UN Envoy Zhang Jun said that if the United States wants to fight on trade, they will too. After the US went ahead with threatening to impose further tariffs, China reportedly looked to Brazil for potentially buying soybean from as an alternative. An escalation in tensions between the world’s largest economies, amidst an already-fragile global growth environment, may add fuel to recent selloffs in ASEAN assets.

This fundamental development should be kept in mind as the ASEAN region reports plenty of important economic data. This ranges from Indonesian and Philippine GDP. From the latter, we will also see the latest inflation report. Philippine CPI is anticipated to slow to 2.3% y/y in July, which would be the weakest pace of price growth since the end of 2016. USD/IDR and USD/PHP will be closely watching these.

This helps to explain anticipation that the Philippine central bank (BSP) may cut the overnight borrowing rate to 4.25% from 4.5%. Dovish forward guidance, especially amidst rising tensions between the US and China, may further weaken the already-vulnerable Philippine Peso. Meanwhile, the Singapore Dollar may continue to closely follow the Greenback.

The US economic docket thins out this week. We will commentary from Fed members such as Lael Brainard and James Bullard. This year, we have seen the central bank resort to easing to help counter the risk of growth from trade tensions. Even though last week’s cut may not have been the beginning of a “lengthy cutting cycle”, an escalation in US tariffs may support further action. This may help alleviate selling pressure in emerging market and ASEAN assets.