SEK, NOK Brace for Turbulence Ahead of FOMC and Sweden GDP

Swedish Krona and Norwegian Krone traders are bracing for a perilous week ahead of the release of the FOMC rate decision, Swedish GDP data and critical European reports. Furthermore, the Bank of England will be announcing its rate decision with follow-up commentary by BoE Governor Mark Carney on the outlook for economic growth. The latter will likely send a spine-crawling chill into Nordic central banks.

Overnight index swaps are pricing in an 80 percent probability of a 25-basis point cut at the July 30 FOMC meeting, with the remaining 20 percent suspecting a 50 bp cut. Traders have been anxiously eyeing this particular event because of the implications it could have for global financial markets. The Fed’s pivot from hawkish to neutral and now dovish tells a frightening story of the global economic outlook with a rate cut de-facto acting as an official acknowledgment of the severe circumstances.

This week, United States Trade Representative Robert Lighthizer and a group of US delegates will betraveling to Shanghai to meet their counterparts to continue US-China trade relations. This marks the first face-to-face meeting between Beijing and Washington since May. The meeting is expected to take place through July 31 and could cause oscillations in sentiment in either direction if negotiations indicate progress or if they have not been able to clear major hurdles.

US Economic Data has Been Chronically Underperforming Relative to Forecasts 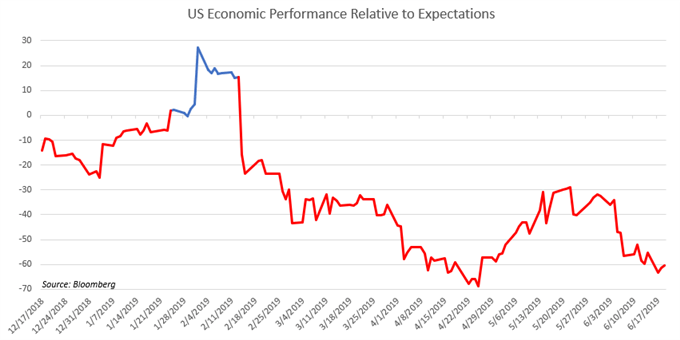 Across the Atlantic, the Eurozone and several key member states will be publishing critical economic reports. Data out of the monetary union has been tending to underperform relative to economists’ expectations with the ECB recently stating that the outlook is now getting “worse and worse”. Naturally, policymakers have grown increasingly more inclined to push for more accommodative policy like rate cuts and QE.

Some of the more notable data releases include Eurozone economic confidence, the unemployment rate, Markit manufacturing PMI and retail sales. Furthermore, critical data out of key member states, notably Germany and Italy, will be particularly important to monitor. The latter – with its precarious economy and politically fragile government – will be publishing GDP data which may spur risk aversion.

Furthermore, on August 1, the BoE will be announcing its rate decision with follow-up commentary from Governor Mark Carney. Policymakers will likely keep rates on hold at 0.75 percent with Brexit uncertainty continuing to cloud the outlook. The central bank has been catering monetary policy around the outcome of Brexit due to the sheer impact the UK-EU divorce could have on the local economy.

Want to learn more about how politics affects markets? Be sure to follow me on Twitter @ZabelinDimitri to find out!

At the June meeting, the BoE sent a chilling message out to financial markets when he emphasized growing downside risks and warned that the perceived threat of a no-deal Brexit has risen. Given the most recent publication of the IMF’s global economic outlook, it is not likely commentary from the Governor will be any more comforting than it was in June.

In the European perimeter, ongoing Brexit negotiations are having a significant impact on the Riksbank’s monetary policy. In addition to contending with tepid inflation, the central bank has also expressed concern about the outcome of the EU-UK divorce. A no-deal outcome would likely spur risk aversion and may slow down growth in Europe for a period of time and weigh on Sweden’s export-driven economy.

This week – in fact, on July 30 – Swedish GDP will be published with expectations that year-on-year growth will show a 1.9 percent expansion, modestly lower than the previous report at 2.1 percent. In Norway, the economic docket also remains relatively sparse with manufacturing PMI data as the biggest local event risk. Therefore, this week, volatility in SEK and NOK will likely be driven by external factors.