Yesterday saw the Pound experience its largest 1-day decline against the US Dollar in 2019, dropping 1.25% with the currency trading at the lowest level since March 2017. This came amid Boris Johnson and his cabinet ministers continuing to show a hardened stance towards the EU with Michael Gove stating that the government are working on the assumption that the EU would not strike a fresh Brexit agreement. Consequently, in light of the plummet seen in GBP, this was to the beneficiary of the FTSE 100, which jumped to fresh 2019 highs.

As mentioned last week, given that Boris Johnson government is unlikely to reduce the current uncertainty and with his rhetoric that he is willing to carry out a no-deal Brexit, the FTSE 100 would stand to outperform on the basis that the weak Pound supports FTSE 100 profitability with 2/3 of the revenue from the top 100 companies generated overseas.

As Brexit uncertainty continues to weigh on the Pound, it can be argued that the FTSE 100 is a potential safe haven with investors rotating from domestic assets (FTSE 250 or GBP) to more internationally exposed. Since the backend of 2016, the FTSE 100 and the Pound have had a sizeable negative correlation with the correlation becoming increasingly more negative at times when Brexit uncertainty (no-deal Brexit risks) rises. Therefore, showing signs that the default trade on rising hard Brexit risks is a move into the FTSE 100. However, with that said, just like the initial reaction to the Brexit referendum, if the UK were to confirm that they were heading for a no-deal Brexit, it is likely that the Pound and FTSE 100 would head lower. 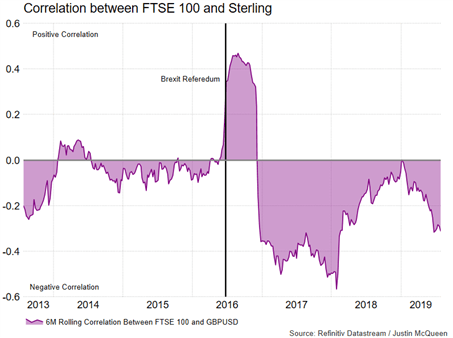